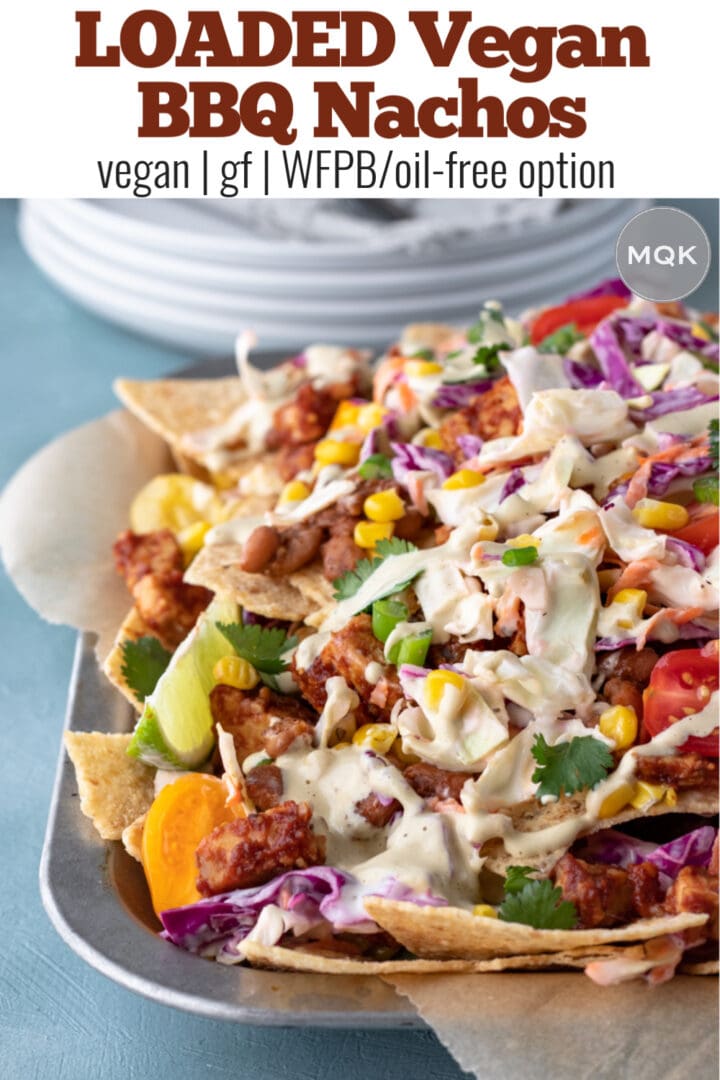 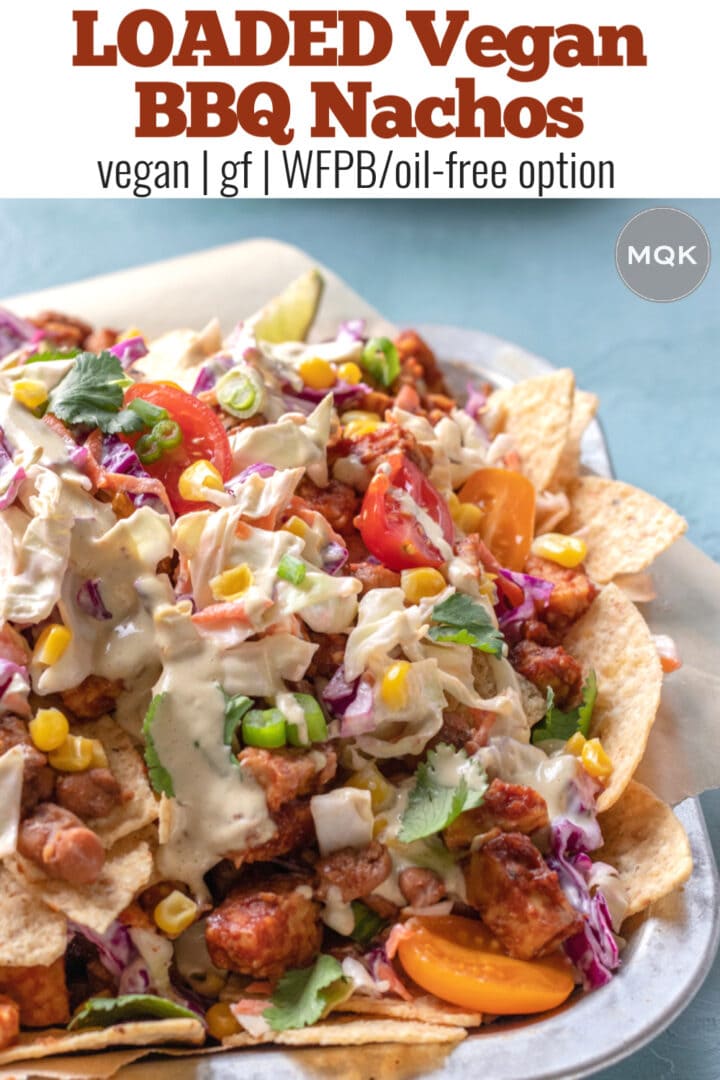 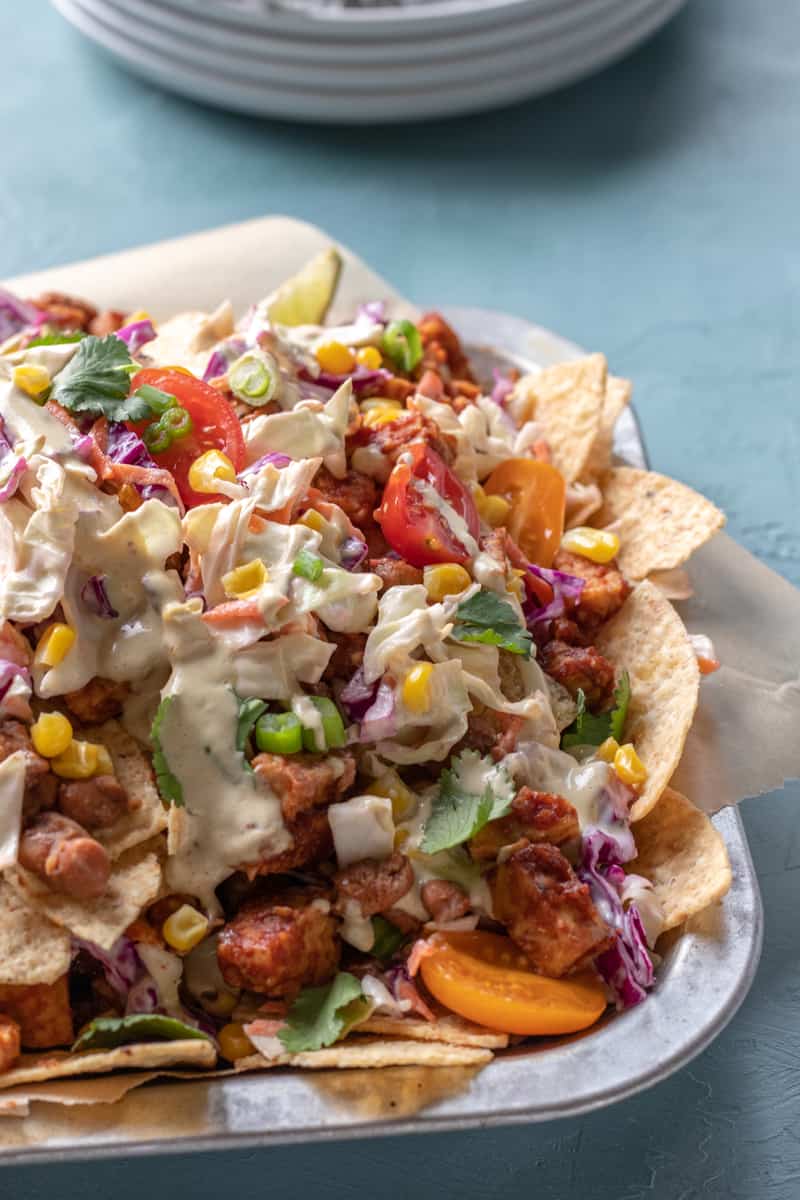 I'll take a  a giant plate of these loaded vegan nachos any day of the week! Crispy tortilla chips, sweet corn, barbecue tempeh, fresh and tangy coleslaw, smoky pinto beans, AND a creamy oil-free dressing?  Lord have mercy, y'all. Side note: I never knew how much I wanted to eat slaw on nachos.

And as far as nachos go, this is pretty much as healthy as it gets, which I think makes them even better! 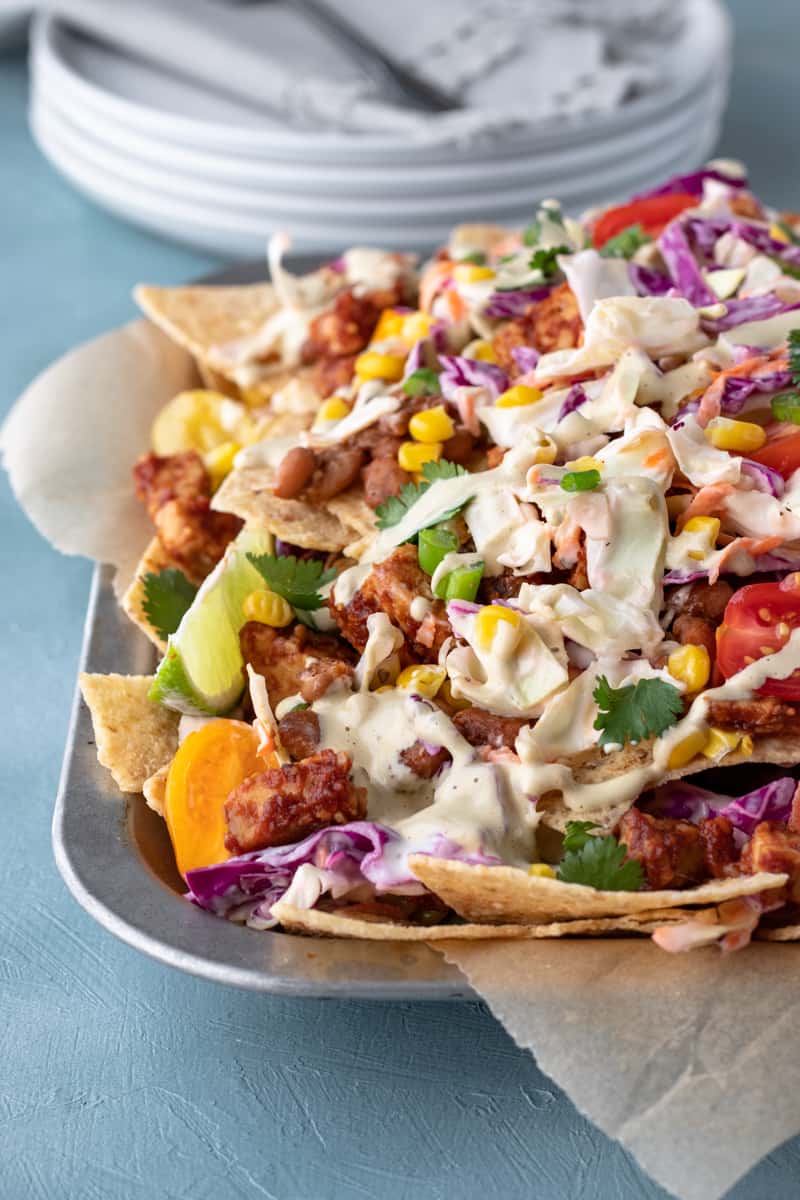 If you follow a whole-food, plant-based diet and want to enjoy some epic nacho fun, here's what you'll need:

Feel free to adjust the sodium in the BBQ sauce and the dressing to suit your needs. 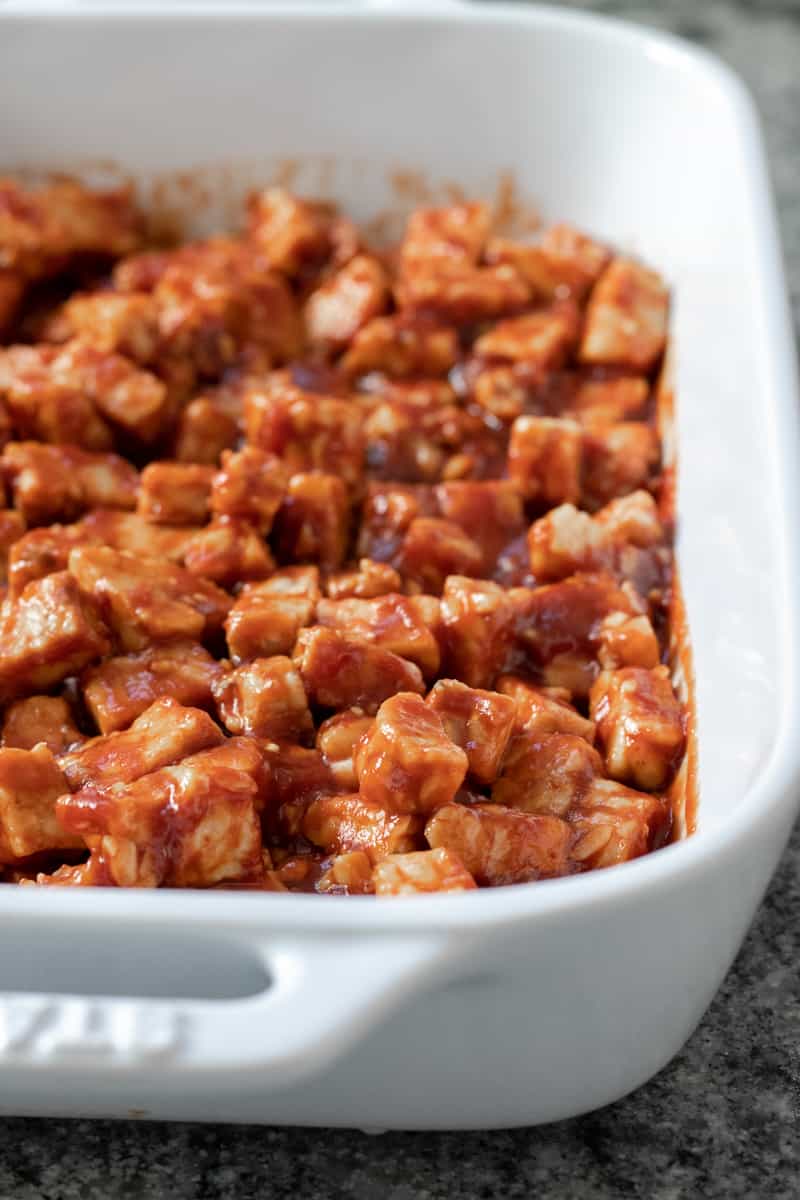 There are several components to these nachos, but they're all very easy. The BBQ tempeh takes about 30 minutes start to finish, so I like to make that first. Simply chop the tempeh into cubes, coat it in BBQ sauce, and bake in a 375 degree oven. While the tempeh bakes you'll blend the dressing and make the ranchero beans and coleslaw.

The quick ranchero beans are nothing more than canned pinto beans seasoned with a bit of BBQ sauce, chili powder, and cumin. Heat them on the stove, and you're all set.

To make the slaw, I used about ¼ of a small head of both green and red cabbage plus one carrot. If you want to simplify prep, you can always use a store-bought coleslaw blend. You'll want about 8 ounces or 4 cups of slaw mix.

Though I don't usually keep mayonnaise in the house (we're not mayo people, so it usually goes to waste), I wanted to buy some just for this recipe. I went with soy-free Vegenaise by Follow Your Heart. To ¼ cup of mayo I added a splash of lemon juice, about a teaspoon of agave syrup, a tiny pinch of celery seed, and a pinch of salt. You can also add black pepper if you like. And that's all you need for coleslaw! As I mentioned above, you can also use the Cashew-Lime Dressing on the slaw, if preferred.

UPDATE: try this Oil-Free Aquafaba Mayo instead of store-bought. It's so creamy and delicious. 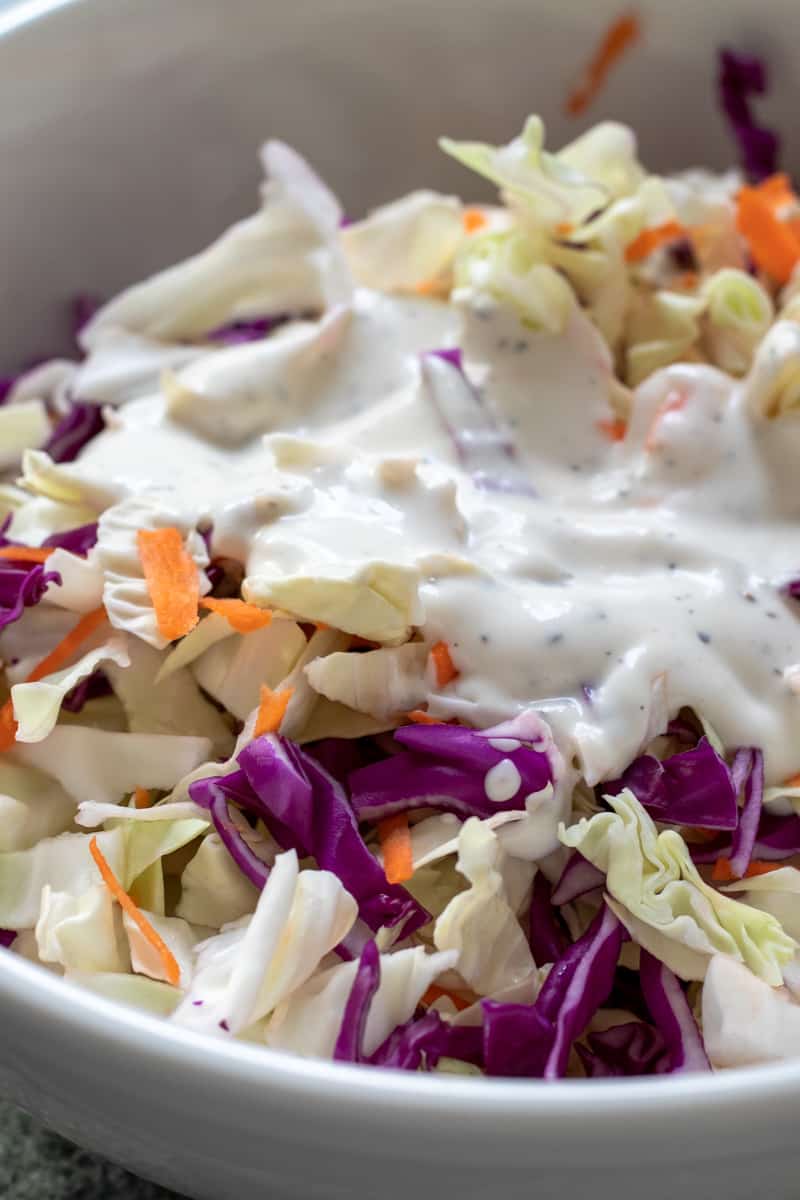 I originally shared the Cashew-Lime Dressing as part of this taco recipe and figured it would pair perfectly with these nachos. If you have a high-speed blender like a Vitamix, the dressing comes together in about 3 minutes flat. So fast!

If using a standard blender to make the dressing, you'll want to give the cashews a one-hour soak in hot water to soften them. Then, drain the cashews, rinse in cold water, and blend all the ingredients until creamy.

This is a dressing that tastes great even on days 2 and 3, so don't worry if you have some leftover. 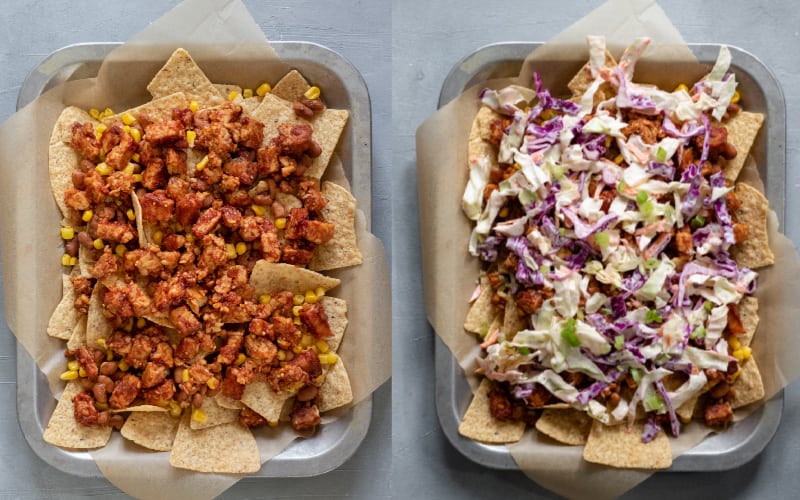 We're only talking about nachos, I know. Maybe I'm taking things too seriously, but I actually have a preferred order for assembling this dish. Here's how it goes:

A pair of large serving spoons is a great way to serve these nachos to a crowd. Of course, if you're making a smaller portion of nachos to enjoy at home, feel free to dig in with your hands! 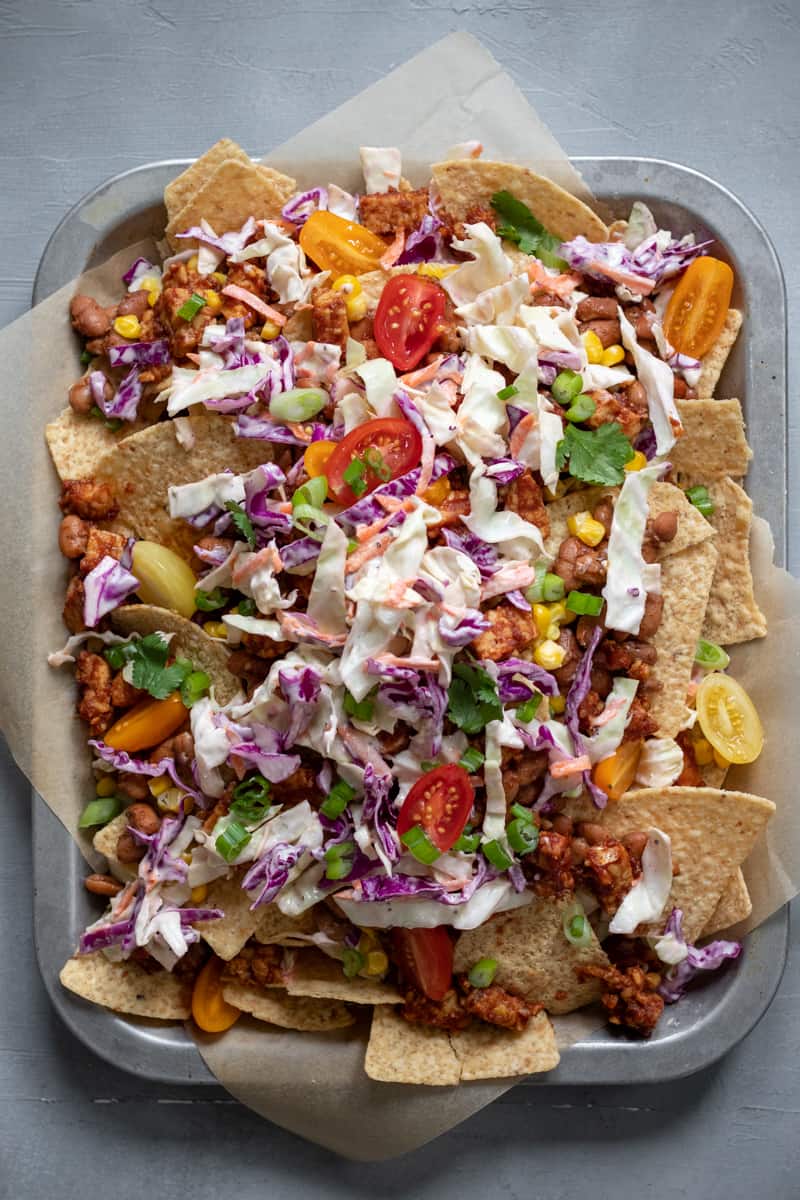 I hope you love these Loaded Vegan BBQ Nachos as much as we do! They're...

If you try the recipe I would love to hear from you! Leave a comment and star rating below, or tag me on instagram with @myquietkitchen. 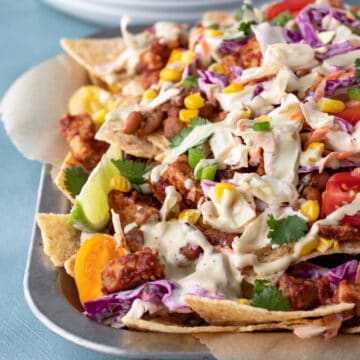 Author: Lori Rasmussen, My Quiet Kitchen
Piled high with deliciousness! Easy baked BBQ tempeh, corn, coleslaw, ranchero beans, and a tangy cashew-lime dressing make for some epic (and surprisingly healthy) vegan nachos! Gluten-free; oil-free option.Yield: This makes a huge platter of nachos perfect for a party. If serving only a few people, you may want to cut the ingredients in half. Another option is to prepare the full recipe, and store the leftover slaw, tempeh, beans, and dressing separately to enjoy as leftovers (no one wants soggy chips the next day).
Servings: 10 servings
5 from 3 votes
Print Recipe Pin Recipe
Prep Time: 30 mins
Cook Time: 25 mins
Total Time: 55 mins

For the BBQ Tempeh:

For the Cashew Lime Dressing:

For the Ranchero Beans:

To make this recipe WFPB/oil-free compatible: Storage: These nachos hold up fairly well for a party because they're not drenched in cheese sauce. Even still, moisture from the beans, slaw, and tempeh will soften the chips over time. So only assemble as many nachos as you plan to eat/serve the same day.  Leftover tempeh, slaw, beans, and dressing can be stored separately in airtight containers in the refrigerator for up to 4 days.