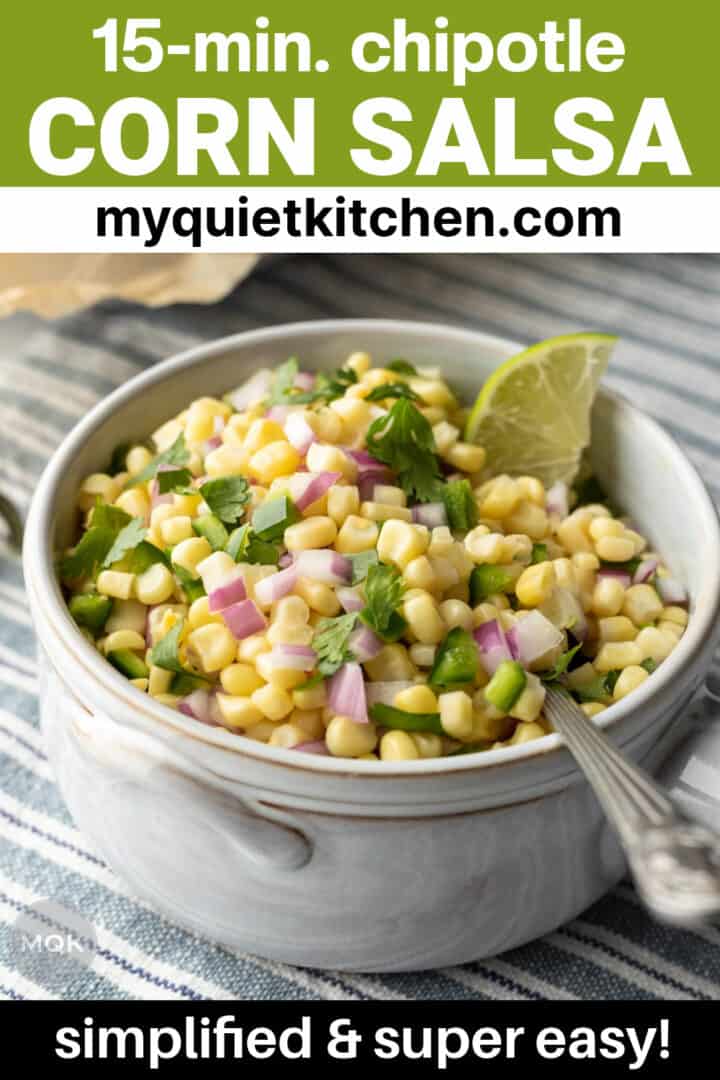 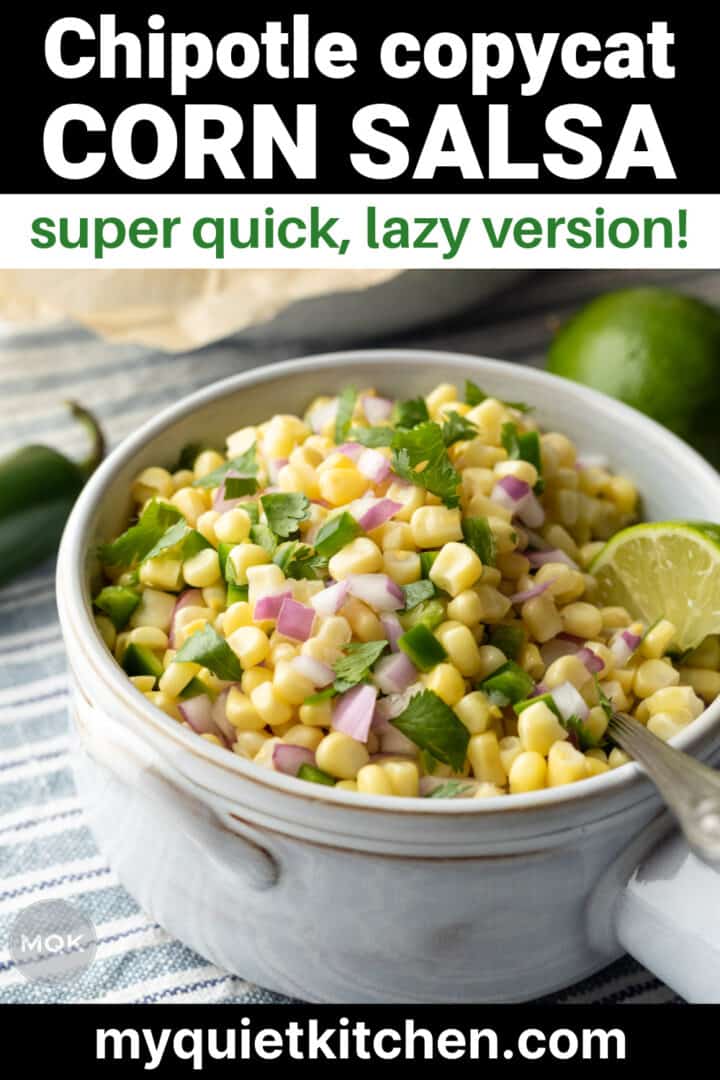 The roasted chili corn salsa at Chipotle Mexican Grill is super popular for good reason! It's mild, lightly sweet, and bursting with freshness from cilantro, jalapeno, and lime. The recipe I'm sharing today is a shortcut version of the corn salsa found on Chipotle's menu. It's ridiculously quick and easy and tastes just like the real deal! Ready in 15 minutes.

Everyone loves Chipotle, right? Personally, since we're vegan, the fast casual restaurant holds an extra special place in our hearts!

Chipotle is the chain that's always been there for us. They aren't just now hopping on the vegan train because it's trendy. They've been vegan-friendly from the beginning.

Passing through a strange city on a road trip? No problem! There's bound to be at least one Chipotle location easily accessed from the interstate.

I've mentioned before that I have major love for corn and everything made from it, and Chipotle's roasted chili corn salsa is no exception. When I realized how simple their recipe is, I started making it at home. I like to scoop it up with tortilla chips for a little corn-on-corn action.

How is this different from Chipotle's corn salsa?

I'm always looking for ways to streamline recipes. So I skipped the step of roasting a poblano pepper, and you know what? We didn't even miss it.

In fact, if you watch Chipotle's TikTok video where they revealed how they make the roasted chili-corn salsa, you'll notice that poblano isn't mentioned.

But if you look closely at the bowl of corn in the video you will see a few dark green morsels that can only be poblano pepper.

So my takeaway is that yes, their recipe "officially" contains roasted poblano pepper, but not very much (probably due to cost).

This is why we can skip that step at home and still have corn salsa that tastes like the original!

You only need 5 ingredients to make this light, fresh, sweet corn salsa. Once you see how quick it is, I think you'll want to make it every week like I do!

See recipe card below for quantities and full instructions.

How to Make Chipotle Corn Salsa

For food safety it's a good idea to cook frozen corn. But don't worry, it literally only takes a few minutes! Check it out:

Hint: the flavors mingle and improve after an hour or so in the fridge.

This is a great recipe to prep in advance for a potluck or backyard cookout. Double or triple the recipe if serving a crowd!

What to Serve With Corn Salsa

Just like at Chipotle Mexican Grill, you can add this corn salsa to all of your favorite Mexican and Tex-Mex dishes like:

Scoop it up with tortilla chips, or add it to a big pile of loaded nachos.

Corn salsa is a perfect topping for your favorite vegan chili. Serve it alongside this 1-Skillet White Chili Casserole for extra zip and freshness.

How long does corn salsa keep?

This is a great recipe to make ahead because the veggies hold up well and the flavors just get better and better. Store corn salsa in the refrigerator in an airtight container for up to 5 days.

How spicy is corn salsa?

It leans more toward sweet and mild thanks to the corn. However, the spice level of jalapenos can vary, so keep that in mind. To make extra sure the salsa is mild, roast the jalapenos first or omit them and use a roasted poblano pepper.

Can I use fresh corn instead of frozen?

Absolutely. To cook corn on the cob, remove the husks and silks, and place 4 or 5 ears of corn in a large pot. Cover with water, bring to a boil, and cook for 1 to 2 minutes or until the corn is tender. Cool, then cut the corn from the cob. Or grill the corn for even more flavor! 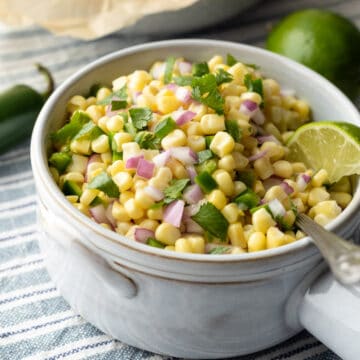 Instructions for fresh corn: To cook corn on the cob, remove the husks and silks, and place 4 or 5 ears of corn in a large pot. Cover with water, bring to a boil, and cook for 1 to 2 minutes or until the corn is tender. Cool, then cut the corn from the cob. Grill the corn instead for more flavor! Storage Store corn salsa in the refrigerator in an airtight container for up to 5 days.