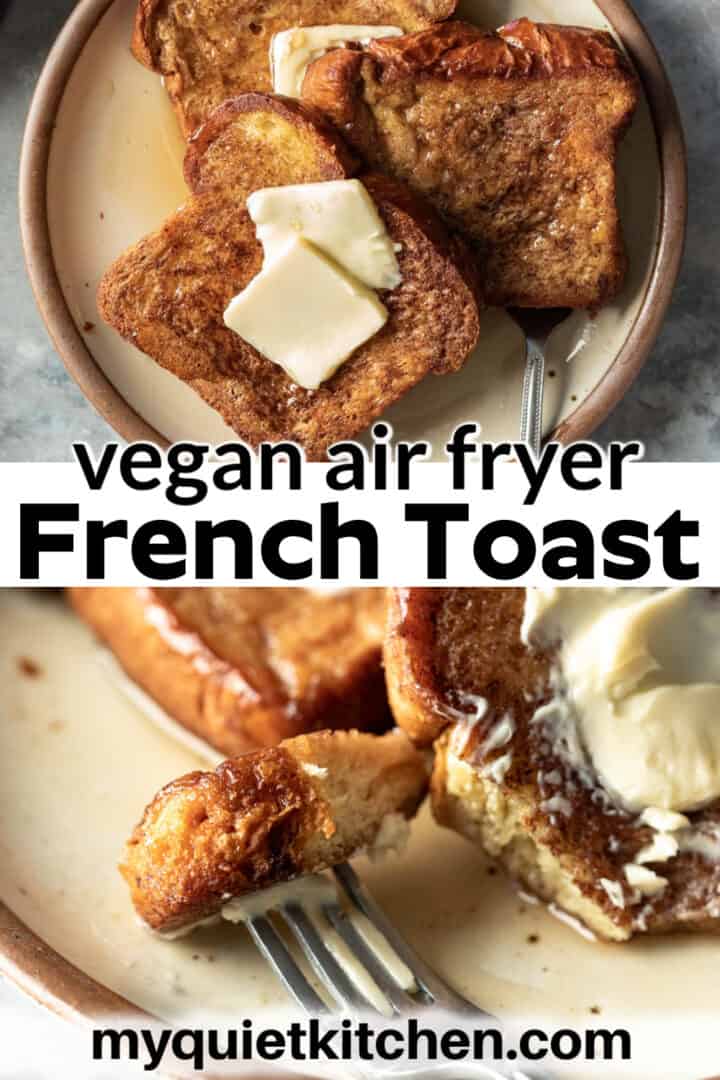 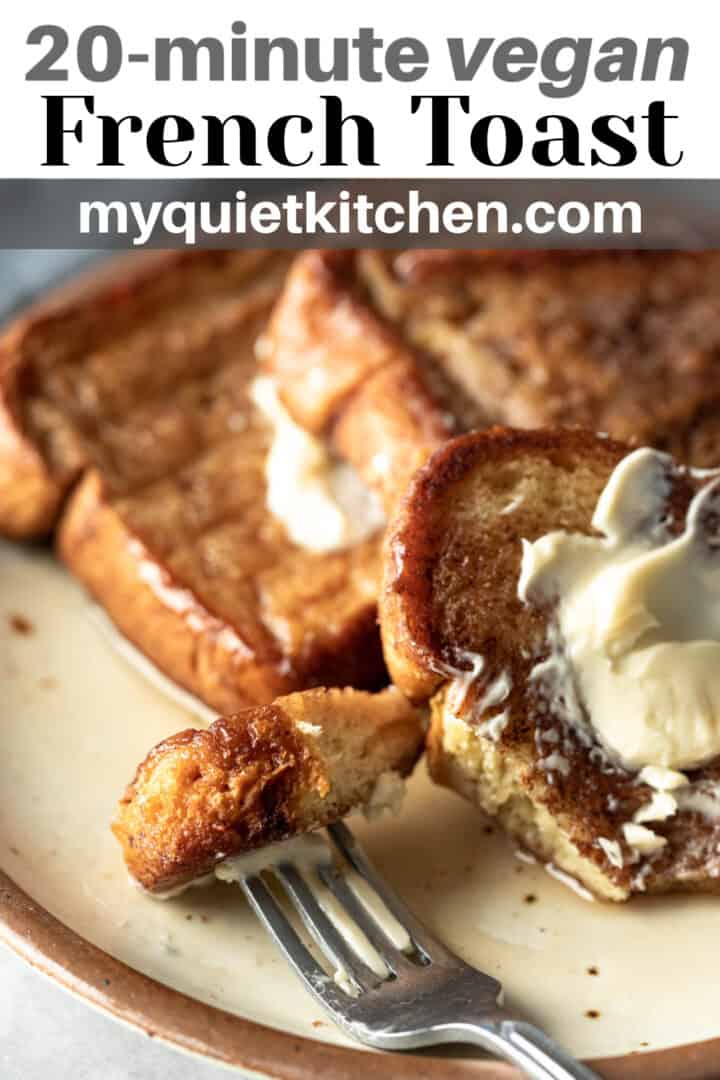 Vegan Air Fryer French Toast has won our hearts! It's the perfect breakfast or brunch treat to whip up in a flash. You'll love how quickly it comes together and that it's healthier than traditional French toast. Plus, the flavors and textures are perfect! Only 7 ingredients and 20 minutes to prepare, and trust me, no one will ever miss the eggs. No air fryer? That's okay! Stovetop instructions included.

No exaggeration, this recipe is single-handedly turning me into a French toast person.

Ever since spotting the vegan brioche loaf at Trader Joe's I've wanted to create a vegan French toast recipe for the blog. But honestly, we're not big bread eaters in our house. So I dragged my feet a bit.

But holy moly, y'all. This is the most delicious French toast I've ever tasted! I'm not kidding. Yet the batter is ridiculously simple.

We were seriously surprised how perfect it was straight out of the air fryer. The exterior is crusty and golden, great for sopping up maple syrup.

And the inside of the thick slices of bread are creamy and light, exactly how French toast should be. All without eggs or dairy!

I think you'll love this vegan French toast, too, because it's:

See recipe card below for quantities and the full recipe.

How to Make French Toast in the Air Fryer

Tip! I'll probably mention this again below because, well, it's just that important.

Air fryers vary across brands and models. So the first time you prepare the recipe it's a good idea to babysit it a bit, especially before the halfway point and during the last few minutes of the suggested cook time.

Just in case your air fryer runs hotter than mine (I use this Instant Pot Vortex), you'll be able to catch the French toast before it burns. Or if yours cooks more slowly, you can increase the cook time.

If you don't have an air fryer that's no problem! French toast also cooks quickly on the stove. So the French toast isn't too crowded in the pan you'll need to work in two batches.

Or if you have a large electric griddle you can cook all 5 or 6 slices at the same time - even easier!

Here's a fun variation - make vegan French toast sticks in the air fryer! To do it:

Vegan French toast is best served warm, with vegan butter and plenty of maple syrup on the side.

A dash of cinnamon or dollop of non-dairy whipped cream are also delicious.

For dessert, you can't go wrong with a scoop of vanilla oat milk ice cream on top!

I use the 6-Quart Instant Vortex Air Fryer, but any comparable air fryer will work with this recipe. It holds 4 slices of vegan brioche at a time.

You'll also need a large shallow bowl or glass storage container for mixing up the batter and soaking the bread.

Should I use dry or stale bread for French toast?

No, unlike dishes like stuffing, where intentionally drying out the bread is ideal, French toast works best with somewhat fresh bread. It shouldn't be overly moist, but it also doesn't need to be dry. I used pre-sliced vegan brioche straight from the package. If using a high-moisture bread it wouldn't hurt to let it sit out for an hour first.

How should I store leftover French toast?

French toast is best enjoyed immediately, but if you do have leftovers, let it cool completely then place in a storage container. Refrigerate for up to 4 days, and reheat in a skillet, on a baking sheet in the oven, or in the air fryer.

Can I freeze French toast?

Yes, once it has cooled completely, place the slices in a single layer on a large baking sheet. Place in the freezer for about 30 minutes, then transfer to a freezer-safe storage bag or container. Keep the French toast frozen until ready to re-heat and serve.

As mentioned above, air fryers can vary quite a bit across different brands and models. So the first time you prepare any air fryer recipe it's a good idea to babysit it a bit.

For French toast it's good to check it just before halfway point and during the last few minutes of the suggested cook time.

I suspect that our air fryer runs hot compared to most. So you may find you need to adjust the cook time.

I hope you enjoy this delicious and easy Vegan Air Fryer French Toast as much as we do! If you try the recipe comment below to share your feedback. 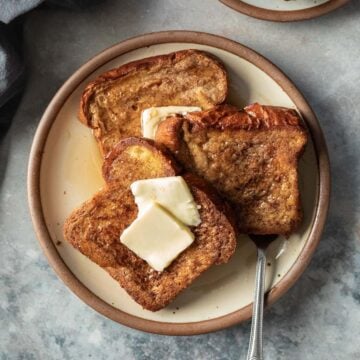 See the sections above for tips, substitutions, and a variation for French toast sticks. Store - French toast is best served fresh. Leftovers can be stored in the refrigerator for up to 4 days or frozen for up to 2 months. Reheat in the air fryer, oven, or in a skillet on the stove.