Dairy-free spiced pudding with rum-soaked raisins and candied pecans. You on board?

I haven't made a dessert in a while, and with fall officially here I am so in the mood! It may not be obvious yet, with the blog still being fairly new, but I love baking and making desserts. From my first successful cheesecake years ago, I've loved baking. Desserts are special, beautiful, and often a wonderful creative outlet. Not to mention, they usually accompany festive, happy occasions!

Truth be told, I think this is my first foray into rum raisin anything. It's not a flavor I've ever been super into, you know? But thanks to this pudding I just may be rum raisin's newest convert!

I'm usually more of a vanilla/chocolate/caramel/nuts sort of person, while my husband is the fruity-dessert lover. But when you think about it, rum raisin really is in a class by itself. Boozy, warm, and often accompanied by spices like cinnamon and nutmeg. In other words, it's a very different experience than, say, stone fruit or berry desserts, which are often tart.

And with the addition of candied pecans, this recipe is starting to sound more and more like my jam!

In my pre-vegan days, I used to make spiced nuts every year around the holidays. That old recipe called for an egg white for some silly reason. I now know the egg white was totally unnecessary and that making these vegan candied and spiced pecans couldn't be easier, as you'll see below.

The recipe makes more than you'll need for topping the four servings of pudding, but I don't think that's much of a problem. Heck, you should probably just bump it up to two full cups of pecans, and enjoy the bounty.

For the pudding, I used a combination of unsweetened soy and almond milks because that's what I had, but you can use any type you like. If you really want a creamy and decadent pudding, opt for full-fat, canned coconut milk. Soy and almond produce a creamy, almost custard-like pudding, somewhat similar to flan, which I really enjoy.

I find it WAY too much fun to create creamy, thick, rich, dense, custardy vegan desserts, since many people still think dairy and eggs are the only ways to achieve such textures.

With coconut, nuts, starches, sea vegetables, and fruits, we have our ways! For vegan pudding, cornstarch is the most common thickener, but arrowroot starch is also an option (though I haven't tested it in this particular recipe). I generally try to keep the ingredients in my recipes as common and approachable as possible. Certainly for this recipe, any grocery store will have what you need.

If you try this easy Vegan Rum Raisin Pudding I would love to hear about it! Leave a comment here or tag @myquietkitchen on instagram. 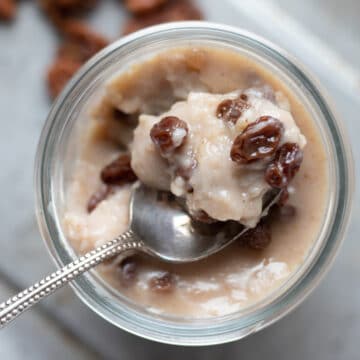 If you're not into rum or raisins, feel free to omit them. The spiced pudding is delicious on its own. You will have extra candied pecans (hooray)! Nutrition for the pudding was calculated using ¼ of the full batch of pecans (or 1/16 per person). Store pudding in the refrigerator for up to 4 days.