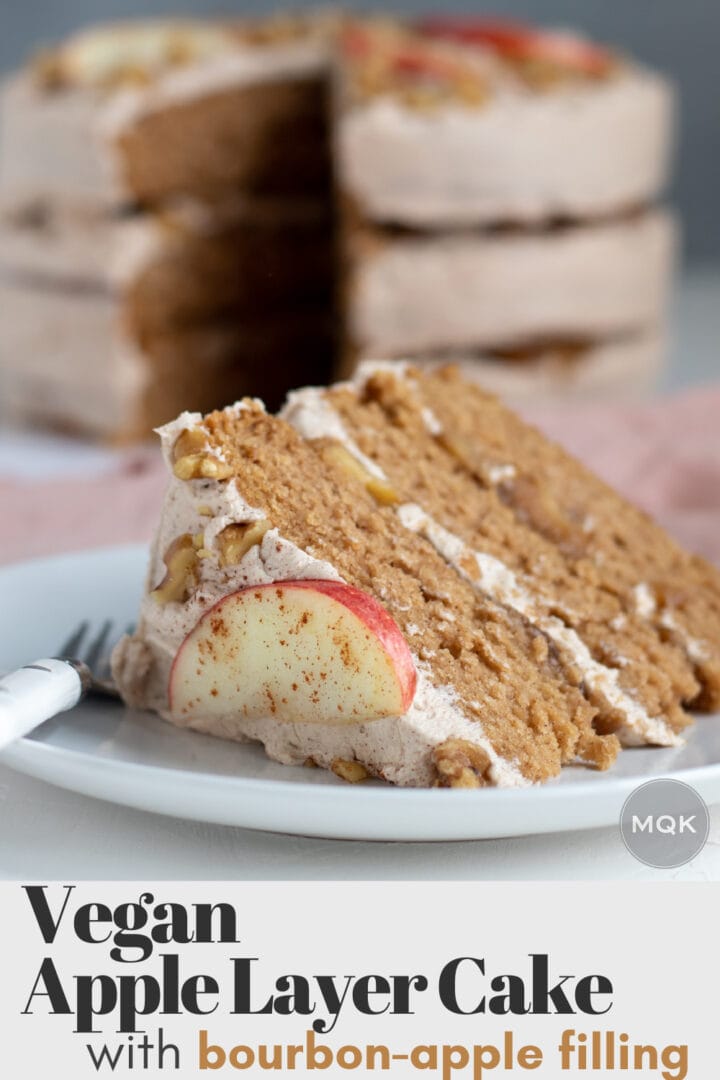 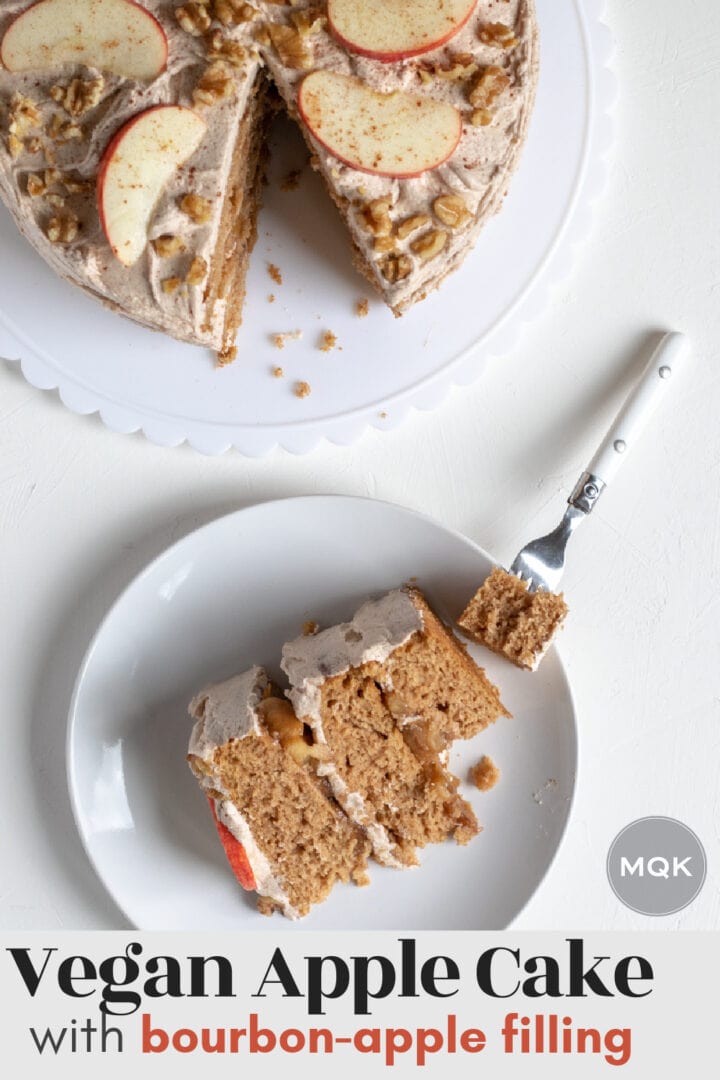 This beautiful Vegan Apple Cake is perfect for Thanksgiving and fall celebrations! It features fragrant, spice cake layered with bourbon-apple compote and a simple vegan cinnamon frosting. This tried and true vegan cake recipe is always a hit!

Hey Friends, guess what...  it's CAKE time! Here's a little warning for all you healthy eaters out there. You might want to look away, because what we have here is quite possibly the most decadent recipe that will ever grace this site.

We're making a 3-layer vegan apple cake with cinnamon frosting, and let me tell you... it is amazing!

I share a lot of nutritious plant-based recipes on the blog, but I also just flat out love cake. And I LOVE showing people that being vegan doesn't mean giving up any of their favorite recipes, including amazing desserts!

With the blog being new this fall (2018), when apple season hit so did the inspiration! However, after my first two tests of this recipe I got sidetracked with more reasonable things, healthier recipes, budget lunch ideas, Thanksgiving dishes, etc.

I shared a photo of this cake on instagram in celebration of World Vegan Day, and though I intended to post it before Thanksgiving, after a little more time passed (and apple season was passing me by) I realized I probably wouldn't get around to it. Not because I didn't like this cake, but because I just didn't know whether this seasonal, super decadent cake was something you'd be into.

Then, I got some really great feedback from my taste testers. When I made the 3-layer version, my husband took most of it to work the next day to share with co-workers.

Everyone enjoyed it so much they started commenting about it on instagram, sending me messages, and apparently even talking about it to their friends.

I continued to hear second-hand from Mark how much they liked it. But it wasn't until someone reached out and said, "Hey, I heard this cake is amazing. Do you have a recipe because I want to make it for Thanksgiving!" that I knew I needed to get off my lazy behind and type it up. So, here we go!

Here's a quick look at the ingredients you'll need. See the recipe card below for amounts and full instructions.

For the apple compote:

And for the frosting:

How to Make Vegan Apple Cake

The cake layers are easy to make and delicious all by themselves. Prep is as easy as sifting and whisking together the dry ingredients, mixing the wet ingredients, combining the two, and dividing among three prepared 9-inch cake pans.

If you're intimidated by cakes, please don't be! Just follow the instructions step-by-step. Also, check out my Top 12 Vegan Baking Tips before getting started.

The filling/compote comes together easily in a saucepan by simmering the apples with a bit of brown sugar and maple syrup and thickening it with a corn starch-bourbon slurry. Not into bourbon? Replace it with water.

The frosting is super easy, too. It's a typical vegan buttercream with a bit of cinnamon added. You'll need a handheld or stand mixer.

Not only does the cinnamon taste and smell lovely, but it gives the frosting a warm and slightly pinkish hue. If you can find Ceylon or above average-quality Cassia cinnamon, it's worth it here.

Once you've made the three components and allowed the cakes and apple compote to cool, you're ready to assemble and decorate the cake!

As I mentioned, the cake is sweet and delicious all by itself, so if you're baking for a smaller group or just don't want to mess with layers and frosting, simply divide the ingredients by 3 to make a single layer.

You can dress it up by thinly slicing an apple and placing the apple slices in the bottom of the cake pan in a decorative, circular pattern (see below). Then, pour the batter over the apple slices.

When you flip the cake out of the pan you'll have the effect of an upside-down apple cake, which looks lovely even without frosting! But if you're feeling fancy go ahead and dust it with powdered sugar and sprinkle of chopped walnuts.

Can I make the cake a day in advance?

The individual components may be prepared the day before, but it's best to assemble and decorate the cake the same day you plan to serve it.

Does this recipe work with gluten-free flour?

I haven't tested it yet with a gluten-free baking blend, but I do think it would work well. Let us know in the comments if you give it a try!

What type of apple is best for apple cake?

Any sweet variety of apple you can find at the grocery store is great, such as gala, fuji, or honeycrisp.

Store leftover cake in an airtight container in the refrigerator for up to 4 days. As with all cakes, once sliced the cake will begin to dry out. Leftovers can also be frozen.

Though this cake was inspired by fall, you can obviously enjoy it any time of year.

Make it for a birthday party, a holiday meal, your friend who loves apples, or just because you feel like making swirly designs with frosting (always fun).

And let's make a pact. Let's plan to bring this cake back in the spring and summer with different fruits and spices. You on board? Bourbon Peach? Strawberry Basil? Lemon Blueberry? Raspberry Mint? I'm game!

If you make this amazing vegan apple cake I would LOVE to see a photo. Tag @myquietkitchen on instagram and show us your cakes! And be sure to comment below to let us know! 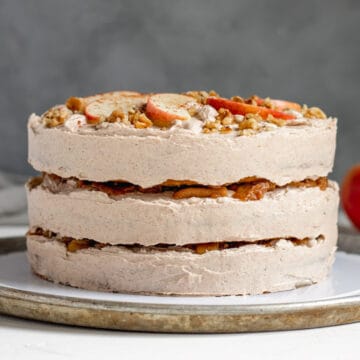 Store leftover cake in an airtight container in the refrigerator for up to 4 days. As with all cakes, once it is sliced the cake will begin to dry out. The three components may be prepared the day before, but it's best to assemble the cake the day you plan to serve it. Let the frosting and compote warm at room temperature for a few minutes so they're easier to spread.