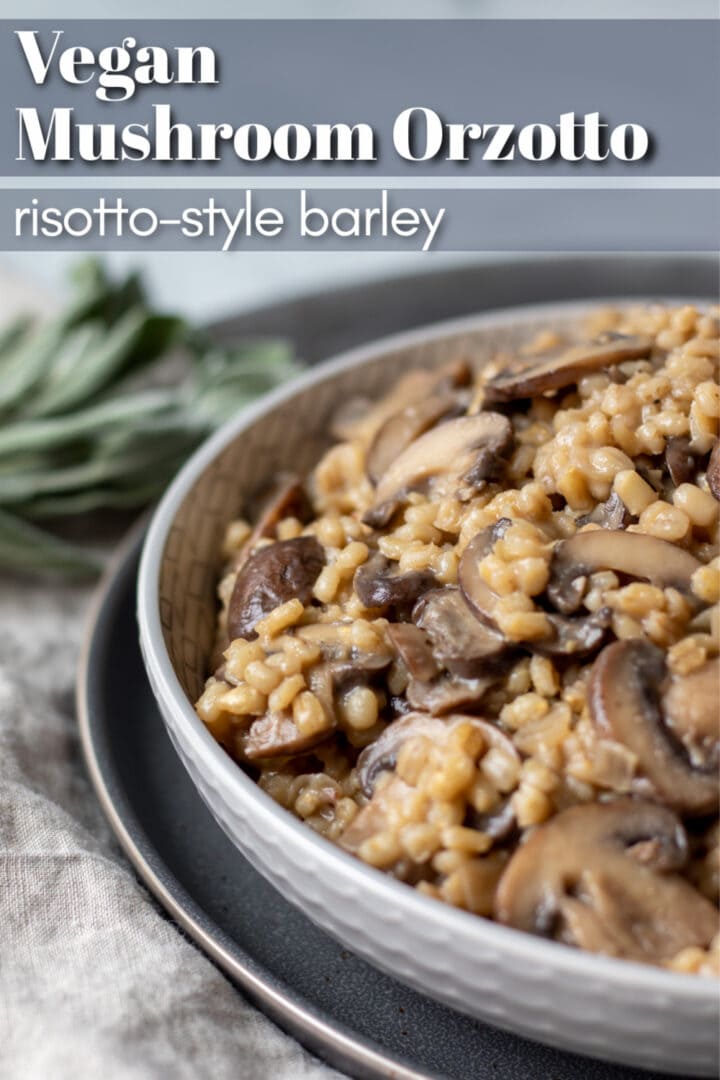 Mushroom-Sage Orzotto is a risotto-style dish made with pearled barley, onion, mushrooms, and sage. Creamy, savory, and comforting, orzotto makes a beautiful side dish for the holidays but is easy enough for everyday.

This recipe was originally published in November 2018 and has been updated for content.

Raise your hand if you've heard of orzotto. "Or huh?" Haha right?! Until stumbling upon this cooking method a couple of years ago I'd never heard of it.

In short, orzotto is an Italian dish similar to risotto but made with pearled barley instead of rice. It's creamy, savory, and full of possibilities.

Pearled barley, sometimes called pearl, is barley that has been polished to remove the bran layers. It is less nutritious than hulled barley but is softer and takes less time to cook. And because the bran has been removed, the starches create a luscious, creamy texture similar to risotto.

How To Make Mushroom Orzotto

Here's a summary to get you started. See the recipe below for complete instructions.

Begin by rinsing and draining the pearled barley.

Next, sauté onion in a large sauté pan or stock pot. Add sliced mushrooms, and cook until the moisture has evaporated. Add a pinch of salt and the garlic, and cook for 1 minute.

Add the barley to the pan, and give everything a good stir.

Add vegetable broth and sage, and bring the mixture to a boil. Cover, reduce heat to low, and simmer until most of the broth has been absorbed, about 30 minutes.

Stir the orzotto to release even more of the starch. Continue to cook uncovered, stirring occasionally, until most of the broth has evaporated. Stir in the non-dairy milk (any unsweetened variety is fine), and vegan butter, and remove from heat.

Season with black pepper, top with vegan parmesan cheese, if desired, and serve.

Mark and I ate almost the entire four-serving batch the first time I tested this dish, and I knew I had to make it again to share with you! I doubled everything for the final recipe, and, as written, it serves 6 to 8 people as a side dish.

If you're not particularly into sage or can't find fresh sage when the mood for orzotto strikes, don't let that stop you! The umami-rich mushrooms, sweet onions, and fragrant garlic + butter pretty much have delicious on lockdown. The sage does make it extra special, though, and boy oh boy does the house smell amazing while this cooks!

Craving something green? Add fresh spinach or chopped kale during the final few minutes of cooking.

Turn orzotto into a full meal with cooked garbanzo or cannellini beans.

And flavor-wise, if you're not in the mood for sage, rosemary works well here, too. Another flavor option to try, especially in spring and summer, is lemon zest and/or basil. But wait until you turn off the heat to add basil or lemon, as they're more delicate.

Just a quick tip... Start looking for fresh sage several weeks before Thanksgiving because it tends to sell out! As a bonus, sage stays fresh in the refrigerator for up to a month.

I hope you enjoy this Mushroom-Sage Orzotto as much as we do! If you try it be sure to leave a comment below to let us know how it turned out. 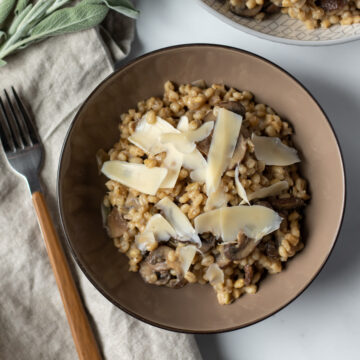 Author: Lori Rasmussen, My Quiet Kitchen
This recipe serves 6 to 8 as a side dish and can easily be scaled up or down. With mushrooms, onion, garlic, sage, and dairy-free butter, this simple recipe for orzotto is the best kind of vegan comfort food!
Servings: 8 servings
5 from 4 votes
Print Recipe Pin Recipe
Prep Time: 10 mins
Cook Time: 45 mins
Total Time: 55 mins

Store leftover orzotto in an airtight container in the refrigerator for up to 5 days.