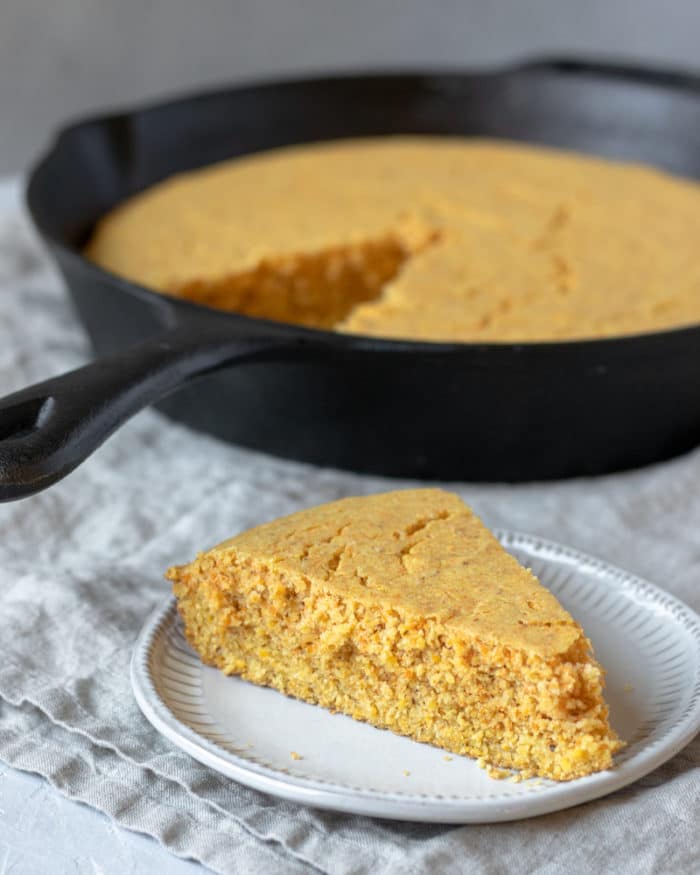 If you saw my last post, you heard me talk about not really having strong feelings about cranberries. Well, here come the feelings! Haha, just kidding. Sort of. I mean, we're definitely moving into more opinionated territory, but apparently I'm not alone in having a strong preference for a certain style of cornbread.

I've come to learn that cornbread is very regional, so it's to be expected that someone who grew up in the Midwest, West, or North isn't going to like the same cornbread as someone from the South. One glance at the comments sections of many recipes online illustrates this perfectly. One comment will read, "Yuck, all I tasted was salt and butter. I had to drench mine in syrup to make it edible!" while the next proclaims, "This was the best cornbread I've ever had!"

You get the picture. So I started to realize, perhaps it's all just one big misunderstanding and what we need is for more people to realize that "cornbread" means significantly different things to different people. Sure chefs, professional cooks, food writers, and the like know about the regional differences, but your average person who has always lived in the same part of the country may not realize exactly how much variation there is among cornbread recipes. Once we know which style we prefer, searching for our new favorite cornbread recipe will become much more successful!

Even within regional styles you find varying ratios of cornmeal to flour, different amounts and types of sugar, and different fats.

Today I'm sharing a recipe for the type of cornbread I really love. Reminiscent of the version my mom has always made, which is the stone-ground, so-called savory, yellow cornmeal variety referred to as southern-style. (If you're interested in learning more about the different types of cornbread, this brief summary will get you started.) 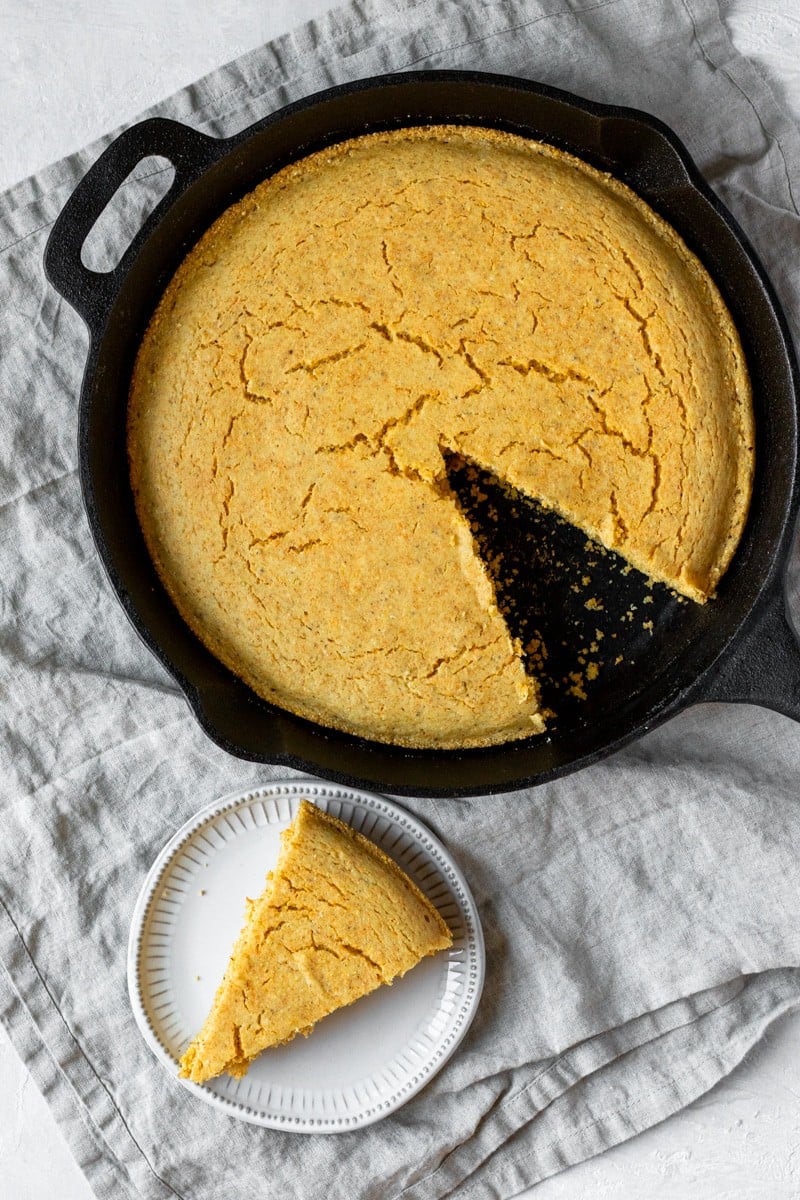 Now that I've stated my love for southern-style cornbread, I'm going to stray from it completely by making it vegan! Good ol' southern cornbread usually contains lard, eggs, buttermilk, and/or dairy butter. But the fact that cornmeal is the real star is exactly why it's so easy to make a perfectly delicious and satisfying vegan version. 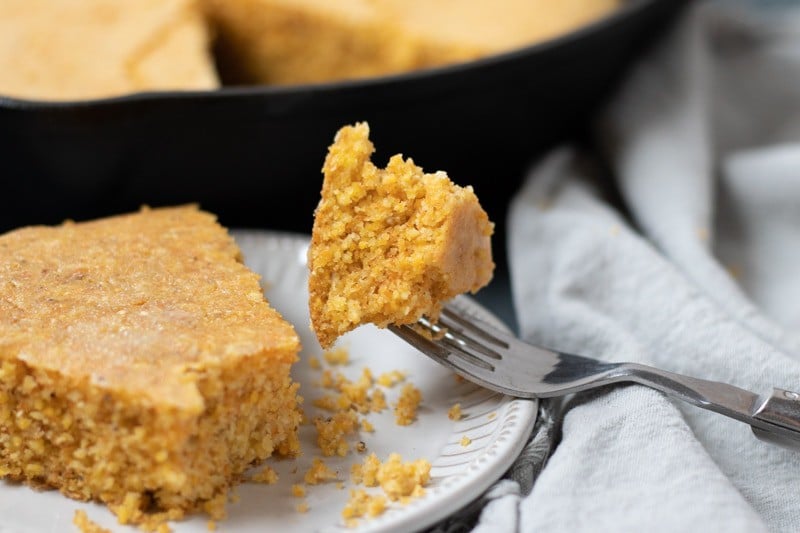 How to scale the cornbread recipe for different pans

In case homemade cornbread is new to you, you'll be happy to know it's ridiculously easy to make. You need just one bowl, a mug for melting the vegan butter, and a large cast iron skillet. On that note, let's talk about scalability for a moment. In testing this recipe I found that cooking it in a pre-heated 12-inch cast iron skillet is my favorite method. However, I realize you may want to use a standard 8x8 baking pan or a different size skillet, and I don't want to leave you hanging with no guidance on how to do that!

You can find many great explanations about scaling recipes online, so I won't bore you with too much math. But it is helpful to understand how it's done, so just bare with me for a moment. Essentially, all we need to do is compare the surface area of the pans, adjust the ingredient amounts by the percentage of difference, and then keep an eye on the doneness of the center of the cornbread during cooking in case there's a bit of variance.

*If you've seen my Chocolate Chia Tart post before, this formula will look familiar.*

To calculate surface area of a round pan:

For example, I calculated the area of my 12-inch skillet to be 113.

Let's say you want to use a 10-inch skillet:

That's close enough to 2. So for a 10-inch skillet you would use 2 cups of cornmeal instead of 3. Make sense?

Want to use a square pan?

There are times when you might need to know the volume of a baking dish instead of just the surface area, but since we're not altering the thickness of our cornbread we don't really need to worry about that here. 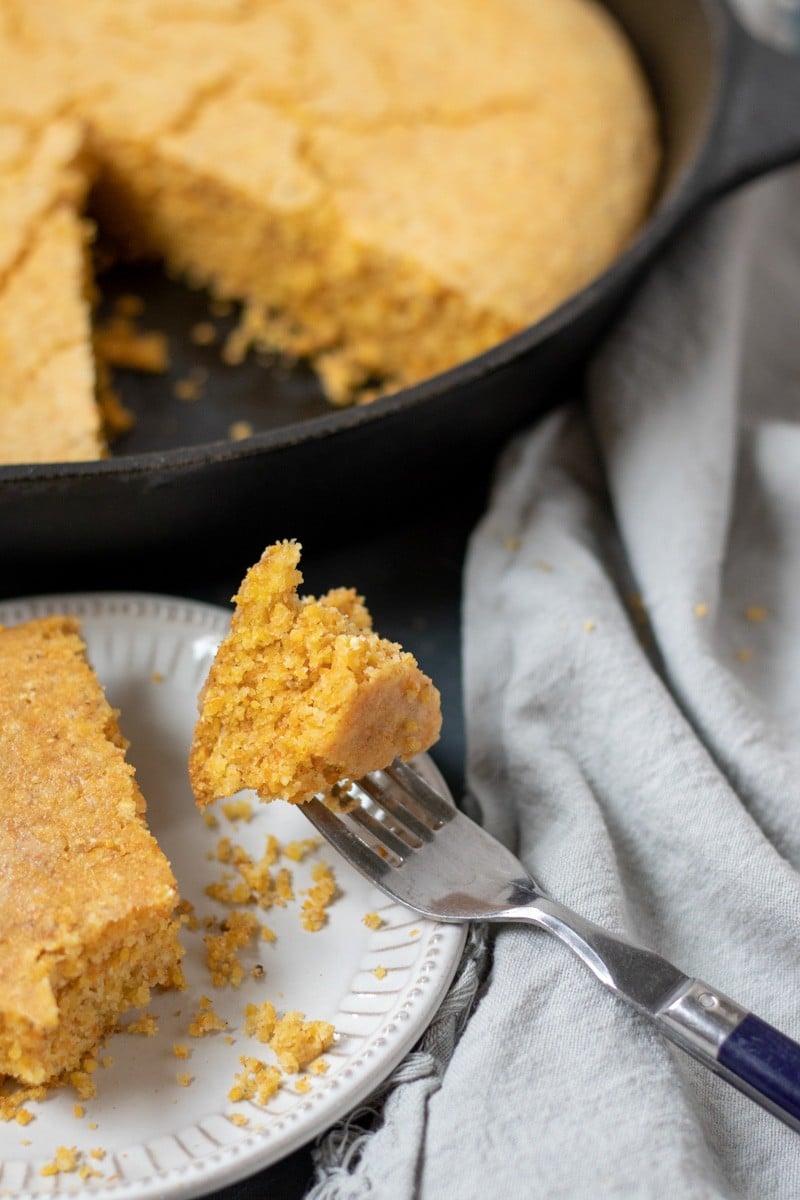 A few notes about cornbread ingredients:

Finally, let's get to the recipe, shall we?!

Or its predecessor... Vegan Chili For All 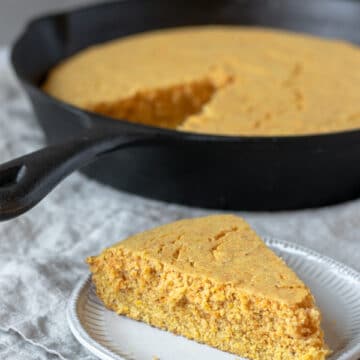 Author: Lori Rasmussen
Just 8 ingredients in this vegan version of a southern classic. Unlike its sweeter counterpart enjoyed in other parts of the country, this cornbread is slightly buttery and salty and celebrates the texture and flavor of stone ground corn. Delicious with beans and greens, soup, chili, or by itself with a pat of vegan butter.
4.81 from 21 votes
Print Recipe Pin Recipe
Prep Time 10 mins
Cook Time 20 mins
Total Time 30 mins
Course Side
Cuisine American
Servings 10 servings
Calories 250 kcal

To make this recipe in an 8x8 inch square pan, reduce ingredient amounts by half and do not preheat the pan. Baking time will still be about 20 minutes.

Have you tried the recipe?Comment below to let us know!