Buttery, sweet, and custard-like, this vegan corn pudding is a breeze to make and tastes so much like the classic egg- and dairy-filled version it's shocking. Just 7 ingredients and no special equipment required. Corn pudding is a perfect vegan side dish for Thanksgiving, Christmas, or anytime you're craving rich vegan comfort food.

While I often share healthier recipes, a few times a year I like to re-create decadent vegan versions of classics I grew up with. Anyone remember this epic Vegan Strawberry Pretzel Salad? Well, today's corn pudding is like that, except quite a bit easier!

What is corn pudding?

If you're not from the American South you might be wondering what exactly corn pudding is and how it's different from other casseroles. Usually corn pudding is creamy and made with lots of eggs, butter, and cream, which give it a custard-like texture. It has a buttery and salty + sweet flavor and goes well with so many different dishes.

Sometimes you'll see corn pudding recipes that are more bread-y, sort of like a soft and moist cornbread in a casserole dish. My family always enjoyed the creamy, custard-like version during the holiday season, so that's what I'm sharing today.

On that note, in the South since we usually have savory cornbread or cornbread dressing with our holiday meals, it wouldn't make sense for the corn pudding to also be bread-y. And since corn pudding is lightly sweetened it also explains why we tend to keep our cornbread savory.

In case you don’t already know this about me, I love all things corn, like cornbread, tortilla chips, polenta, and cornbread dressing. And years ago, before I went vegan, I enjoyed my Aunt Martha's corn pudding every year at Thanksgiving. Even though it's been a decade since I've tasted her recipe, I remember it so clearly. Creamy, salty, sweet, and so rich thanks to butter, cream, and eggs.

Making a vegan version has been on my holiday recipe to-do list since I started this blog. But honestly, as soon as I glanced at the screenshot Martha sent me of her recipe (pictured below), procrastination set in HARD. I mean, this wasn't going to be a straight-swap kind of situation, or so I thought.

My mistake was that I was trying to imagine how to recreate this intensely egg heavy dish with some concoction of silken tofu, coconut milk, and corn starch. But then, a few weeks ago it finally occurred to me... JUST Egg! I actually hadn't cooked with JUST Egg until the first test batch of this recipe, which explains why it didn't immediately come to mind. But also, I usually try to create recipes that use common, easy-to-find ingredients, so that no matter where in the world you are, you can make it, too.

And while I still intend to do that for those of you who don't have access to JUST Egg, I realized I should stop making this so difficult and just make the damn corn pudding. So I did. And it blew my mind.

I never say things like what I'm about to say, but I'm saying it now with total confidence. This corn pudding is legitimately undetectably vegan and tastes SO much like the original it's absurd. I'm not even kidding.

This easy corn pudding bakes in about 55 minutes, but only takes about 10 minutes to mix up. It’s delicious enough for holiday dinners, but easy enough for special occasion meals any day of the week!

You need only 7 ingredients plus salt to make vegan corn pudding. You'll also need a 9-inch square baking dish. This is just a summary, so be sure to scroll down for the full recipe and instructions.

Can you believe how simple that is? And again, I'm looking forward to creating a more "from scratch" version of this vegan corn pudding without JUST Egg. I'll add that version to this post as soon as I get it done. But since Thanksgiving is next week, I wanted to post this as quickly as possible in case you'd like to make it!

Step By Step How To Make It

Corn pudding is typically served warm, though I can't resist sneaking a few spoonfuls of cold leftovers straight from the fridge. 😉

Can I freeze corn pudding?

That's a great question. I haven't tried freezing this vegan version yet. However, the Just website says JUST Egg should not be frozen, so I suppose that's our answer.

I wouldn't worry, though. This recipe doesn't make a huge 9 x 13 casserole's worth like my aunt Martha's recipe does. Plus, it's so delicious I think you'll finish off the leftovers with no problem!

If corn pudding is as nostalgic and comforting for you as it is for me, I truly think you'll love this vegan version. If you try the recipe be sure to leave a comment and star rating below to let us know how it turned out! 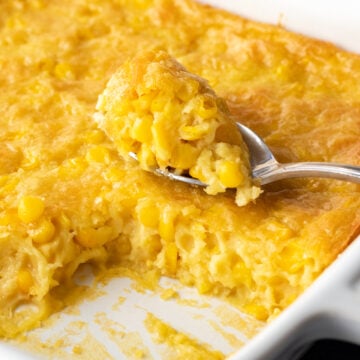 If you don't have a kitchen scale, measure the flour by whisking it first. Then spoon it into a measuring cup and level off the top.

I haven't had a chance yet to test the recipe with a gluten-free 1:1 flour blend but suspect it will work just fine. If you try a GF version be sure to let us know in the comments.

Store leftover corn pudding in an airtight container in the refrigerator for up to 4 days. Reheat individual servings briefly in the microwave. You can also reheat in a 325 degree oven. Cover the baking dish with foil, and bake until warmed through.