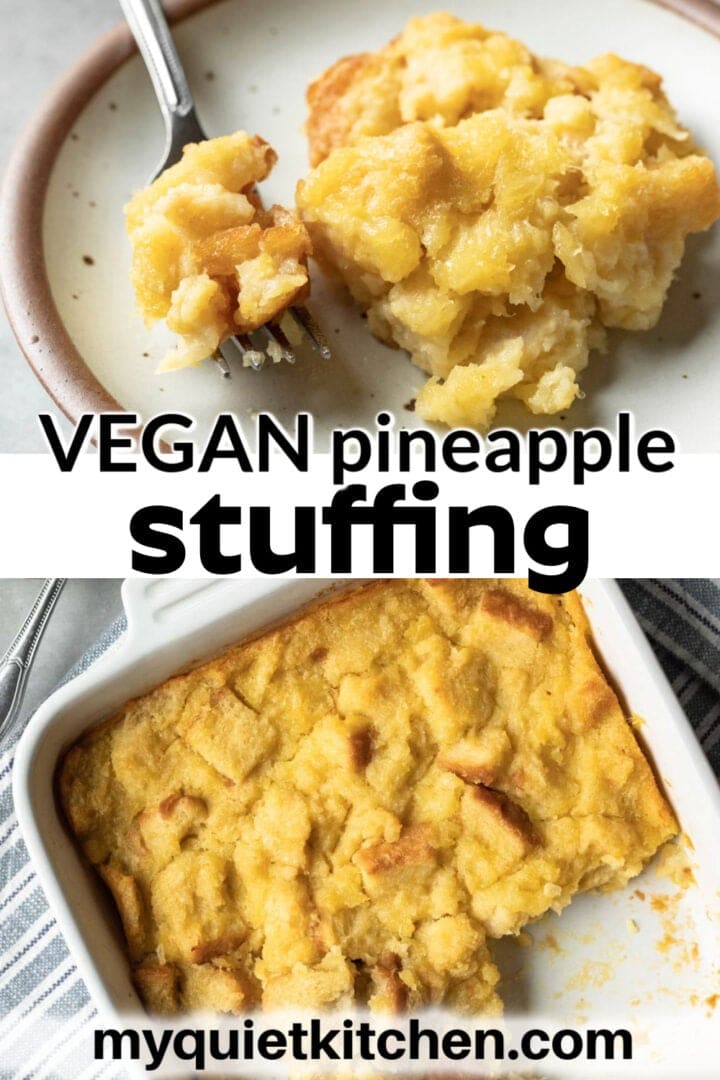 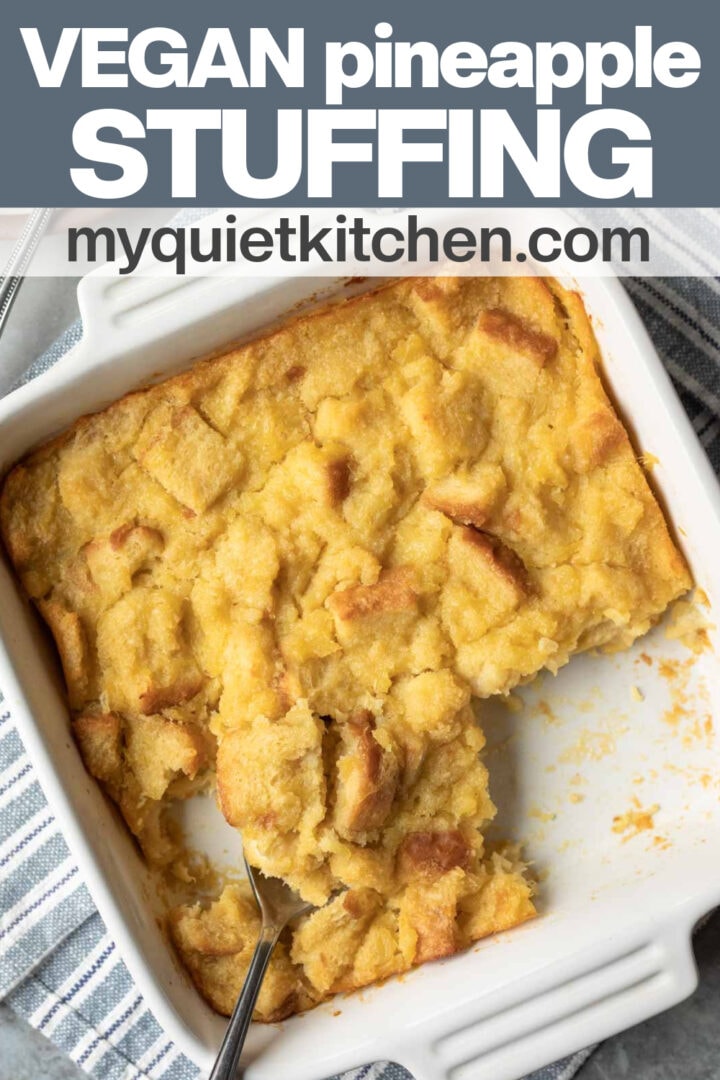 Vegan pineapple stuffing is a unique, easy, and sweet holiday side dish (or dessert) that will have everyone asking for seconds! It's like pineapple bread pudding meets French toast. With sweet and tart pineapple, soft chunks of bread, and a hint of savory from JUST Egg and vegan butter. Just 12 simple ingredients and no special equipment required!

Pineapple stuffing is often served on Christmas and Easter, but it's also fantastic for brunch or dessert any time of year.

What is pineapple stuffing?

Just when you think holiday side dishes can't get any weirder than strawberry pretzel salad and corn pudding, in comes pineapple stuffing.

I recently stumbled across this unique dish, and as soon as I read the description and ingredients I couldn't wait to make a vegan version!

In a lot of ways it reminds me of corn pudding, but with crushed pineapple and bread instead of corn and cream.

It's fluffy, moist, soft, sweet enough to be dessert, and lightly savory in a way similar to French toast.

I was surprised I'd never heard of pineapple stuffing, so I searched online to see if I could learn more about the origin and the regions where it's most popular. But it was surprisingly difficult to find answers.

Pineapple casserole on the other hand, is very clearly a Southern favorite. It's similar to stuffing, but calls for shredded cheese instead of bread and has a buttery cracker topping. In other words, it just might be the weirdest of the weird!

Oddly enough, since I've lived most of my life in the South, I had never heard of pineapple casserole either. Weird. Anyway, back to stuffing...

Traditionally, pineapple stuffing is served with ham, which makes sense, I suppose, since pineapple is often paired with ham.

Outside of Christmas and Easter, pineapple stuffing may also be served with other types of pork or sausage.

Now that I've tasted this vegan pineapple stuffing, I can see myself enjoying it more often for dessert than as a side dish.

Served slightly warm with a scoop of vanilla oat ice cream sounds like heaven. And for a special occasion brunch or breakfast, it will be a delightful sweet, bready treat alongside tofu quiche or vegan breakfast casserole.

How to Make It Vegan

Similar to my corn pudding recipe, the 2 main ingredients we need to replace in pineapple stuffing to make it vegan are:

Easy enough, right? JUST Egg worked SO well in veganizing my family's corn pudding recipe, so using it again here was a no brainer.

And for the butter, I used Miyoko's cultured European-style butter because the flavor is the best I've come across.

Mr. MQK and I had no idea what to expect the first time I tested the recipe. And we were both pleasantly surprised that this strange-sounding concoction was so delicious!

How to Make Pineapple Stuffing

Inspired by the mains traditionally served with pineapple stuffing, this holiday season why not try a seitan ham? Here's a great vegan ham recipe by Rosa of This Healthy Kitchen.

Or try this tofu ham by Larisha and Andrew of Make It Dairy Free.

My vegan turkey roast has a salty maple glazed "skin" and is wonderfully savory, moist, and delicious.

Here are some savory side dishes to serve with pineapple stuffing:

Note: some pineapple stuffing recipes include a more savory spin, adding sauteed celery and sometimes even onion and herbs. But I just can't bring myself to get that weird... yet.

For now, this harmoniously sweet version is making our taste buds very happy!

Can I make pineapple stuffing in advance?

Yes, you can prep this recipe ahead of time two different ways. Assemble it in the morning and refrigerate until ready to bake on the same day. I wouldn't store it this way overnight because the bread will break down. Or fully bake the stuffing up to 3 days in advance. Cover and refrigerate, then move the covered dish to the oven to reheat about 45 minutes before serving.

Stored in an airtight container in the refrigerator, the stuffing is good for up to 5 days. Reheat individual servings in the microwave.

Can you freeze pineapple stuffing?

Yes, it is freezer-friendly. Place in a freezer-safe container or storage bag and freeze for up to 1 month.

I hope you enjoy this vegan take on pineapple stuffing!
If you try the recipe be sure to leave a comment and star rating below to let us know how it turned out! ⭐️⭐️⭐️⭐️⭐️ 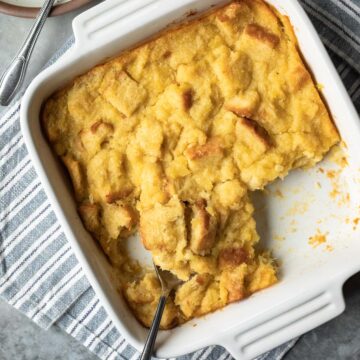 Author: Lori Rasmussen, My Quiet Kitchen
Pineapple stuffing is the unique and sweet holiday side dish (or dessert!) everyone will rave about. It's like bread pudding, cake, and French toast all rolled into one! With sweet and juicy pineapple, thick, soft bread, and a hint of savoriness from JUST Egg and vegan butter. It's a delightfully different side dish for Easter and Christmas, and perfect anytime for brunch or dessert!
Servings: 8 servings
5 from 2 votes
Print Recipe Pin Recipe
Prep Time: 10 mins
Cook Time: 55 mins
Total Time: 1 hr 5 mins

Measuring Flour If you don't have a kitchen scale, measure the flour by whisking it first. Then lightly scoop up ¼ c cup, and level off the excess on top. Gluten-Free Gluten-free bread that is also vegan can be tricky to find, but if you have access to some, I'm sure it will work fine! And for the flour, a gluten-free baking blend is a good swap for regular all-purpose. Storing and Reheating Store leftover pineapple stuffing in an airtight container in the refrigerator for up to 5 days. Reheat individual servings briefly in the microwave. You can also reheat in a 350 degree oven. Cover the baking dish with foil so it doesn't dry out, and bake until warmed through. Leftovers may be frozen for up to a month.