Vegan Strawberry Pretzel Salad is a dairy-free, gelatin-free take on the much beloved potluck and holiday dish. This version uses agar agar and real strawberries to make vegan "jell-o." Underneath is a layer of sweet and fluffy cream cheese, followed by a crunchy, buttery pretzel crust. 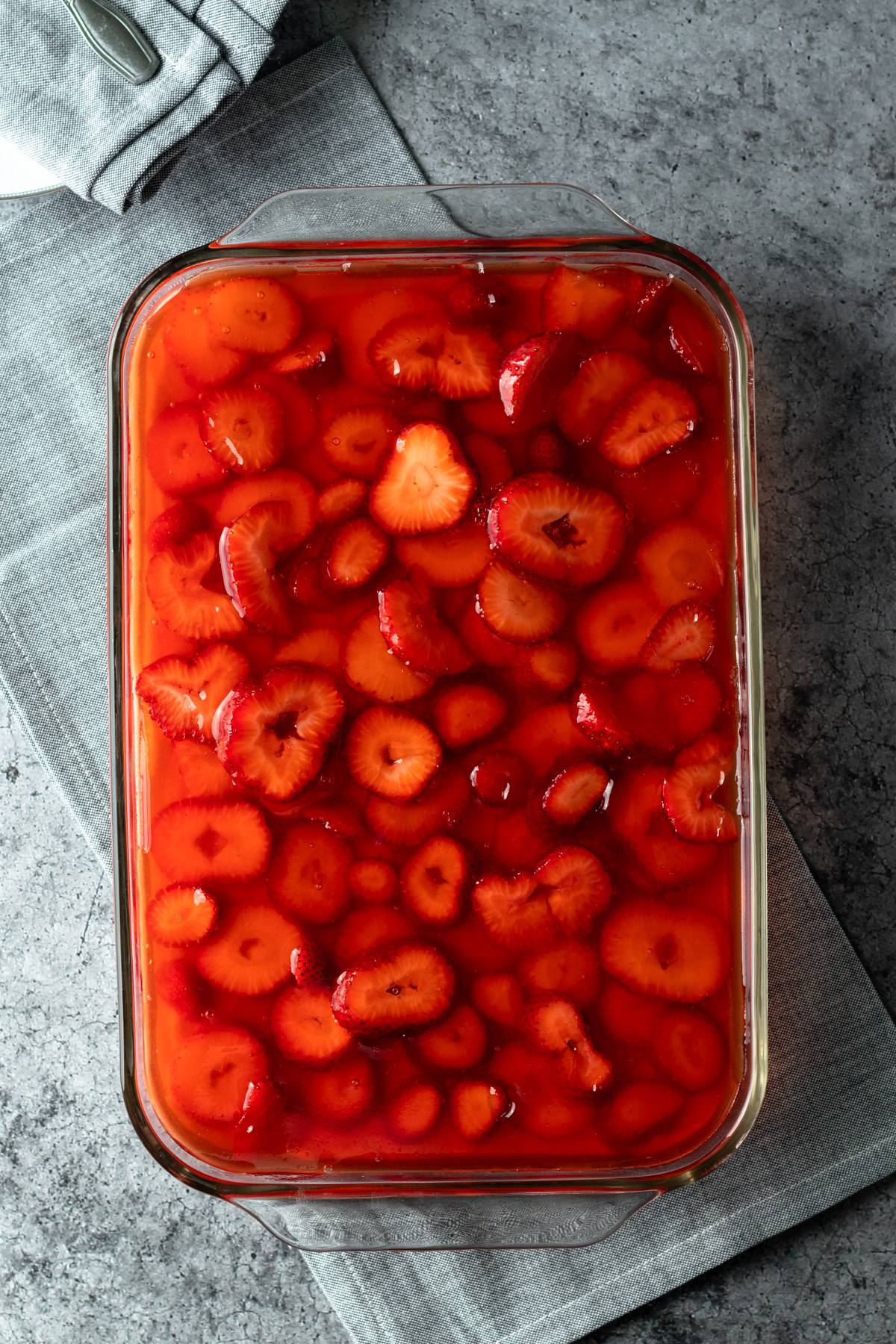 If you've had strawberry pretzel salad before, you already know what a delicious yet unlikely combination it is. And if you've never heard of it? You're in for a treat!

First, a little warning for all of you healthy eaters out there.....

Don't let the "salad" part of the name fool you. This is a seriously decadent dessert. Think of it like cheesecake topped with strawberries but with a sweet and salty pretzel crust instead of a graham cracker crust.

Before I show you how to make Vegan Strawberry Pretzel Salad, can I tell you a secret? This was a tough one. This project has been about a year in the making. After multiple trials last summer, and pounds and pounds of strawberries, I got so frustrated I had to step away from it for a while.

Like six months of NOPE. I don't even want to THINK about pretzel salad.

With strawberry season approaching, I knew I needed to pick myself up and try, try again. And this time? Nailed it! WOOHOO! 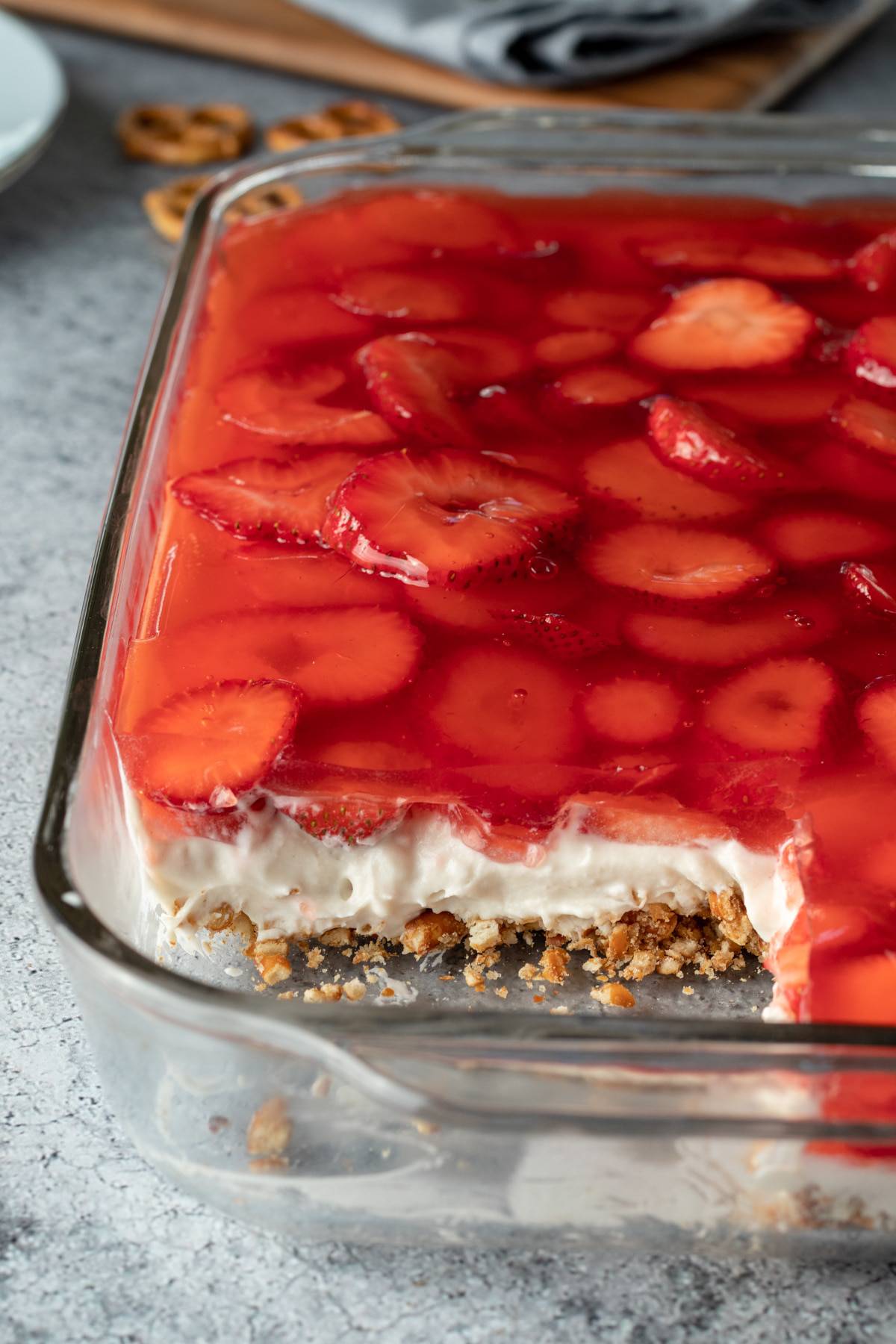 The Origin of Strawberry Pretzel Salad

If you're not familiar with strawberry pretzel salad, it's a very popular dish in the Southern United States (and I'm guessing other areas, too). A mainstay of potlucks and summer cookouts, it's also a traditional holiday dish for many families. According to various websites, pretzel salad was born in the 1960s in a cookbook called The Joys of Jell-O.

And yes, the combination seems strange at first. But once you taste pretzel salad, you quickly understand why it became such a hit. Imagine this - sweet and tangy cream cheese + crunchy, sweet, and salty pretzels + fresh strawberries suspended in jell-o? It's a total onslaught of complementary flavors and textures.

Anyway, after decades of everyone getting along just fine (in person), the internet introduced legions of new folks to this bizarre-sounding recipe. And some people just couldn't get over the name "salad." But when we remember its origin, a time when housewives were cooking up all sorts of ridiculous, gelatinous dishes, it makes a bit more sense.

But apparently even Jell-O decided to change with the times (Well, barely. I mean, they still make their products from animal parts. But I digress!). Their website now calls the original recipe "Strawberry Pretzel Squares." 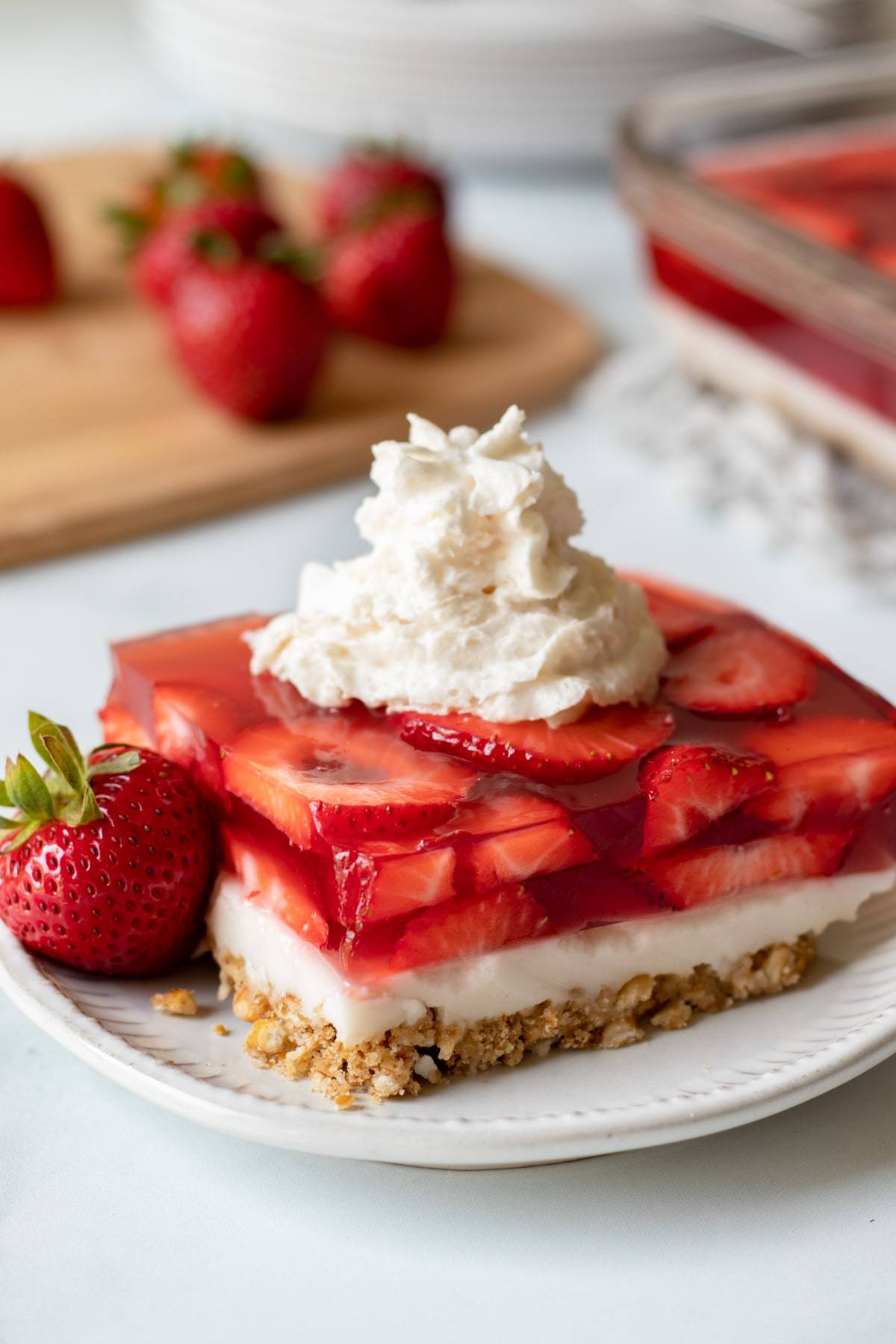 This was one of last summer's first test batches, with agar in the middle layer.

The Trials of Creating a Vegan Version

In February 2019 I was working on a recipe for the Living Jin Agar Agar Cookbook. I scoured the internet and was shocked that I couldn't find a vegan version of strawberry pretzel salad (soon I would understand why).

So I created a recipe for mini individual ones. That recipe got picked up by Mother Earth Living magazine (see it here). I used agar in the middle layer of those individual pretzel salads, and it worked well, especially since the purpose of the recipe was to highlight agar for the Living Jin recipe competition.

But I really wanted to create a version for the blog that would mimic the iconic red and white dessert in the big glass Pyrex dish. And it was very important to me that it have a creamy and fluffy middle layer, which meant no agar.

What makes this tricky is the layering. See, agar sets somewhat quickly, more quickly than gelatin, which means that after bringing the strawberry mixture to a boil you need to pour it onto the cream cheese layer while it's still pretty darn HOT. Maybe you see where this is headed....

When the middle layer contained agar, the layering worked fine because you're pouring agar onto set agar. BUT with a middle layer made up of vegan cream cheese and coconut cream....

Hot liquid poured onto fat creates a hazy, not-very-attractive vegan jell-o. Totally unacceptable! I wanted our vegan jell-o to be as clear and gorgeous as possible. 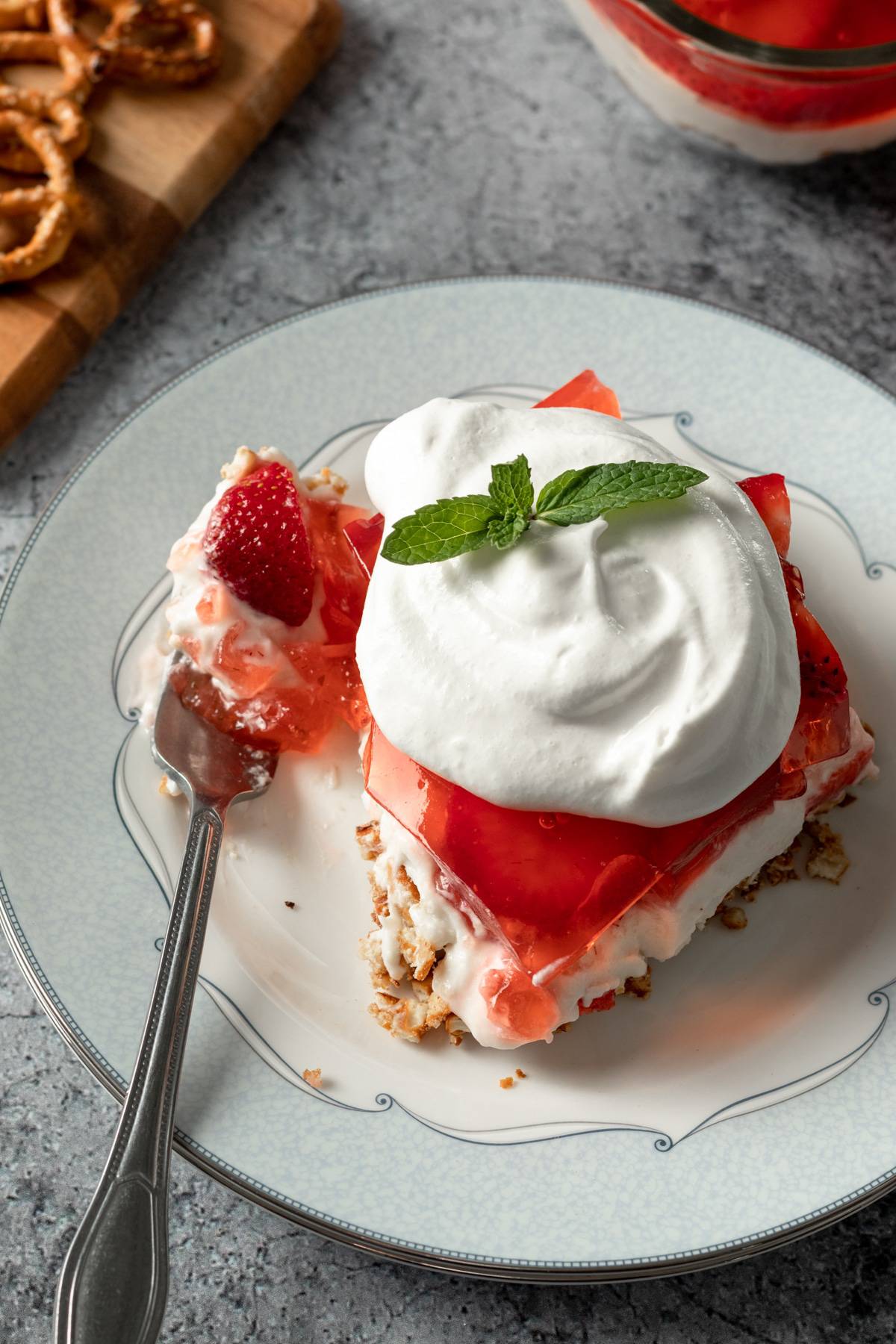 Last Thanksgiving at my aunt and uncle's house in Nashville, I was telling everyone about my agar/cream cheese problem. I should add, none of them are vegan, and they're all huge pretzel salad fans! (My aunt is a pretzel salad pro, just like Grandmama.) That's when my cousin, a professional cook, suggested freezing the cream cheese layer.

My immediate thought was, "Of course! Why didn't I think of that?" For some reason I was trying to rush things.

I was chilling the cream cheese layer in the fridge but hadn't thought to semi-freeze it before pouring on the agar layer.

Another thing I realized during the final two test batches is that you can actually allow the agar to cool more than I previously thought (just keep whisking). So when you combine a somewhat cooler strawberry layer with a super cold cream cheese layer, problem solved! 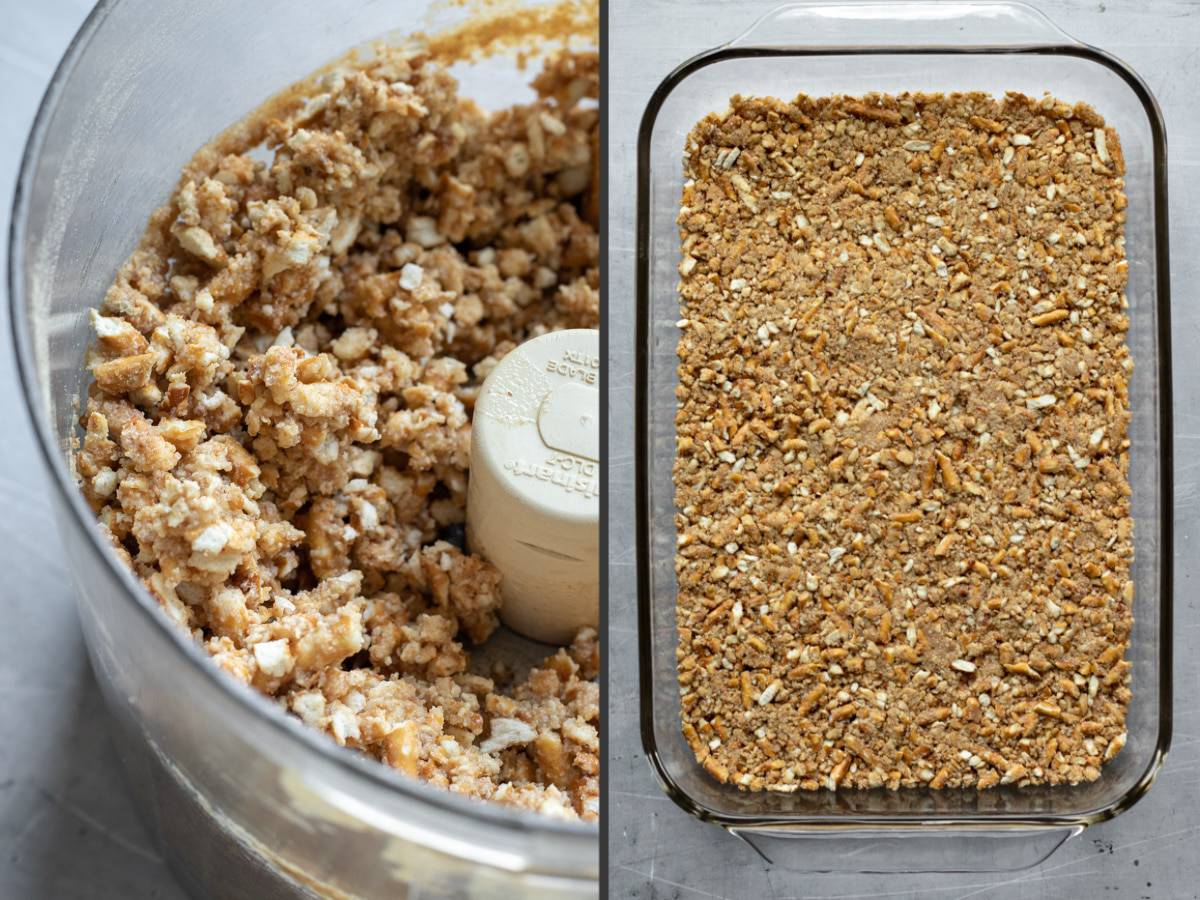 My main goal is for you to have success the very first time you make this dish! So here are step-by-step photos to give you a good overview of the process.

When you're ready to make pretzel salad, be sure to scroll down to the full recipe card. 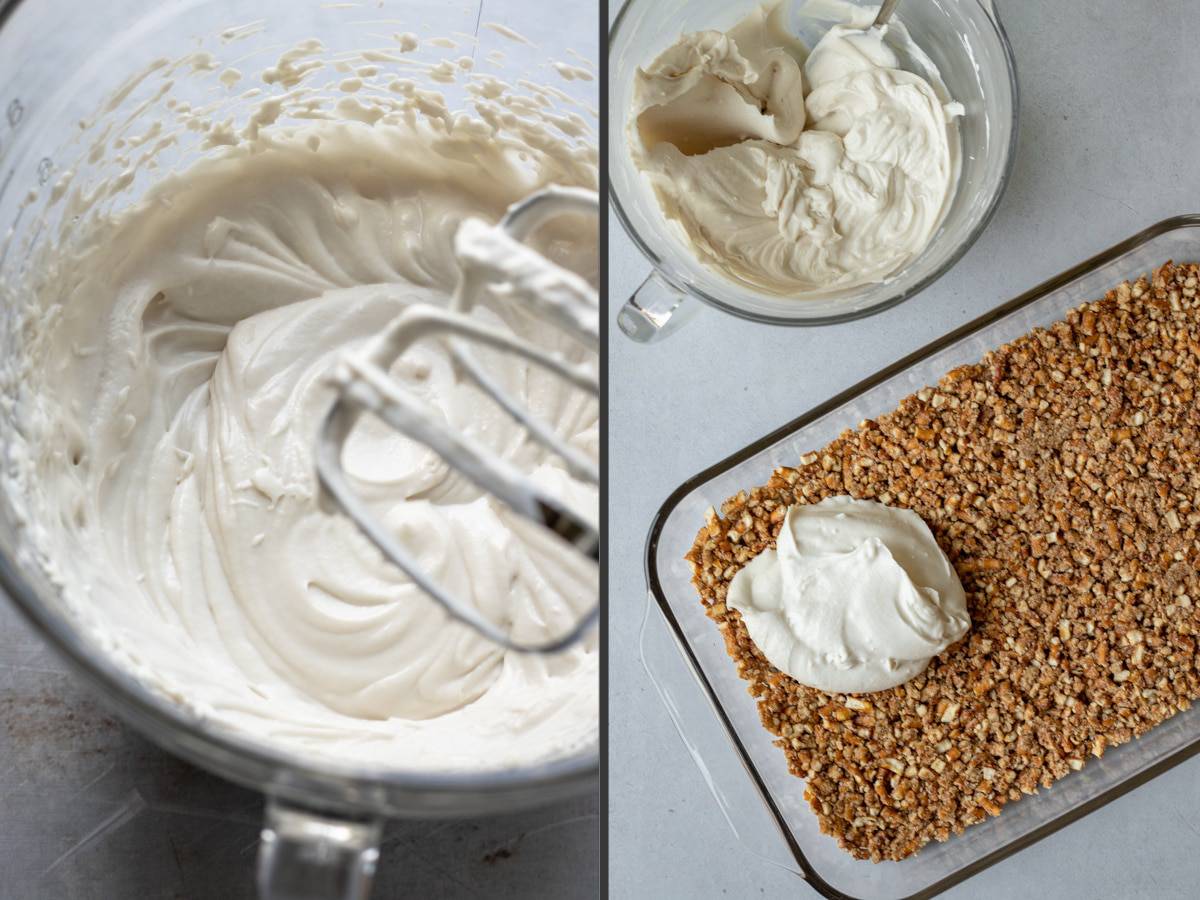 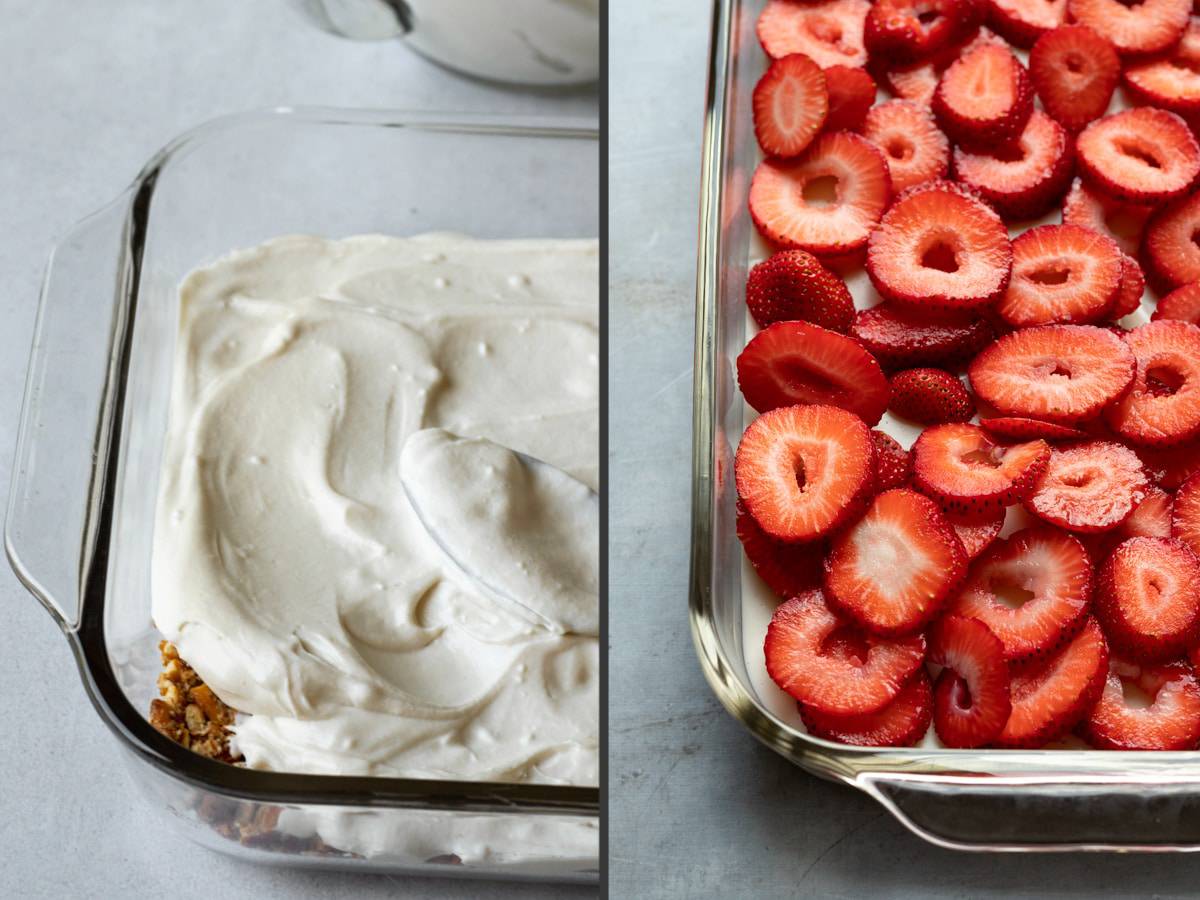 There are a few steps involved in making strawberry agar, but it's really easy!

This stage requires a bit of patience. As you're whisking the agar while it cools, just keep an eye on it. If you see signs of it beginning to set (like really set), you'll need to pour it into the casserole dish ASAP. 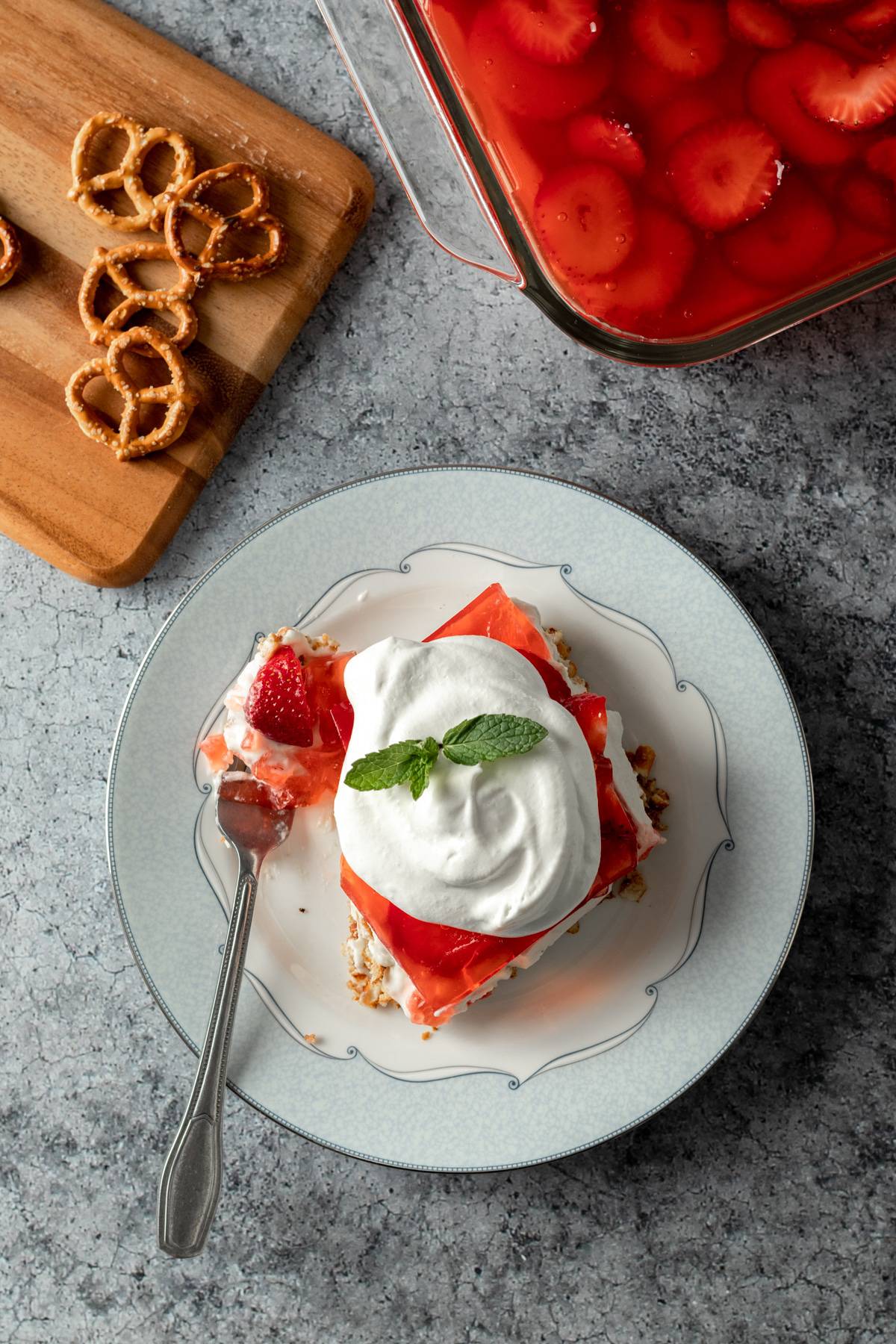 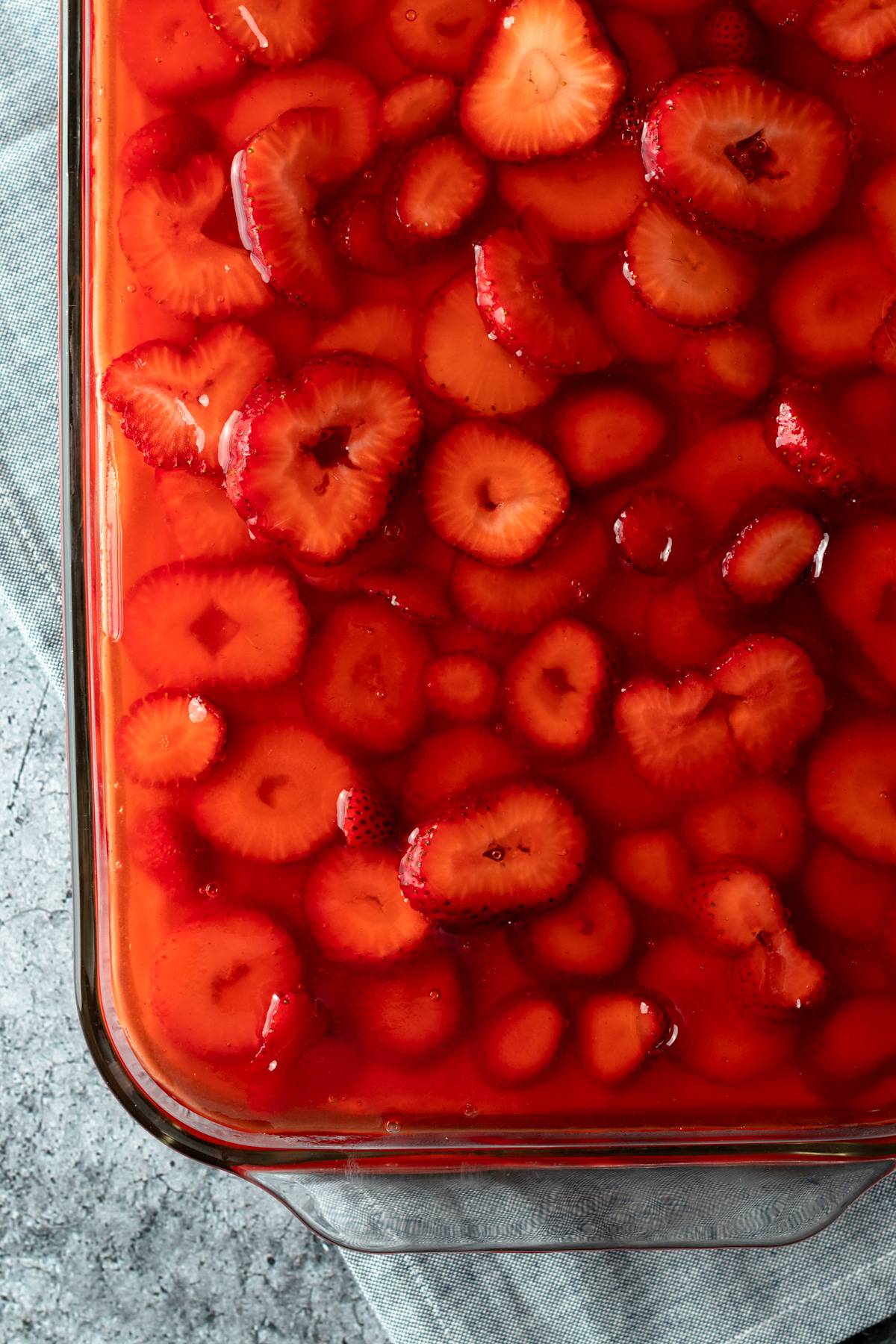 If you grew up enjoying Strawberry Pretzel Salad on special occasions like I did, I hope it will warm your heart to have a vegan version to share with friends and family! If you try the recipe please let me know in the comments below.

Cheers to modern, vegan versions of childhood favorites because anything they can eat we can eat vegan. 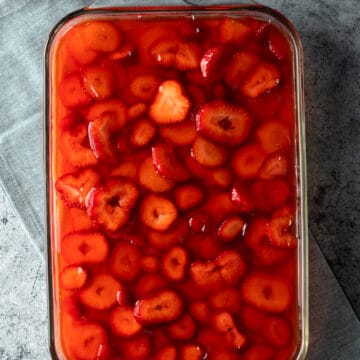 Tips and Storage Notes: On day 2 the pretzel crust won't be quite as crunchy. So it's best to make pretzel salad the day you plan to serve. Be sure to allow at least 5 hours total for prep and chilling. Though I haven't tested this, you can probably substitute Simply Delish strawberry jel for the agar layer. You need 3.5 to 4 cups of jell-o (when liquid), or about 3 boxes. If you like a thicker pretzel crust, increase the crust ingredients by 50%. Don't be tempted to reduce the amount of butter in the crust. It holds the crust together and keeps the pretzels crisp! Keep strawberry pretzel salad refrigerated until ready to serve.