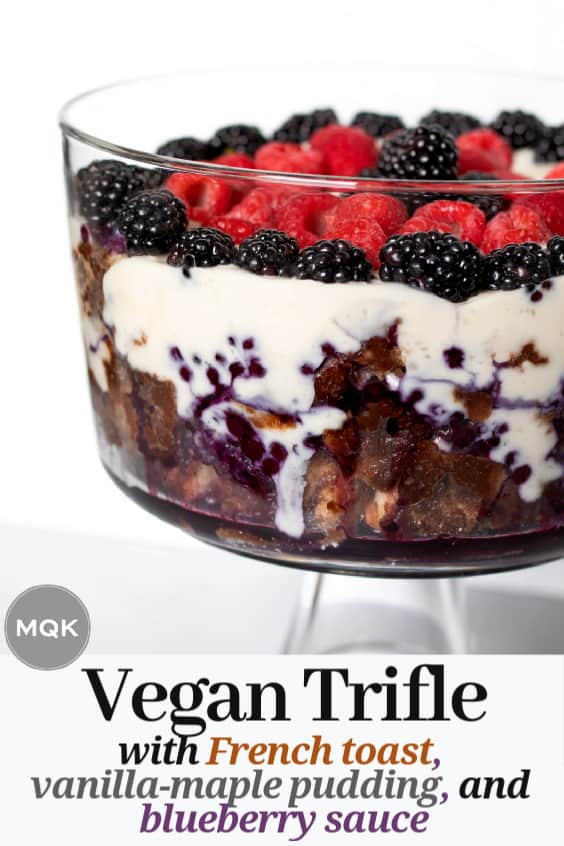 This Vegan French Toast Trifle combines layers of baked French toast, homemade blueberry sauce, and a lusciously creamy maple-vanilla pudding. From a special-occasion brunch to your holiday dessert table, this vegan trifle is guaranteed to impress! 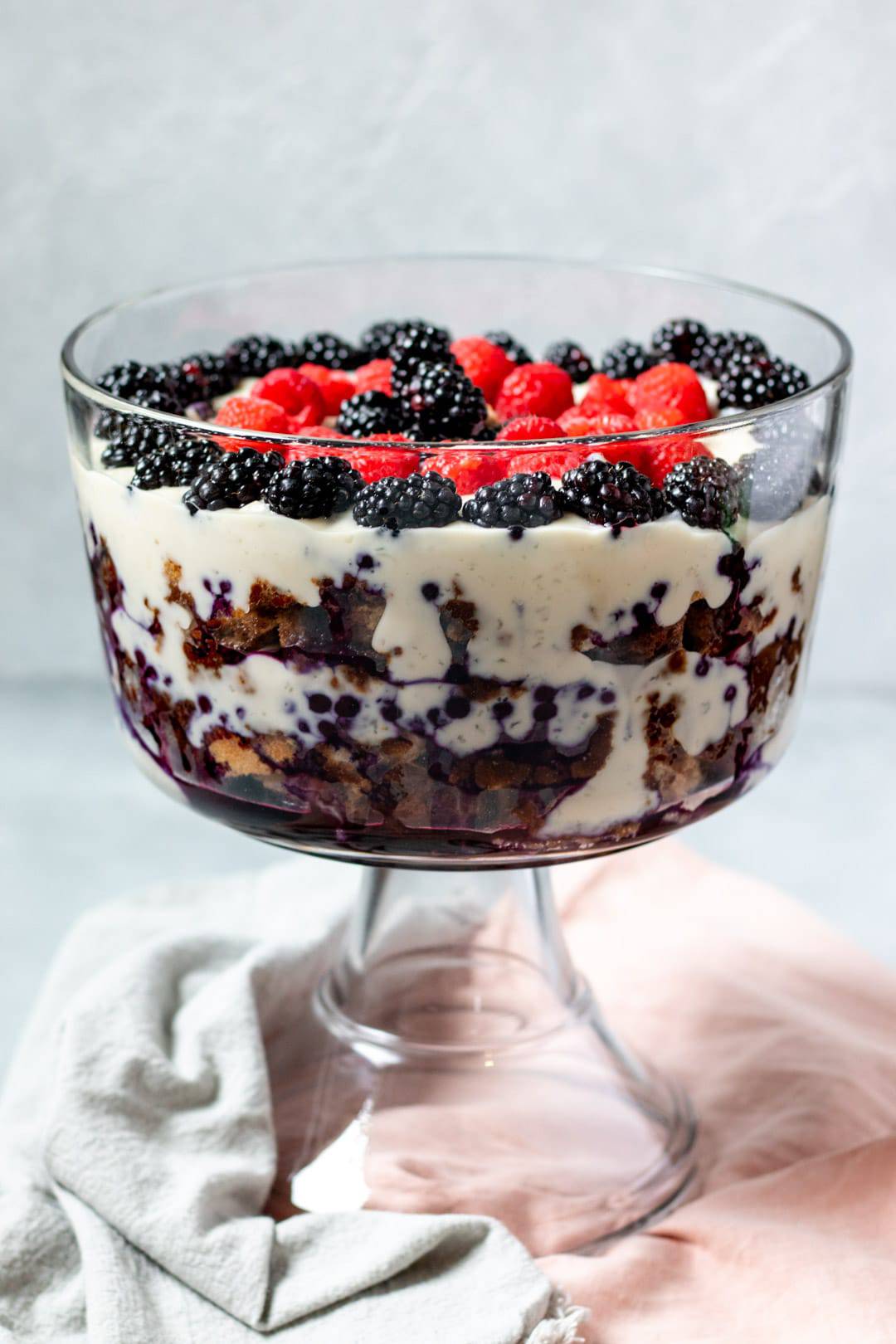 What's your favorite type of dessert? For me, the answer is easy. Combine cake or something bread-y with smooth, cool, creaminess, and I'm all in! 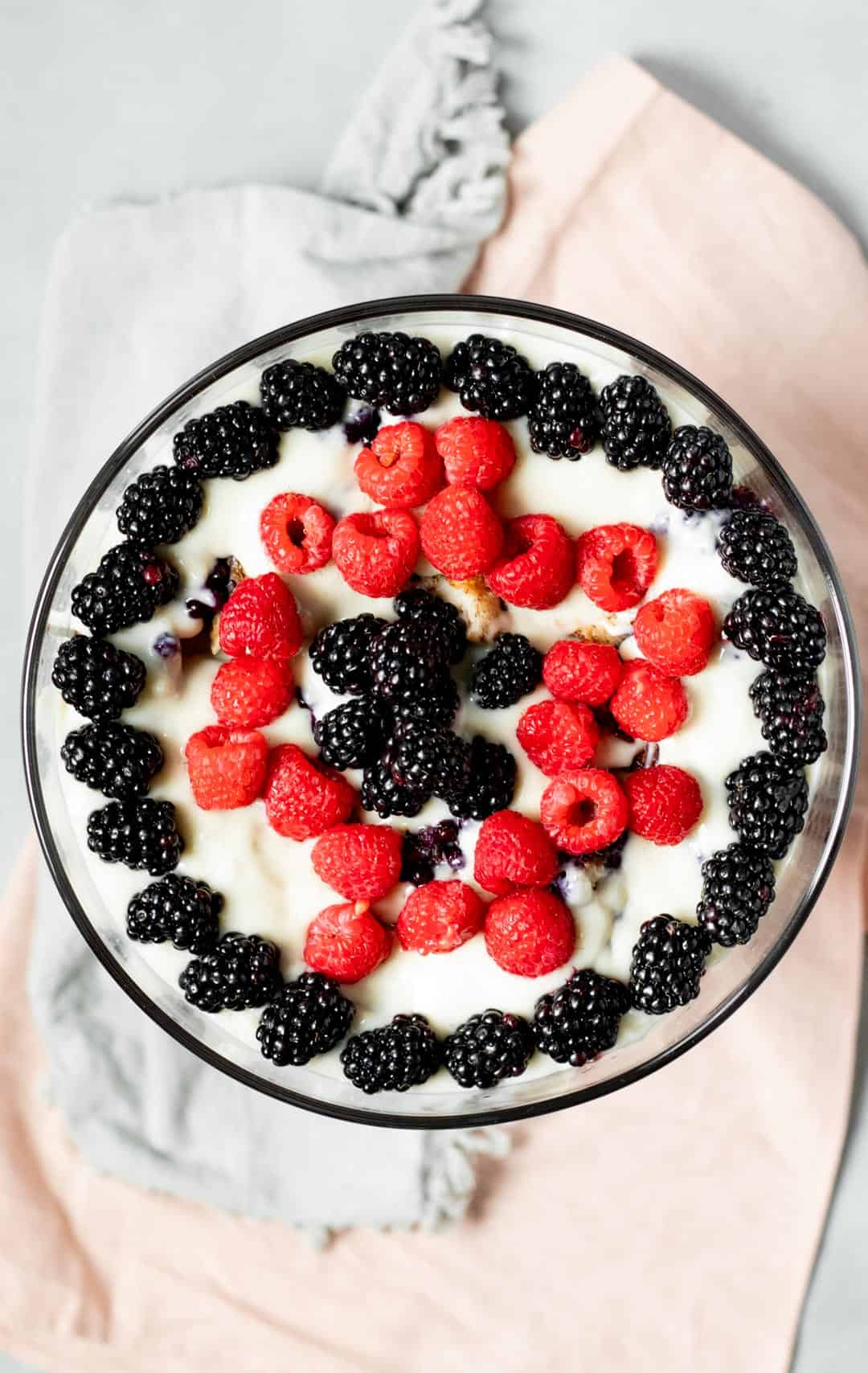 And my point is, what's better than a trifle? Typically made with cake, layers of pudding or custard, whipped cream, and fruit. SO many good things packed into one beautiful, see-through bowl, which means you really get to eat with your eyes first. And we all know how important that is. Then, that beauty becomes a messy, irresistible pile of textural, mingling flavors scooped onto your plate. Whew. It's too much.

Well, we're doing that today with this vegan trifle but with a twist. Our bready ingredient is baked vegan French toast!

How to make the baked French toast for your trifle

We're going to soak some sourdough, or other sturdy bread, in a simple French toast batter and then play Tetris with it! Actually, it's much easier and less stressful than Tetris. As you can see in the photo above, I started with one whole slice of bread against the right edge of the pan, then cut and tore the remaining pieces until the round pan was filled. Each pan has two layers of the bread, which become one big, thick layer during baking. 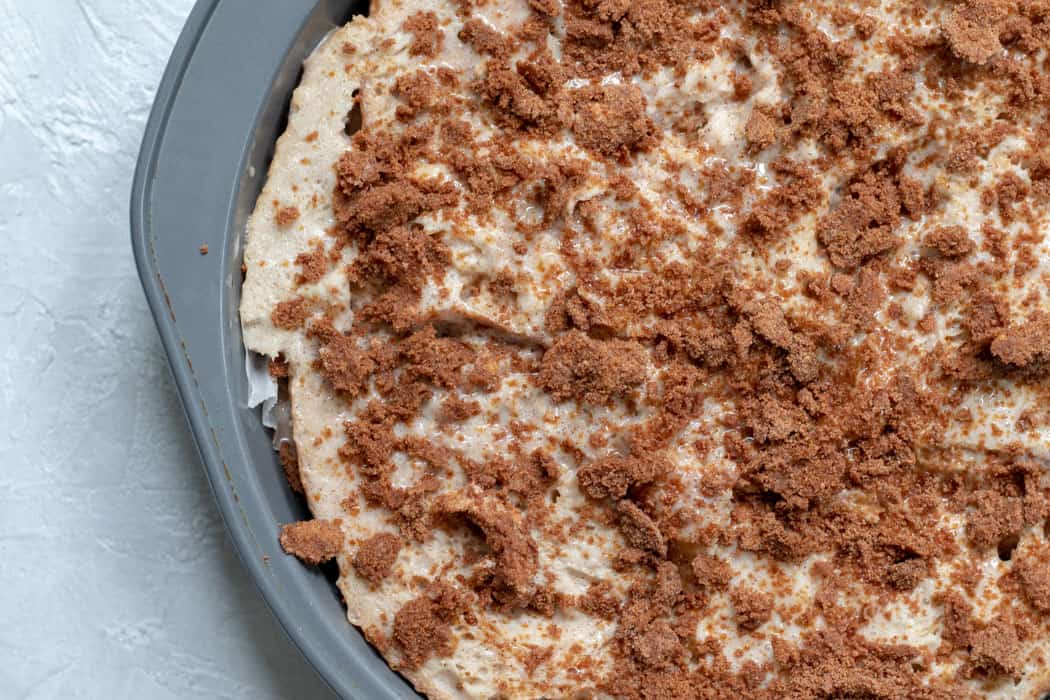 Oh, and before going into the oven, each pan gets a generous sprinkle of cinnamon sugar. 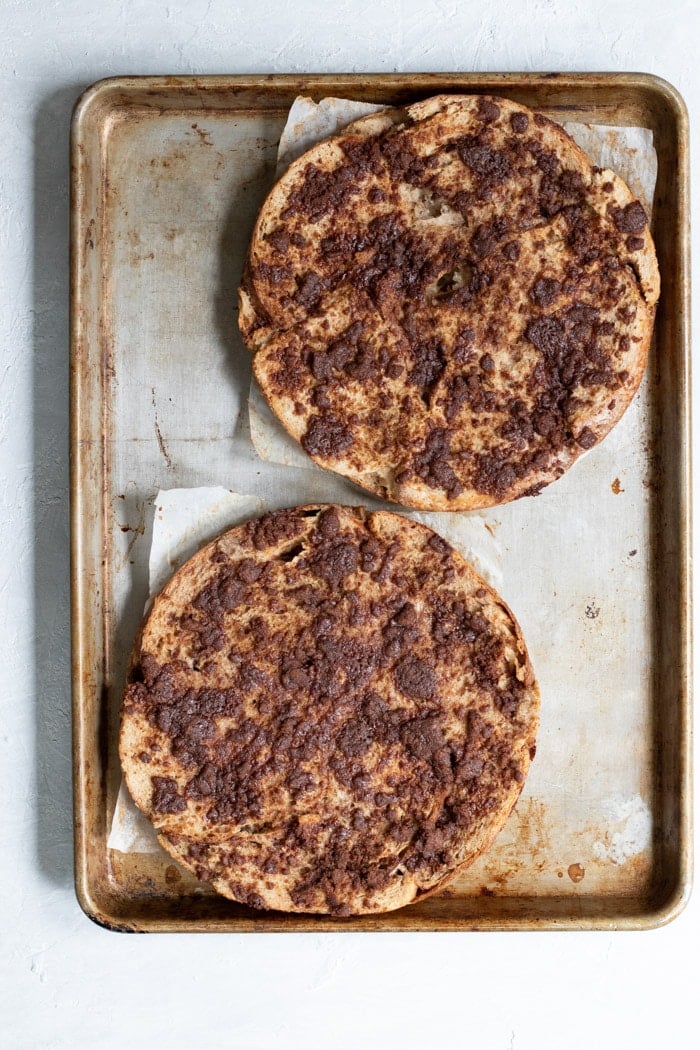 See the two layers of sliced bread in each cake below? All baked together! 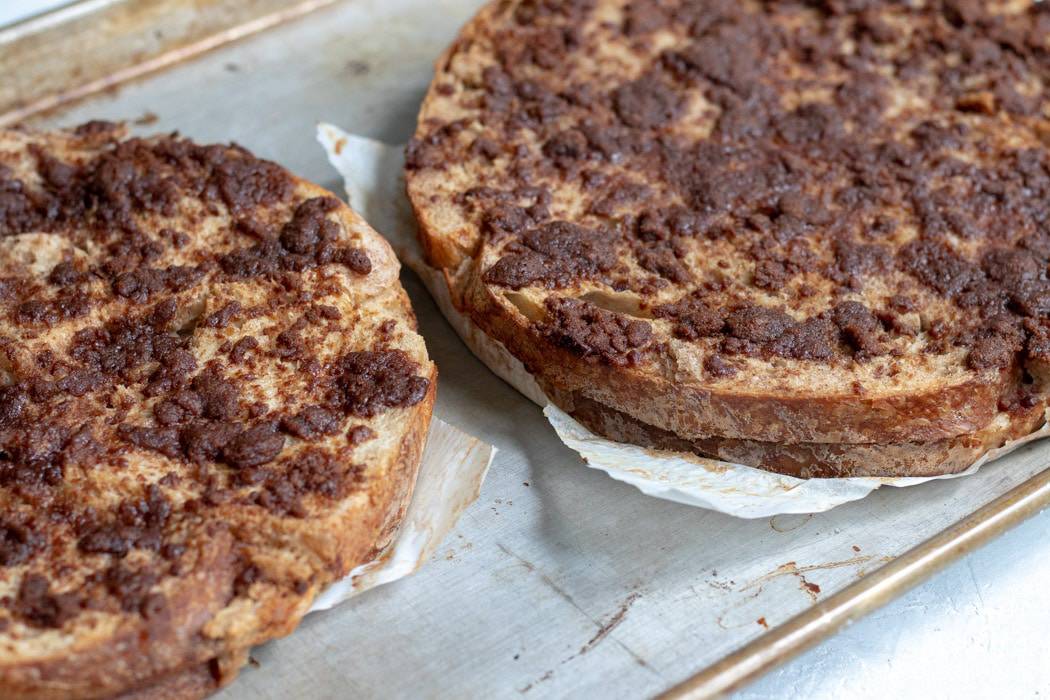 Other elements in this vegan trifle

Maple vanilla pudding - whipping up this 4-ingredient maple-sweetened vegan pudding couldn't be easier. Simply whisk everything together, and heat on the stove until thickened.

Blueberry sauce - made with fresh or frozen blueberries, this 5-ingredient sauce also cooks on the stovetop in just a few minutes.

Obviously, some freshly whipped coconut cream dolloped on top is highly, highly recommended. If only I'd remembered to put a can of coconut milk in the fridge the day before! Another option is Coco Whip by So Delicious (find it in the freezer section). It's dangerously good. 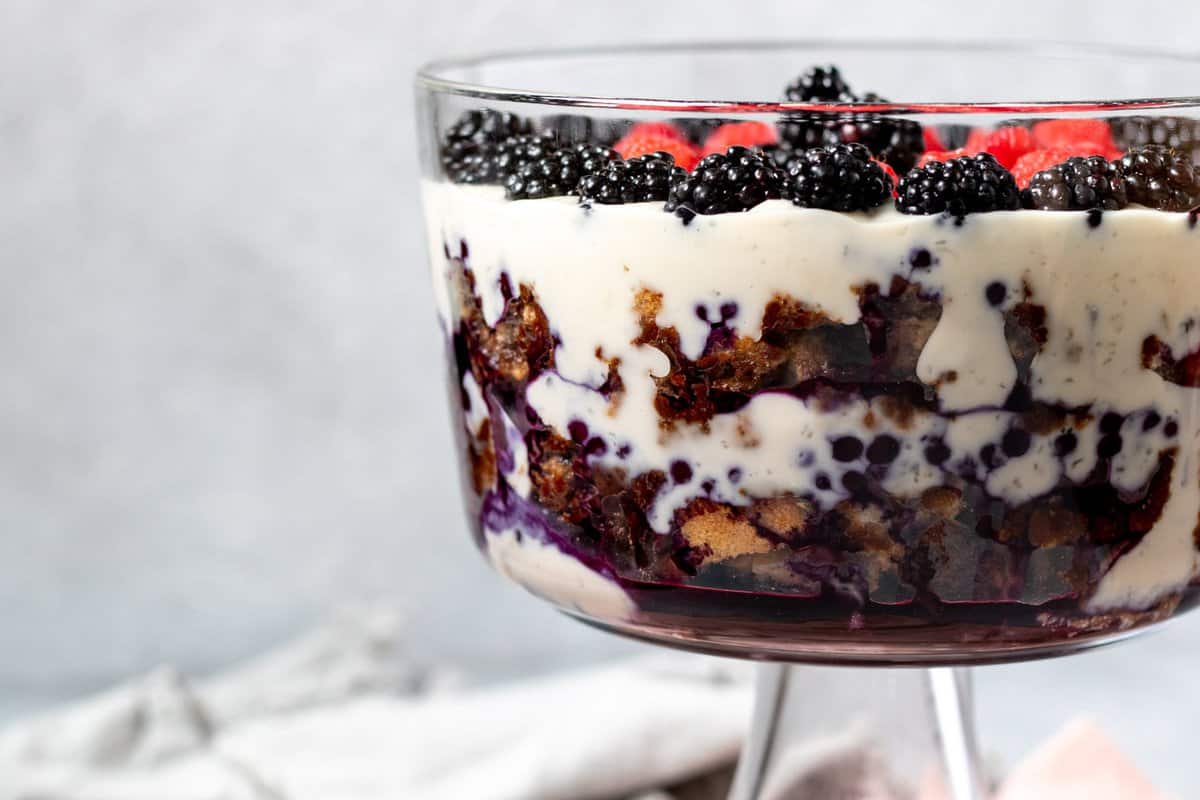 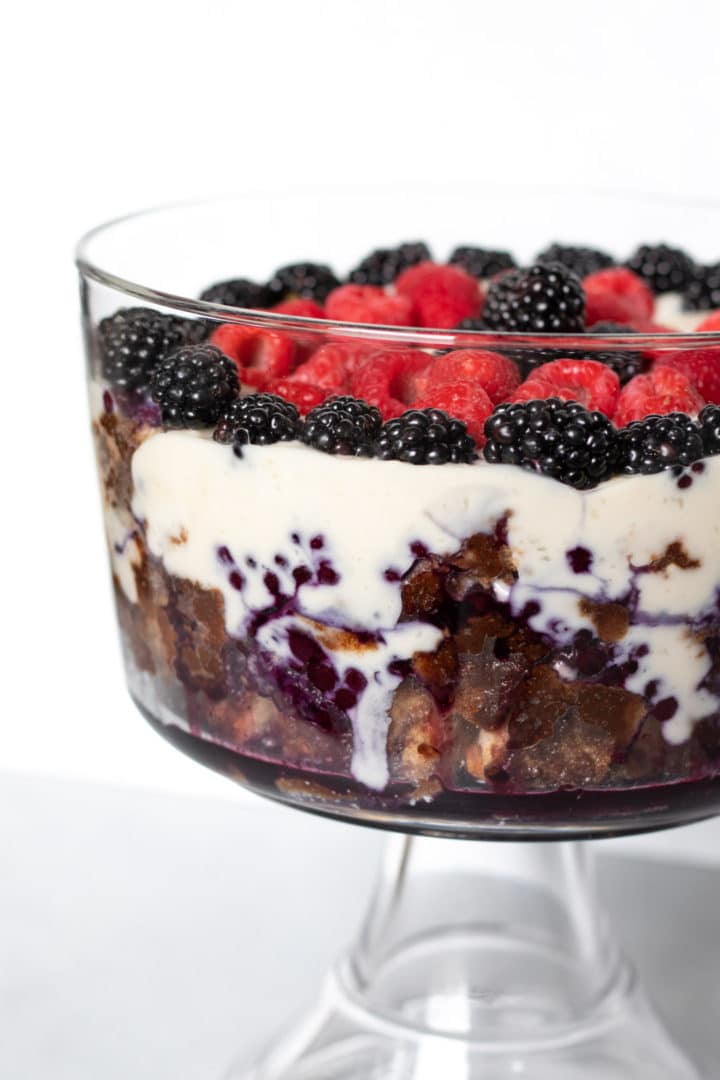 Tips for Assembling the Trifle

Each component of the trifle needs time to cool and/or chill before assembly. If you're making this for a party, it works well to make everything a day in advance, then assemble the trifle just before serving.

If you're making this the day you're serving, be sure to allow at least two hours for the pudding and blueberry sauce to chill (placing the bowls in an ice bath is a great way to speed up the process, if needed). Then, assemble and serve immediately.

In case you're wondering, this recipe is definitely sweet enough to serve as a dessert, but could also be served at brunch. Overall, it's less sweet than many desserts, and for goodness' sake, people eat doughnuts for breakfast! If doughnuts are an appropriate breakfast or brunch food, this vegan trifle definitely deserves a pass.

I hope you enjoy this Vegan Trifle with French Toast as much as we do. If you try it I would love to hear from you. You can give the recipe a star rating below and also share a photo on facebook or instagram. Just tag me @myquietkitchen to make sure I see it! 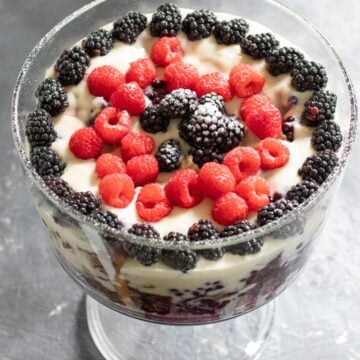 Individual components of the trifle can be made a day in advance and assembled just before serving. Once assembled, the trifle is best consumed within a few hours. Refrigerate leftovers for up to 2 days.