Friends, I don't use the word "best" lightly, but this vegan mac and cheese recipe truly is my favorite and the best I've ever tasted. It's simple to prepare and calls for classic vegan cheese ingredients like cashews and nutritional yeast PLUS a secret ingredient. The result is the creamiest and cheesiest, and yes, I'll say it again, BEST vegan mac and cheese you've ever had. It's also gluten-free if you use gluten-free pasta and nut-free with one simple substitution! 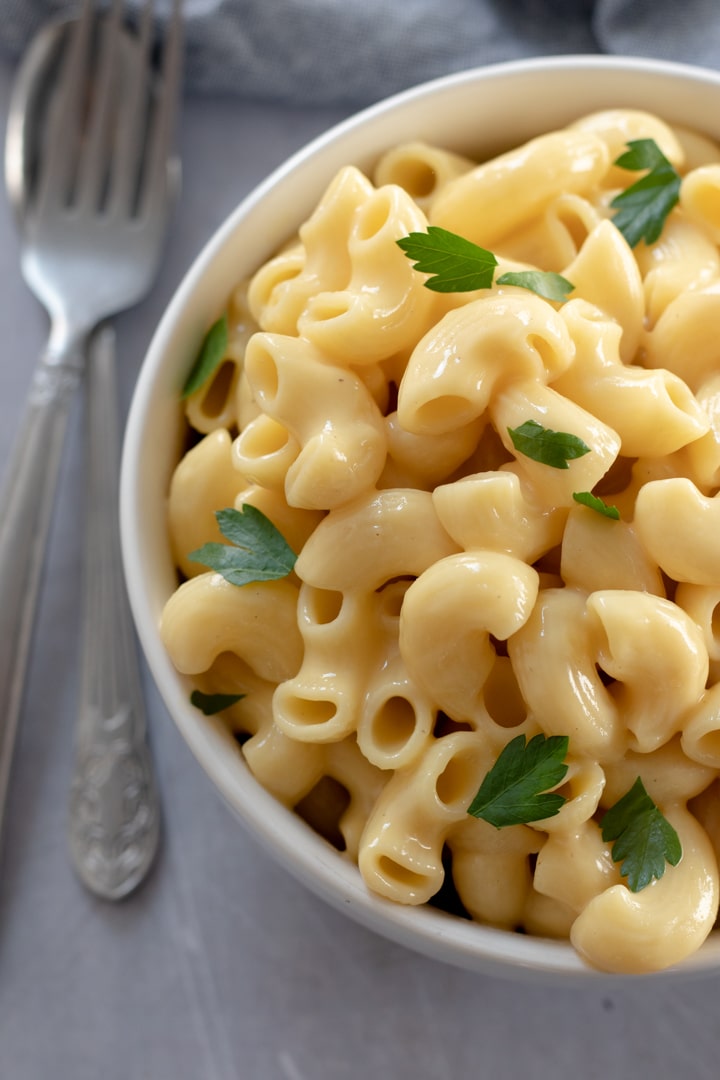 So what makes this the best vegan mac and cheese?

In all my vegan years I’ve made more than a few mac and cheese recipes, and to be honest, none of them ever got me excited enough for a repeat visit. I know that sounds harsh, but the only way I know how to write this post is with total honesty. So let’s get this out of the way! Vegan mac and cheese traditionally has three major problems:

There. Okay, now that we’ve identified our problems we can focus on the solutions!

How This Vegan Mac and Cheese Recipe Came About

The Asheville Vegan Society holds an annual mac and cheese cookoff every year in March. This was the first year I decided to throw my hat into the ring..... except that when I signed up I didn't yet have my own favorite mac and cheese recipe. Around that time I happened to see an instagram post by Timothy Pakron (Mississippi Vegan) about his White Truffle Mac and Cheese. As soon as I read the recipe I knew he'd cracked the code.

For me, the main takeaway was this: it's 2019, and we now have delicious, store-bought vegan cheese options, which means it's time to rethink our strategy. When a home cook wants to make traditional, dairy-based macaroni and cheese what do they do? They go to the store and buy cheese, right? They don't try to make their own cheese from scratch (although, if they had to we would probably have a lot more vegans).

So let's rid ourselves of the pressures to make cheese sauce from ingredients like potatoes and carrots (unless of course we're trying to make a healthy mac and cheese, which is great). But for the cheesiest, best, most traditional tasting vegan mac and cheese, it's helpful to revisit the recipes we're interpreting and start again.

Field Roast, Violife, and Follow Your Heart are experts, so who am I to try to make something that tastes cheesier than what they've accomplished? It feels so obvious to me now! [cue sound of angels singing] I actually plan to continue my mac and cheese adventures as soon as this is posted. Primarily I want to test other cheeses, including Miyoko's and Daiya, because they're possibly more widely available for some people. 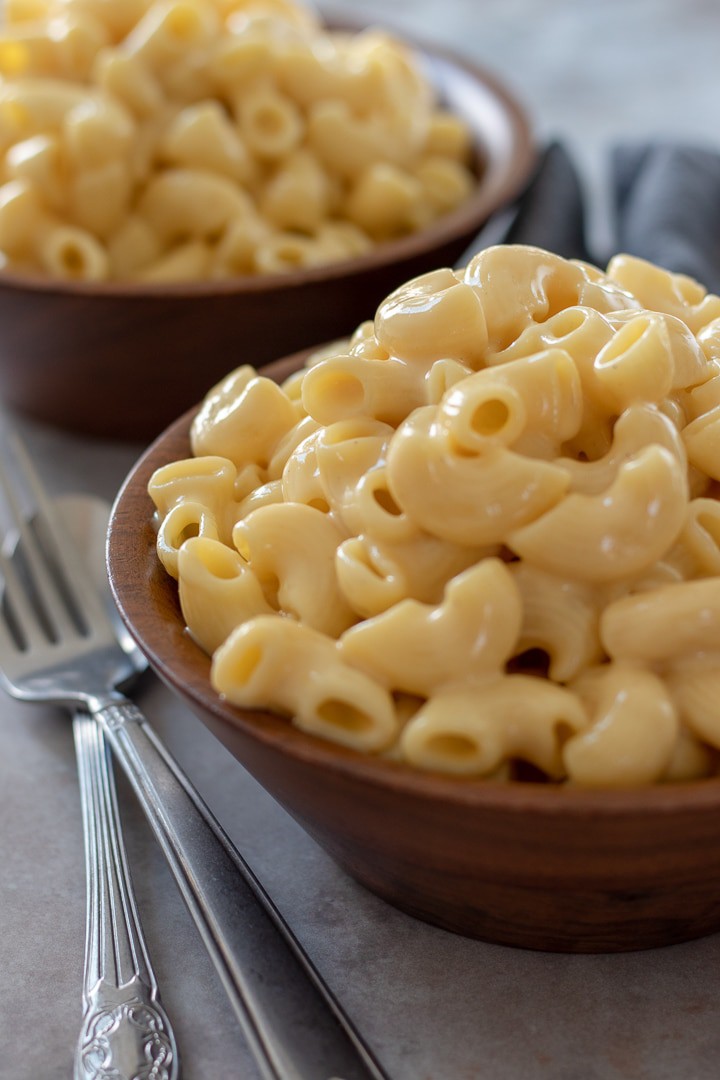 My Favorite Vegan Cheese Brands for this Mac and Cheese Recipe

After being inspired by Timothy to add store-bought cheese slices to my sauce, I experimented with a few combinations and found my favorite. I really love using one package of Violife Smoked Provolone and one package of Field Roast Chao Original. I was already a big fan of both of these. In fact, when I'm in the mood for a splurge, Violife's slices are a go-to (plus, where I shop they cost less than Chao). But if you can't find one or both of these, Follow Your Heart's slices are also great; try their Provolone or Smoked Gouda for this recipe.

I decided to use one package of smoked cheese because it adds a little something extra in the savory/umami department without actually coming across as smoky. But if you're sensitive to or don't care for smokiness you can double up on the Chao Original OR use Violife's Mature Cheddar (this one is seriously yummy, and I've used it in this recipe several times). For a traditional mac and cheese vibe just make sure you steer clear of any flavored varieties like Chao's Tomato Cayenne or Garden Herb.

Oh! I got sidetracked and didn't finish telling you about the cookoff. Well, I won, and based on the words of the announcer, "by a long shot." I'm only telling you this because I want you to know exactly how well this mac and cheese was received. Strangers were coming up to me during the event (even though entries were supposed to be anonymous, some people saw entrants arriving and knew which dishes belonged to which person), telling me with utmost seriousness that they needed the recipe. People told me everyone was talking about the "Grownup Stovetop Mac and Greens" and that they thought it would win.

I was blown away! I mean, I felt pretty confident about the recipe going in but honestly didn't know what to expect. Of course, I told everyone who asked for the recipe about my blog and that I would be sharing it here soon (I emailed the recipe to one person, too). After the winners were announced strangers continued to approach me and tell me how amazing the mac and cheese was. Seriously, blown away! Now I have eleven months to figure out how to win again next year. 😉 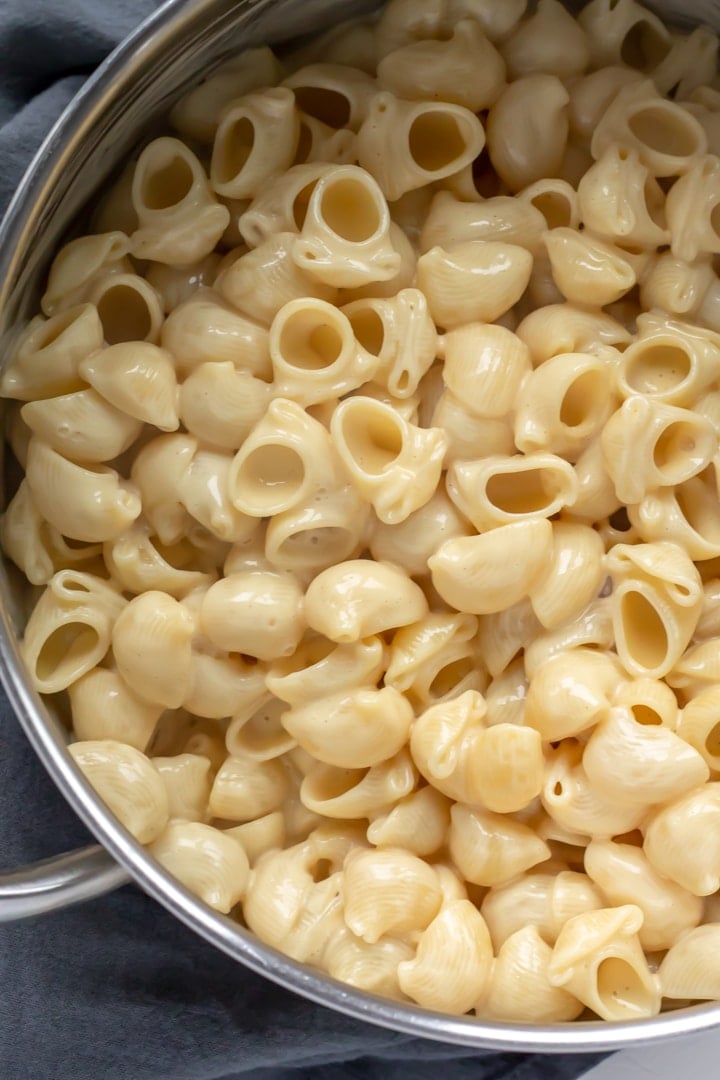 Different shells, different day. See how milky and impossibly creamy that sauce is?

This is just a summary. Be sure to scroll down for the full recipe.

I also like to add one bunch of sautéed lacinato (dino) kale. The only reason it's not pictured here is because the kale available at the store the day I shopped for this post looked terribly sad. So I decided to carry on without it and give you the option for a pure, straight-up mac and cheese with instructions on how and when to add the kale if you choose. 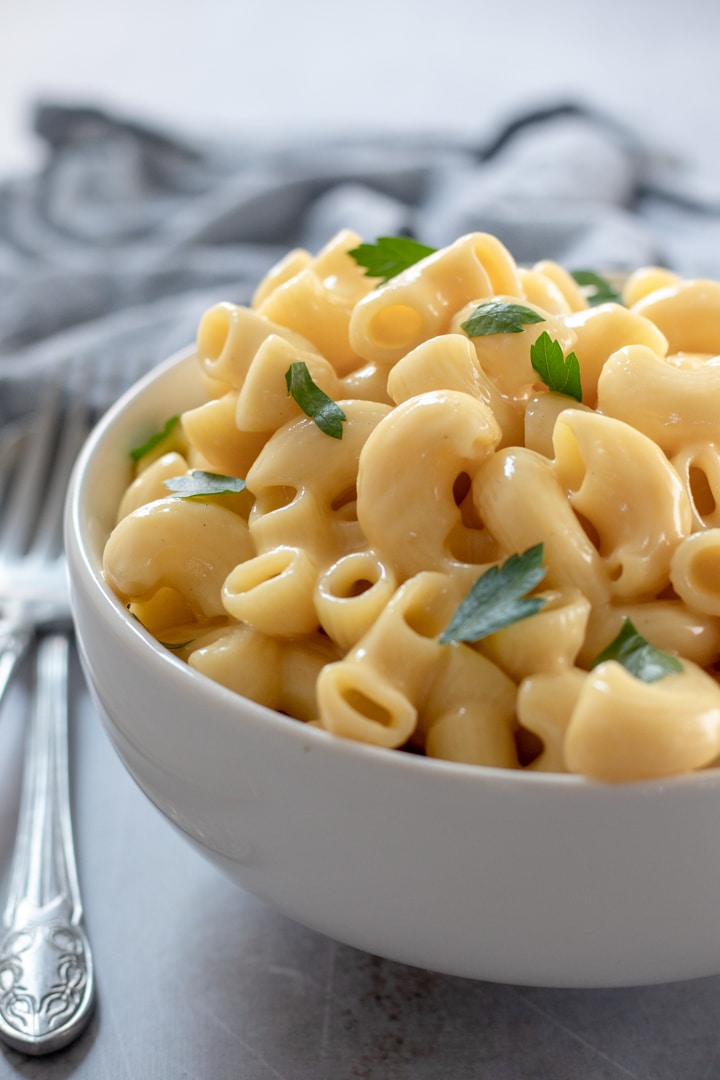 I hope you have a store near you that carries Violife, Field Roast and/or Follow Your Heart cheeses, but if you don't, stay tuned! I plan to test other brands and let you know about substitutions. And if YOU try other cheeses, please let us know in the comments below. I would love to hear how it works out for you.

Cheers to the creamiest, cheesiest, and best vegan mac and cheese. I hope you love it!

The Best Vegan Mac and Cheese

I haven't tested this recipe in a regular blender but it should work. In that case I recommend soaking the cashews overnight. If using a high speed blender, no need to soak. Store leftovers in an airtight container in the refrigerator for up to 4 days. Recipe inspired by Mississippi Vegan's White Truffle Mac and Cheese.
Nutrition Facts
The Best Vegan Mac and Cheese
Amount Per Serving
Calories 450 Calories from Fat 180
% Daily Value*
Fat 20g31%
Saturated Fat 11g55%
Cholesterol 0mg0%
Sodium 710mg30%
Carbohydrates 55g18%
Fiber 3g12%
Sugar 2g2%
Protein 10g20%
Vitamin A 0IU0%
Vitamin C 1.7mg2%
Calcium 20mg2%
Iron 1.4mg8%
* Percent Daily Values are based on a 2000 calorie diet.
Did you try the recipe?Let me know with a star rating and a comment. I love hearing from you!
Previous Post: « Vegan Chocolate Cake With Raspberry Cream Cheese Frosting
Next Post: Vegan Jalapeno Cornbread Muffins »

New recipes in your inbox...

Affiliate Program Participation:
I use affiliate links on the Resources page of this website and occasionally in individual posts. If you click through these links and make a purchase, I may receive a commission at no additional cost to you.