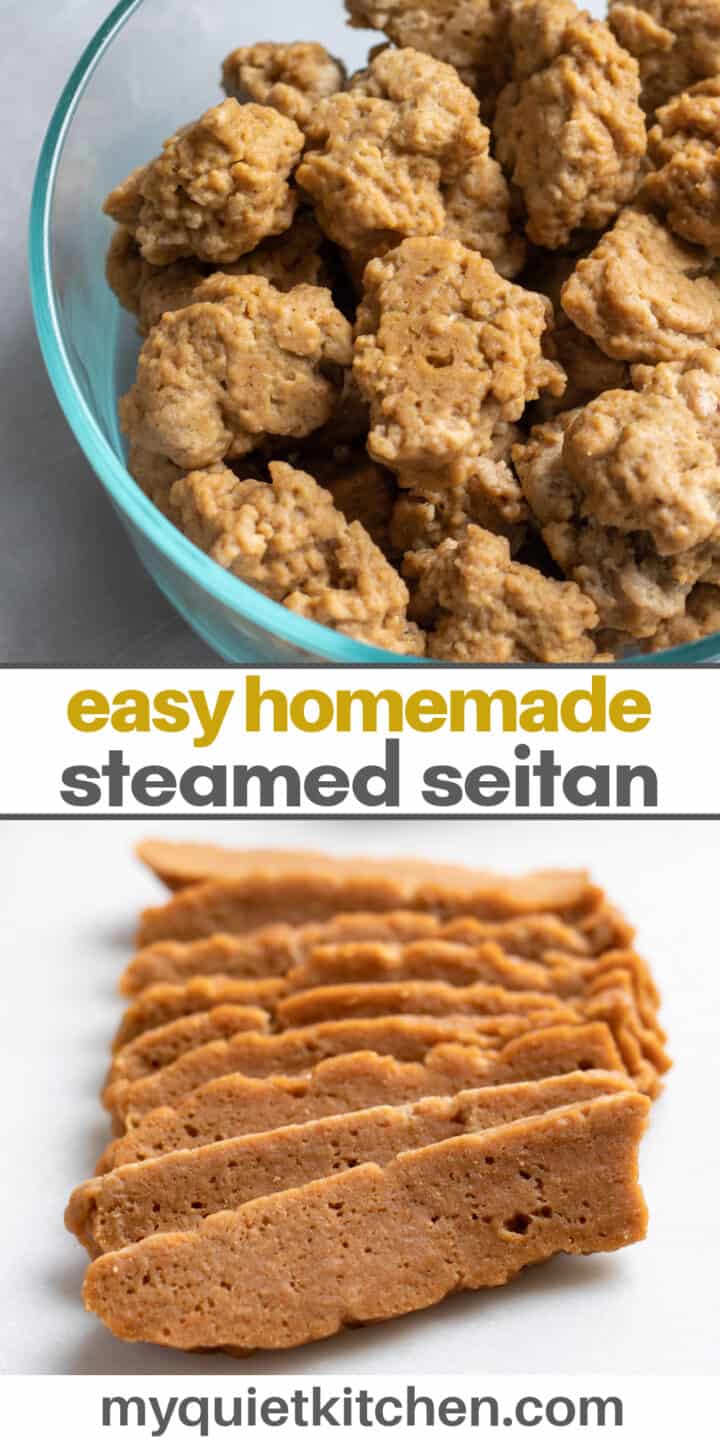 This basic seitan recipe is made with vital wheat gluten and lightly seasoned for use in a wide variety of dishes. It's easy to prepare and so much more affordable than store-bought! Slice seitan for sandwiches and wraps, crumble it for tacos and pizza, and tear into chunks for dishes like Seitan Bourguignon.

Seitan (pronounced "say-tan") is a high-protein, low-fat meat substitute made from gluten, the main protein found in wheat. This is why seitan is often referred to as "wheat meat."

Seitan is extremely versatile and can take on any seasonings, spices, and flavors you want to add. It can also be formed into a variety of shapes, like meatballs, roasts, burgers, jerky, steaks, and nuggets.

Seitan can be made with vital wheat gluten or using the original method of washing wheat flour.

While people all over social media are having their minds blown by the meaty result of washing wheat flour, vegans everywhere are like, "See?! We've been trying to tell you for years how awesome this stuff is!"

Some people prefer to do the washing process themselves, but thankfully, it's easy to find vital what gluten in stores, which makes homemade seitan much easier and more accessible for folks who don't have a lot of time.

Starting with vital wheat gluten also makes it easy to build a lot of flavor into seitan, like these vegan chorizo and vegan pepperoni recipes!

Where did seitan originate?

Vegetarian Buddhists were enjoying wheat gluten as far back as the 6th century. The process is thought to have either been developed by Buddhist monks or by chefs who prepared food for Chinese emperors during their annual, week-long observation of vegetarianism.

So while the word "gluten" has taken on a negative connotation in today's world, it's really not a strange food at all. Though it should certainly be avoided by anyone with Celiac disease or gluten sensitivity.

If you haven't ventured into making seitan yet don't be intimidated! This recipe will show you how to make a basic seitan using vital wheat gluten.

While I love the pre-made seitan products available in stores, the added convenience can get expensive very quickly, especially if you're feeding a family. With costs ranging from $6 to $8 per 4-serving package, that puts this versatile plant-based protein out of reach for a lot of people.

Yes! To give you an idea of how much money you can save by making your own seitan, here's a quick overview. I'll use Bob's Red Mill vital wheat gluten in this example since it's the brand you're most likely to see in stores here in the US.

At our local Ingles (a North Carolina-based grocery chain) I can buy a 22 ounce bag of vital wheat gluten for around $7.50. You'll also find it online from sites like Amazon, Thrive Market, and Vitacost for anywhere from $5.50 to $8.

That 22 ounce bag will make FIVE batches of the recipe I'm sharing today, which equates to 5 pounds of cooked seitan!

Even after factoring in the costs of the other ingredients, you can see how much more affordable it is to make your own seitan.

TIP! Be sure to keep an eye out for sales because you never know when you'll come across a big jackpot. At a local discount grocery we regularly see vital wheat gluten on sale for $2.99 a bag.

When you have an opportunity to stock up, store the extra vital wheat gluten in the freezer to extend its shelf life.

How To Make Seitan

Be sure to watch the video below to see the recipe come to life!

After chilling overnight, the seitan will be even meatier and firmer.

Most basic seitan recipes call for simmering, and honestly, that's how I cooked it for many years. But I've become a big fan of steaming seitan for a few reasons.

In the photo below you can see a previous batch that was simmered. Another issue with simmering that often trips people up is keeping the simmer low enough.

If the seitan boils, it will get puffy and lose some of the desirable, dense, and meaty texture.

Chicken-style seitan (pictured below) - omit the smoked paprika and onion powder, and add 1 teaspoon of poultry seasoning blend. If desired, instead of forming the dough into steaks simply tear it into nuggets.

RELATED: If you're a fan of seitan chicken, don't miss this NEW recipe, Easy Seitan Nuggets! They're fantastic plain, or follow the recipe for crispy breaded nuggets.

How to Season Seitan

The seasonings in this recipe are meant to be neutral and versatile. I wanted to create a basic seitan that's flavorful enough to stand on its own but not SO strongly seasoned that it can't transition into something else, like an Asian stir fry or our favorite fancy dinner Seitan Bourguignon.

I didn't necessarily try to replicate the flavor of Westsoy's seitan, but making a product similar to that is what I had in mind with this recipe.

The inspiration came after a friend was disappointed with her first batch of homemade seitan. She had followed the recipe on the side of the Bob's Red Mill bag and wasn't impressed!

So I started thinking about the likelihood that many people's first experience with homemade seitan is probably with that same recipe, and how different that is from pre-cooked, store-bought seitan.

That's when I decided to create a basic seitan recipe that's not quite SO basic, if you know what I mean. None of the seasonings in this recipe prevent you from being able to take it in different directions, like Asian, Italian, or Mexican dishes.

And if you want to add spiciness or something like a poultry seasoning blend, go for it! The one major thing to consider is the amount of salt. Keep the final dish in mind.

If you plan to eat the seitan as is, you'll want to include a bit more salt (as described in the recipe). But if you plan to use it in a dish that includes a salty sauce, reduce the amount of salt in the dough. Make sense?

Ways to Use Seitan

Slice the seitan for sandwiches, wraps, and salads.

Use a food processor to pulse the cooked seitan into a ground texture. Add it to taco bowls and burritos and sprinkle it on pizza.

And check out this Vegan Thai Larb recipe using crumbled seitan. It's an excellent appetizer and dinner party recipe!

And here's an idea for a quick weeknight veggie saute:

Store cooked seitan in an airtight container in the refrigerator for up to 5 days. Seitan can also be frozen for up to 2 months.

I hope you enjoy this easy seitan recipe as much as we do! If you try it be sure to leave a comment and star rating below to let us know. ⭐️⭐️⭐️⭐️⭐️

Author: Lori Rasmussen, My Quiet Kitchen
This simple seitan recipe is as flavorful as store-bought seitan but more affordable! It's perfect for any recipe that calls for pre-cooked seitan. Seitan can be sliced, crumbled or cubed and used in everything from sandwiches to stir fries.Instructions included for two different cooking methods, steaming and simmering.Yield: 1 pound of seitan (serves 4-5)
Servings: 5 servings
4.88 from 25 votes
Print Recipe Pin Recipe
Prep Time: 15 mins
Cook Time: 35 mins
Total Time: 50 mins

Instructions for simmering (instead of steaming): Fill a stock pot about half full with water, and add ¼ cup soy sauce. Bring to a boil, then reduce to a simmer. Carefully place the pieces of dough into the simmering water. Place a lid on the pot slightly askew to allow steam to escape. Adjust heat if necessary to maintain a low simmer. Watch the pot for the first few minutes, to make sure it doesn't start to boil. Cook steaks for 50 minutes to 1 hour (smaller chunks/nuggets may be done after about 45 minutes). Squeeze with tongs; the seitan will feel very firm when done. You can also cut through the center of a piece to check for doneness.  When the seitan is firm and fully cooked through, turn off the heat. Allow seitan to sit in the pot for about 10 minutes, then transfer to a plate to cool.
Storage Store cooked seitan in an airtight container in the refrigerator for up to 5 days. Seitan can also be frozen for up to one month.