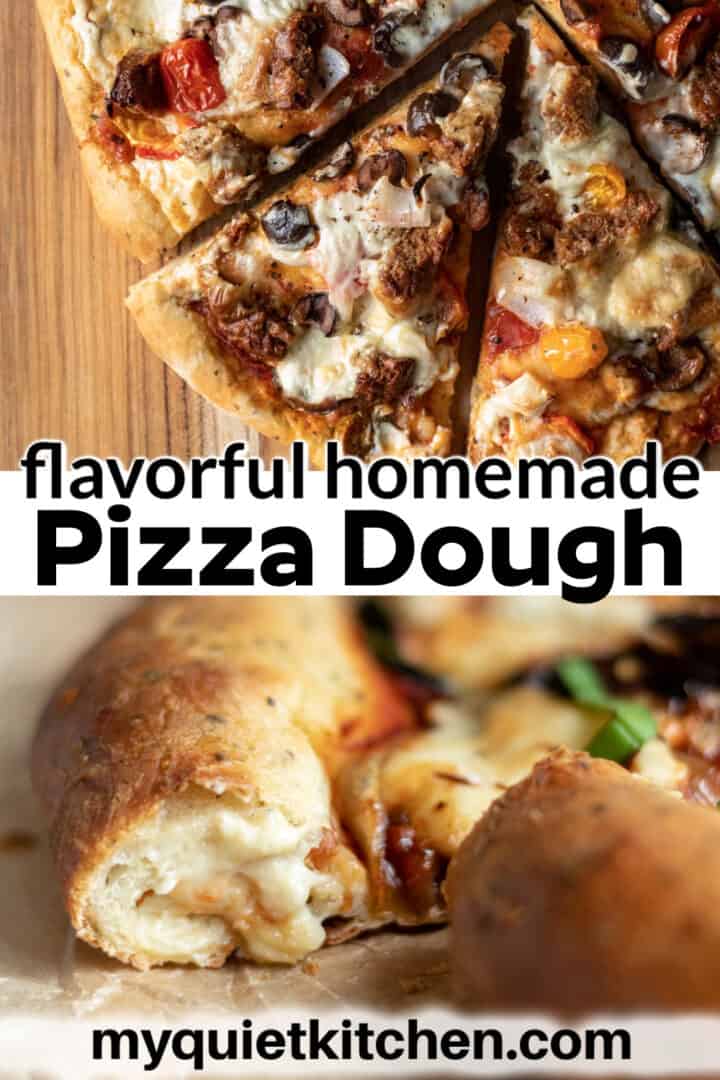 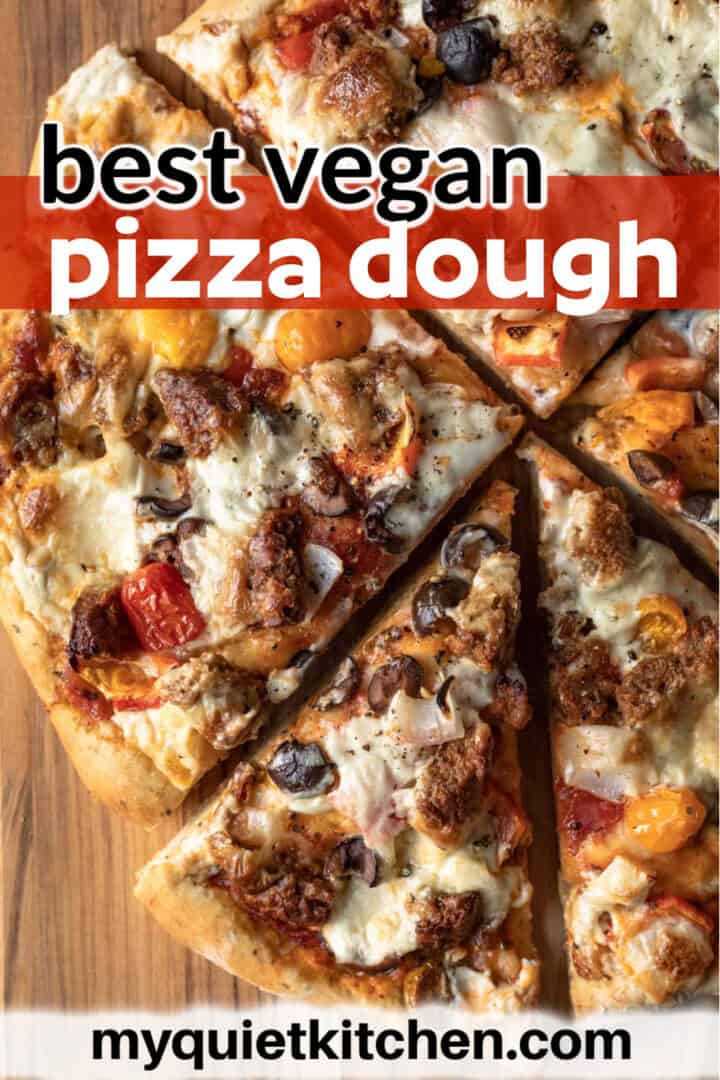 Our favorite vegan pizza dough is lightly seasoned with dried herbs and garlic and bakes up to crispy, chewy perfection! Ready in just over an hour, this flavorful pizza crust is guaranteed to take your homemade pizzas to the next level!

Why You'll Love It

A version of this herb seasoned pizza dough recipe has lived on the blog for a few years now, originally as part of this vegan stuffed crust pizza.

Recently after making the vegan sausage pizza you see above, I was reminded how amazing this pizza crust really is and decided it deserves its own post!

My husband and I don't dine out (or order in) very often, but earlier this year we dabbled with Door Dash a few times, including ordering from a higher-end pizza chain.

And while the convenience was nice on really busy or tired days, the pizza crust was seriously disappointing - think limp, soggy, and bland.

So after a few occasions of spending WAY too much money on disappointing pizza, I finally learned my lesson and have vowed to never order pizza again!

Sure, homemade pizza dough takes a little more planning, but it's not like it's difficult. It's made with pantry staple ingredients and ready in just over an hour, and most of that is hands off!

And the result is SO much better. Because when you want pizza, you want PIZZA! - not disappointment. Know what I mean?

All you need are 3 primary ingredients plus a few dried herbs...

See the recipe card below for quantities and full instructions.

Here's a quick visual overview of the steps of making pizza dough.

Preheat the oven to 500 degrees Fahrenheit. A pizza stone dramatically improves the quality of the pizza crust, and I highly recommend using one. Be sure to place the stone in the oven prior to preheating.

I find pizzas tend to bake more quickly on a metal pizza pan than on a stone, and burn more easily, too. So keep a close eye on the crust during the last few minutes.

Over the years we've tried all kinds of unique vegan pizza toppings, like creamed corn sauce with chorizo, ricotta and fennel, and Korean BBQ sauce with tofu and mushrooms.

But the pizza pictured here was honestly one of the BEST vegan pizzas we've ever had! Here's what's on it:

Serve this pizza to your meat-loving friend, dad, roommate, or whoever. They won't even know they're eating vegan pizza!

I'm pretty picky when it comes to vegan cheese. My go-to is this homemade cashew mozzarella. I like that it's ridiculously quick and easy to make, healthier than store-bought options, and seriously cheesy, gooey, and delicious!

Vegan cheeses vary in flavor and melting characteristics. So it doesn't hurt to try a few to find your favorite.

Can I prep pizza dough in advance?

Absolutely. Prepare the dough through step 4 (kneading), but instead of placing in a warm environment, place the dough in the refrigerator for 8 to 12 hours (make sure the bowl is tightly covered with plastic wrap. An overnight proofing actually gives pizza dough even better flavor.

Let the dough sit at room temperature for 30 to 45 minutes before shaping.

Prepare the dough through step 5, allowing it to rise, then divide in half (or leave whole). Place the ball(s) of dough in freezer bags, squeeze out the air, and freeze for up to 3 months.

Thaw pizza dough in the refrigerator overnight, and let sit at room temperature for 30 minutes to an hour before shaping.

Kitchen scales are inexpensive, easy to use, and the best way to make sure you use the correct amount of flour in any recipe.

A pizza stone will transform your homemade pizza from good to great! One that is around 14 inches in diameter is easy to handle and can accommodate most pizzas.

A pizza peel makes it easy to slide the pizza onto and off of the hot stone.

Why would pizza dough not be vegan?

Though most classic pizza dough recipes are vegan, some include dairy in the form of cheese or yogurt. When dining out or shopping for pre-made pizza crusts, keep in mind that gluten-free pizza crusts are rarely vegan since eggs are often included for binding.

Double zero flour, or 00 flour, is an extra fine flour from Italy and considered the best flour for pizza dough. The numbers refer to the grind, with 00 being finest and 2 the most coarse. The higher protein content of 00 flour is more similar to bread flour than all-purpose. It creates a chewy inside and crispy outside, especially when cooked in high temperatures.

Accidentally using too much or too little flour is sure to mess up almost any baking recipe! Using an inexpensive kitchen scale is simple and helps ensure consistent results every time.

In the recipe below, tap on "Metric" to see the flour weight in grams (370 grams as original recipe is written).

If not using a scale, it's important to properly measure the flour. To do this, first whisk the flour to fluff it up. Then lightly scoop with a measuring cup, and level off the top.

I hope you enjoy this flavorful vegan pizza crust as much as we do! If you try the recipe be sure to comment below and let us know.

*I highly recommend weighing the flour with a kitchen scale. Otherwise, be sure to whisk the flour before measuring with measuring cups. After whisking, lightly scoop up, then level off the excess. Make in Advance Prepare the dough through step 4 (kneading), but instead of placing in a warm environment, place the dough in the refrigerator for 8 to 12 hours (make sure the bowl is tightly covered with plastic wrap. An overnight proofing actually improves the flavor! Let the dough sit at room temperature for 30 to 45 minutes before shaping. To Freeze Prepare the dough through step 5, allowing it to rise, then divide in half if desired. Place the balls of dough in freezer bags, squeeze out the air, and freeze for up to 3 months. Thaw pizza dough in the refrigerator overnight, and let sit at room temperature for 30 minutes to an hour before shaping.