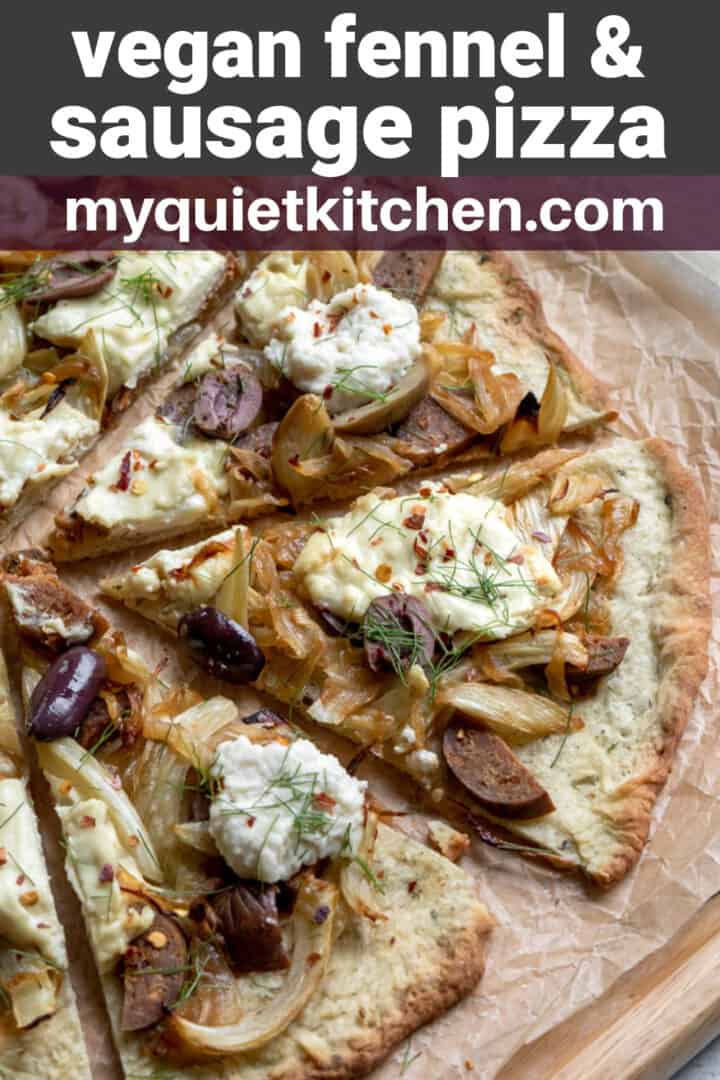 Here's a unique vegan pizza idea! Imagine caramelized fennel, onion, garlic, vegan sausage, and 2 types of vegan cheese atop a fennel seed-infused crust. With dairy-free ricotta and mozzarella plus briny olives, you won't miss the tomatoes or dairy on this flavorful pie.

This recipe was originally posted in October 2019 and has been updated with new photos and instructions.

A few months ago I was brainstorming ways to use vegan ricotta, and I came across a Cooking Light recipe for sausage, fennel and ricotta pizza.

Though their recipe isn't vegan, the idea of a caramelized fennel pizza has been on my mind ever since.

The last pizza recipe I shared, Pesto Stuffed Crust Pizza, was a celebration of summer's abundance of fresh basil.

Now that fennel season is here, I figured it's a great time to share this vegan interpretation of fennel and ricotta pizza!

I love the idea of pairing a mild-tasting, creamy ricotta with the sweetness of caramelized onion and fennel. And since I already have a tried and true almond ricotta recipe on the blog, that was an easy decision!

There's also this tofu-based vegan ricotta if you prefer something lighter and with more protein.

For a flavor boost, I added a few cloves of sautéed garlic to the food processor while blending up the ricotta. I highly, highly recommend this step!

The tofu ricotta comes together in a bowl, no food processor needed.

I also included a bit of cashew mozzarella on the pizza. This is another easy, quick, go-to cheese recipe that we enjoy frequently. It melts beautifully and is lower in fat than store-bought cheeses.

Another option is to use your favorite store-bought vegan cheese. You can opt for pre-shredded, or buy a block and shred it yourself.

You can even use pre-sliced cheeses like Violife's smoked provolone or Chao creamy original, and shred those with a box grater.

TIP! Shredding cheese yourself usually leads to a more attractive melt since the pre-shredded ones are coated with anti-caking agents.

How to Make Fennel-Infused Pizza Dough

If you plan to make your own dough, this little trick adds really nice fennel flavor throughout the crust...plus, it's so simple!

Using a mortar and pestle or a spice grinder, roughly grind one teaspoon of fennel seeds. They don't have to be broken down into powder, just broken up a bit.

Whisk them into the flour along with the salt, before adding the yeast/water mixture. You can do this with any pizza dough recipe. I followed my Herb Crust recipe, omitting the oregano and basil.

The pizza dough recipe I linked to above makes enough for one 12-inch stuffed crust pizza (which you don't need for this recipe, although you could certainly do that if you want to!) OR two thin crust pizzas.

So you can either divide the dough ingredients in half to make one fennel pizza, or make the full batch of dough, and save half of it for another day. Wrapped well, pizza dough will keep in the refrigerator for up to one week.

Now that you have a plan in place for the dough and cheese(s), you're ready to caramelize the fennel and onion.

Thinly slice both of them, about ¼ to ⅓-inch wide. After pre-heating the pan, add a tablespoon of oil. Fennel takes a little longer to cook than the onion, so add the fennel to the pan first, giving it about a 5 minute head start.

It should take about 30 minutes for both the fennel and onion to get nicely tender (though a bit of crunch is completely fine) and lightly browned. They'll have a chance to cook more in the oven!

I think you're going to love the flavors of this pizza! And if you're concerned the fennel will be too overpowering, don't worry! It's actually fairly mellow and blends beautifully with the onion, sausage, cheese, and briny olives.

In fact, this is pizza is SO good, my husband and I ate it twice last weekend and both decided it's quite possibly our new favorite!

I hope you enjoy this vegan pizza with ricotta and fennal! If you try the recipe I would love to hear from you. Comment below and tag me in a photo on facebook or instagram with @myquietkitchen! 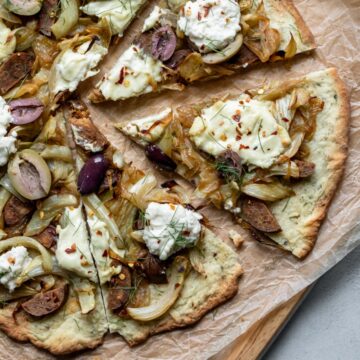 Find the tofu ricotta recipe here. Fennel-Infused Pizza Dough Use the Herb Crust recipe from my Vegan Stuffed Crust Pizza with the following considerations:  Store leftover pizza in the fridge for up to 5 days. Can also be frozen.