This vegan pesto pizza is the best of all worlds, with a homemade stuffed crust, tangy marinara, thinly sliced potato, and fresh basil pesto! Inspired by our Vegan Stuffed Crust Pizza, today's recipe is a fun spin you'll definitely want to try on your next pizza night.

Just like our other stuffed crust pizza recipe, this one features a homemade herb crust, quick and easy vegan mozzarella, and tangy marinara.

If you've never had potato on pizza, trust me, you're in for a treat!

As we head into summer I love looking for new ways to enjoy fresh herbs, and pesto is always a slam dunk.

Because pesto is at its best when raw, we're going to add most of the pesto to our pizza after it comes out of the oven, though a small amount does go into the stuffed crust along with the vegan cheese. Speaking of cheese....

If you haven't made your own melty cashew mozzarella yet, get ready for your life to change! You won't believe how easy it is to make cheese that melts beautifully and tastes irresistible.

In my mind, this cheese borders on magical. I mean, it's essentially instant gratification! In less time than it would take to drive to the store and buy shredded vegan cheese, you can have this prepped and ready for your pizza.

So if you're new to making vegan cheese at home, you may want to head over to that post and read up on a few more details about it, including the ingredients that make it so awesome

Have you ever had potato on pizza? I realize that might be a new idea for some people, while others have been eating potato pizza their whole lives.

Potato pizza is a classic Italian dish, though we're not exactly trying to replicate that version here. Mainly I used the idea as inspiration and justification to use up two Yukon Gold potatoes I had lying around.

Potatoes and pesto are a delicious combination. Truthfully, there's something so very satisfying about biting into a warm and creamy slice of potato and the way it contrasts with the chewy crust.

Any veggies that pair well with pesto will be right at home on this pizza. Feel free to add your favorites like onion, mushrooms, peppers, broccoli, and spinach or arugula.

There are a few steps involved in making vegan pizza dreams come true, especially if you choose to make each element from scratch. So let's walk through the basic order of things so that your next pizza night will go as smoothly as possible!

I hope you're hungry now and as excited about this Vegan Potato and Pesto Pizza as I am! If you give it a try I would love to hear from you.

Your feedback is always helpful. If you try the recipe be sure to leave a star rating and comment below to let us know! 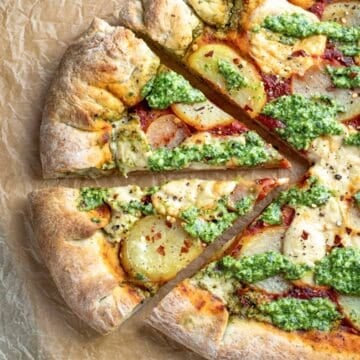 Assemble and bake the pizza:

Store leftover pizza in an airtight container in the refrigerator for up to 4 days.