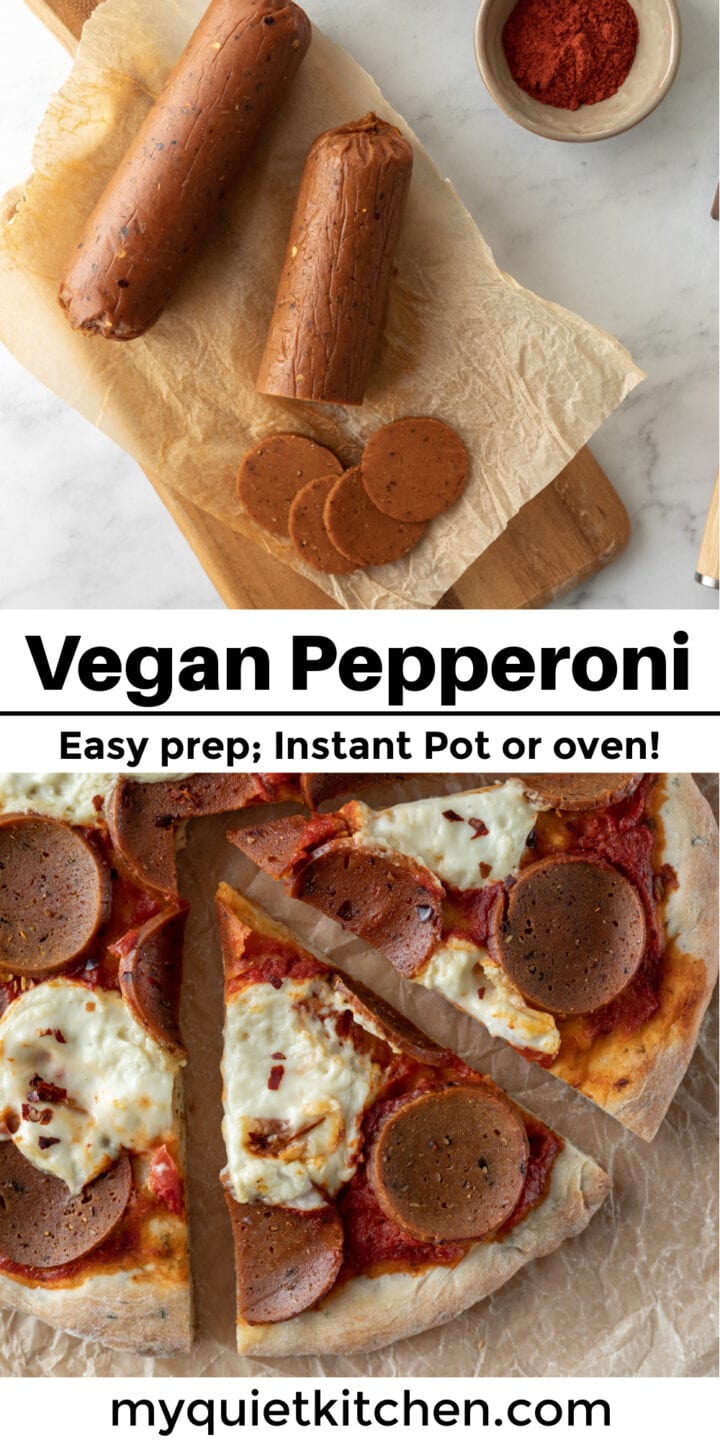 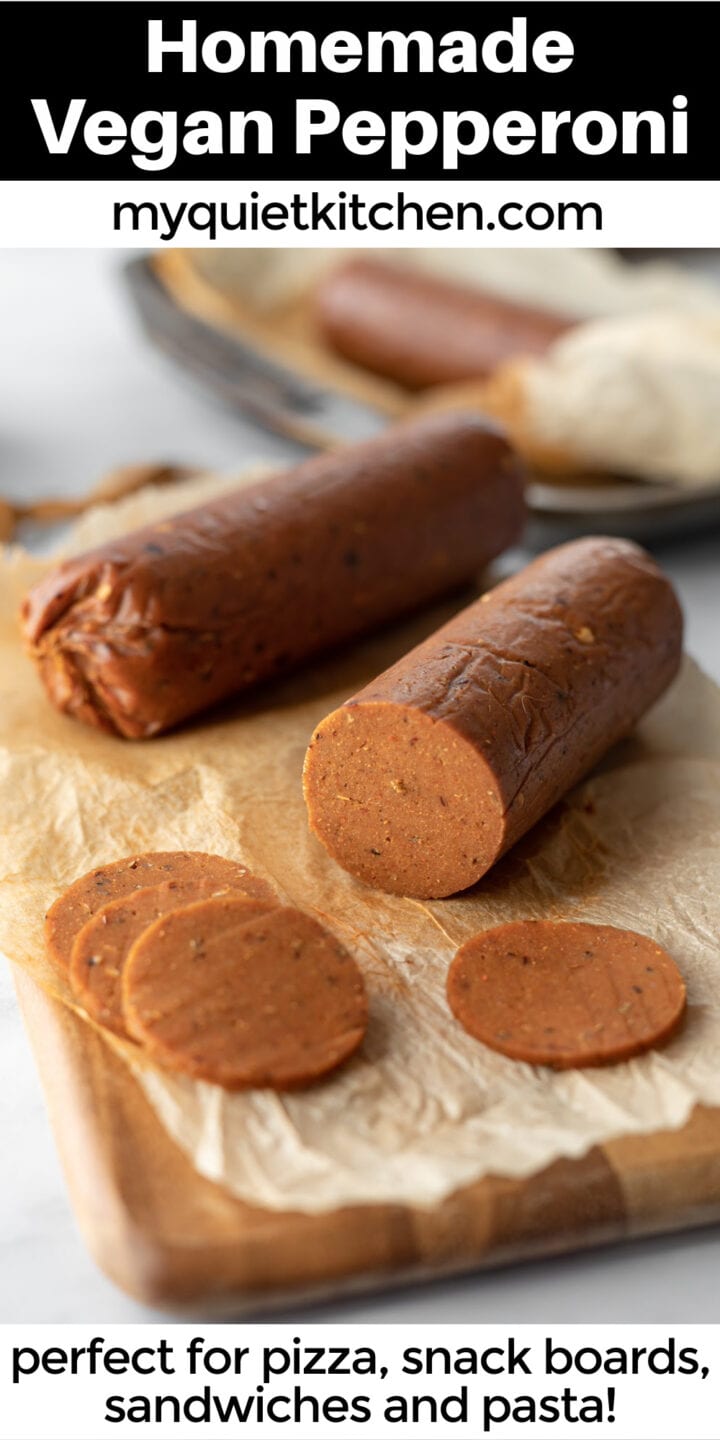 Vegan pepperoni is easy to make at home and tastes so good you'll find yourself snacking on it straight from the fridge! Flavorful and generously spiced with paprika, fennel seed, garlic and just enough spicy heat. Of course, this seitan pepperoni also makes amazing vegan pepperoni pizza, snack boards, and sandwiches.

Why You'll Love It

If you love the over-the-top flavor of pepperoni you're going to LOVE this seitan version. I worked hard to get the flavor profile just right and am totally in love with the result.

With a tender and meaty texture plus paprika, fennel seeds, garlic, cayenne, and black pepper, the only things missing from this vegan pepperoni are cruelty and loads of fat!

We also love that it's seriously easy to prepare and can be used in so many different ways. Enjoy vegan pepperoni:

Whether you eat this vegan pepperoni cold or hot, the flavor and texture are just so satisfying.

The ingredient list may look long at first glance, but it's mostly just spices. Otherwise, you'll need just a few dry ingredients and other flavorings.

How To Make Vegan Pepperoni

Of all of my seitan recipes, this one might be the easiest. The dough can be made in a food processor or by hand in a mixing bowl. And the pepperoni can be steamed in the Instant Pot or baked in the oven.

Here's a quick step-by-step look at the process. Be sure to scroll down for the full recipe.

Add 1 cup of water to the Instant Pot, and place the trivet inside. Place the foil packages on the trivet. Secure the Instant Pot lid. Using the steam function, cook for 30 minutes, followed by a quick release of the pressure.

Place the foil packages on a baking sheet, and bake in a preheated 325 degree oven for 55 minutes, flipping them at the halfway point.

Healthy is a fairly subjective term, but I will say this, compared to pepperoni made from a pig's flesh that's loaded with sodium and nitrates? Yeah, this is healthy.

Is there a gluten-free option?

Because this is a seitan-based recipe it is the exact opposite of gluten-free, but you can always use these spices and seasonings on tofu, tempeh, or soy curls for a gluten-free treat with similar flavor.

No, seitan pepperoni is not greasy. The amount of fat you can add to seitan is limited because it interrupts the formation of gluten. So adding too much oil makes seitan fall apart. This means that seitan pepperoni is lower in fat and also more dry. See the next question for an important tip!

Can I use it on pizza?

Absolutely! To prevent the seitan pepperoni from drying out in the oven be sure to marinate the pepperoni slices in oil first, or simply spritz the pepperoni with oil once it's on the pizza. Alternatively, you can layer the pepperoni underneath the sauce.

The key to perfectly dense seitan pepperoni is to wrap it tightly. If the foil is somewhat loose, the seitan will expand during cooking to fill the foil package, and you may end up with bready looking holes in your pepperoni.

I highly recommend heavy-duty aluminum foil for this recipe. Also, the layer of parchment between the foil and seitan helps to reinforce it and make it even stronger. This allows you to wrap it snugly and really twist those ends closed.

As I mentioned above, the tasty ways to use vegan pepperoni are limited only by your imagination! Slice it, chop it, or pulse it in a food processor.

Enjoy vegan pepperoni straight from the fridge or in hot recipes like lasagna or cheesy pasta bakes. We also really love it on salads, snack boards, pizza, and sandwiches!

If you try the recipe I would love to hear from you! Comment below to let us know how you enjoy using vegan pepperoni. 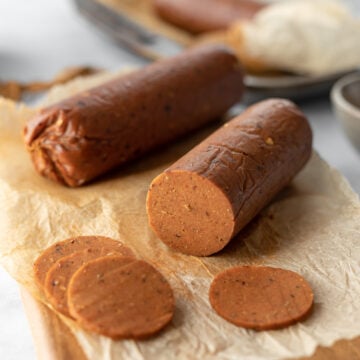 *The fennel seeds don't need to be powdered, just broken up a bit. Easy ways to do this are with a mortar and pestle or in a coffee/spice grinder.

Before using the pepperoni on pizza, marinate the slices in a bit of oil to keep them from drying out during baking. You can also spritz them with oil after adding to the pizza, but marinating is best.

Store the pepperoni in an airtight container in the refrigerator for up to 6 days. It's also freezer friendly. Wrap well to protect from freezer burn. Thaw in the fridge overnight before using.

Did you try the recipe?I LOVE hearing from you! Comment below to let us know.

The base of this vegan pepperoni is seitan, or wheat gluten. Did you know that vegetarian Buddhists were enjoying wheat gluten as far back as the 6th century? It's true! The process is thought to have either been developed by Buddhist monks or by chefs who prepared food for Chinese emperors during their annual, week-long observation of vegetarianism.

So while the word "gluten" has taken on a negative connotation in today's world, it's really not a strange food at all (though it should certainly be avoided by anyone with Celiac disease or gluten sensitivity).

Seitan is made by washing wheat flour under water until all of the starches have washed away, leaving behind the protein. In fact, there was recently a viral TikTok video showing the "wash the flour" method.

While people all over social media are having their minds blown by the meaty result of washing wheat flour, vegans everywhere are like, "Umm helloooo, this is seitan, y'all. We've been telling you for years how awesome this stuff is!"

Some people still prefer to do the washing process themselves, but thankfully, it's now easy to find dried vital what gluten in stores, which makes homemade seitan much easier.

Starting with vital wheat gluten also makes it possible to build a lot of flavor into the dough, like we're doing with this seitan pepperoni.