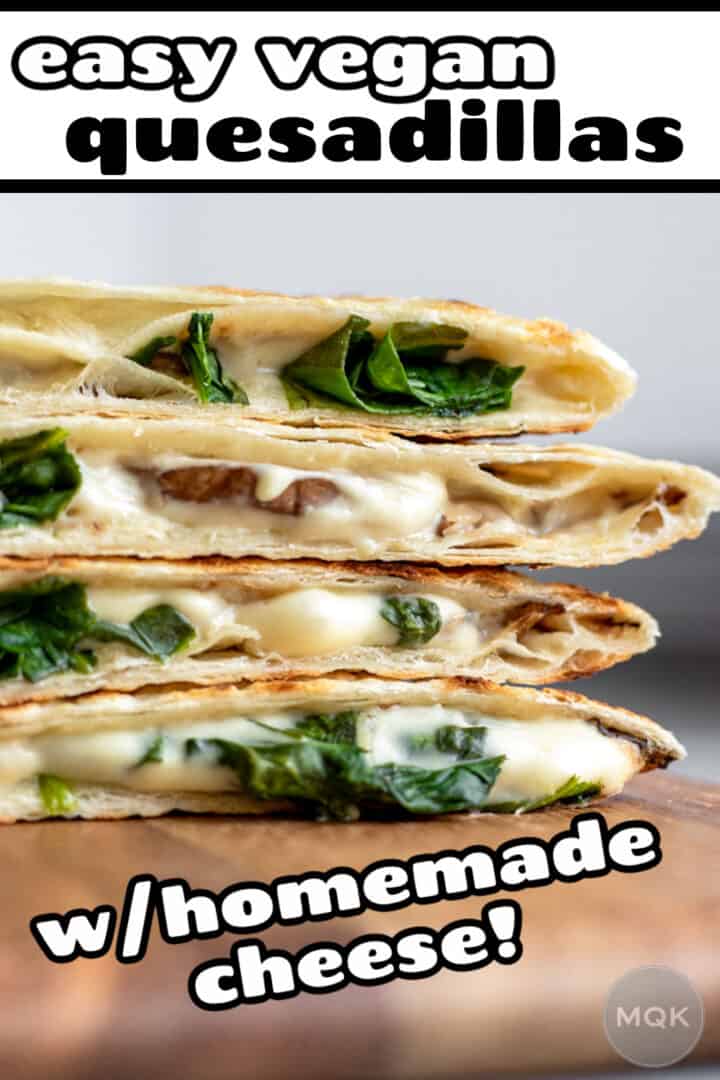 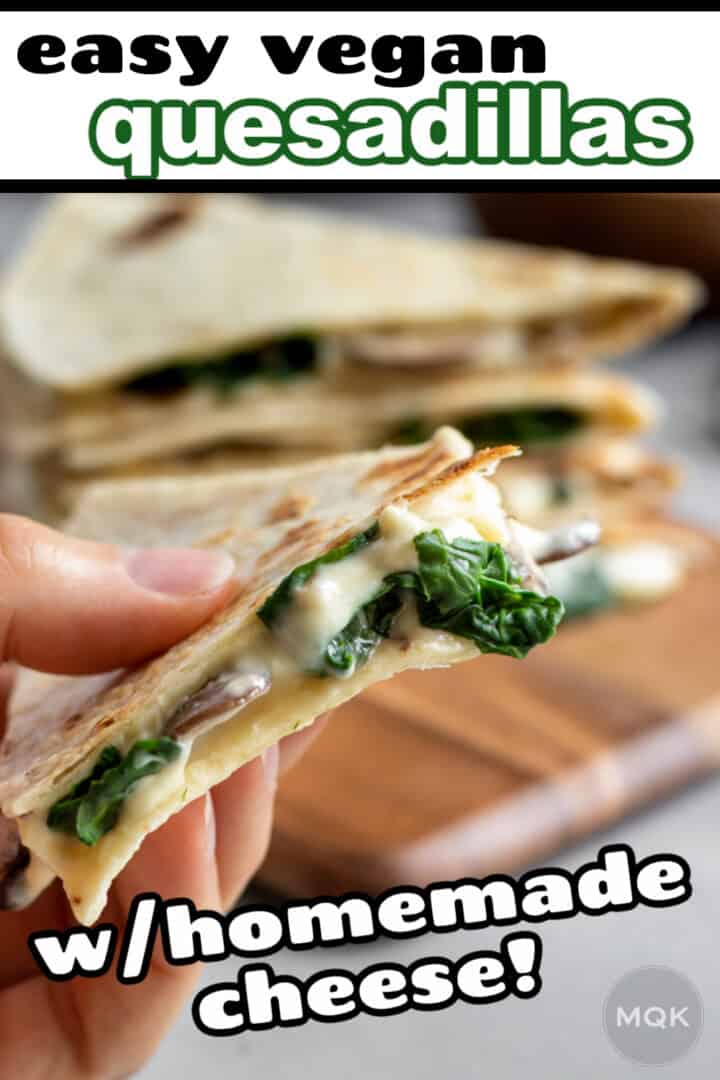 Make delicious vegan quesadillas at home in no time! They're cheesy, crisp, comforting, and made with simple ingredients. All you need are tortillas, meltable mozzarella cheese, and a few veggies. Easily customize your vegan quesadilla with a variety of veggies, herbs, and more. Enjoyed by kids and adults alike!

This recipe was originally published in October 2019 and has been updated with new photos and content.

Why We Love this Recipe

These vegan quesadillas use a simple and light, meltable homemade vegan cheese that I adapted from the mozzarella recipe in my favorite Stuffed Crust Pizza. The fat in this cheese comes from just ⅓ cup raw cashews. You can make it richer and include oil in the cheese if you like, but it's totally optional.

Not only does this homemade cashew cheese taste better than store-bought, it only takes a few minutes to make. Oh, and there's a nut-free option, too! Imagine, an oil-free, allergy-friendly, low-calorie vegan cheese.... who would've thought?!

Lemon, salt, and nutritional yeast bring the cheesy vibes. And water + tapioca flour make it creamy and meltable. Honestly, if you haven't made a vegan cheese similar to this before, I think you'll be amazed how good it is.

Vegan quesadillas are super versatile, too! See the Ingredient Notes below for ideas.

See what I mean? Quesadillas don't have to be just another form of grilled cheese sandwich.

The only thing to consider when selecting your fillings is whether they need to be pre-cooked. A simple sauté only takes a few minutes, so this mushroom, spinach and garlic mixture really hits the spot!

How to Make a Vegan Quesadilla

First, prepare the cheese, which takes about 15 minutes. You'll need a blender and small saucepan. Next...

If you're including veggies in your quesadillas, you'll want to sauté them briefly. I chose cremini mushrooms, garlic, and spinach because I was in the mood for something super savory and full of umami.

Once your veggies are sauteed and any other ingredients are prepped, preheat a large skillet over medium-low heat.

Spread the hot cashew cheese on one side of a tortilla, spreading it almost all the way to the edges (see photo above). Place the tortilla in the pan, cheese-side up, and arrange sautéed veggies on one half.

Fold the other side of the tortilla over to cover the veggies. Continue to cook until the underside is nicely toasted. Flip and cook the other side until equally done.

Let the quesadilla cool for a few minutes, then slice into triangles. Garnish as desired and dig in!

Quesadillas are best eaten right out of the skillet when the tortillas are crisp and fragrant. There's really nothing better. I mean, just take a look at that cheese and the flaky tortillas!

Since gluten-free and whole-grain tortillas tend to be less flexible than traditional white flour tortillas, it's best to stack two tortillas instead of doing the fold over method. Like this:

Oh! And one more thing.... as you probably know, quesadillas are usually fried in oil, but honestly, you don't need it.

The tortillas get nice and toasty in a dry pan. I like to use a cast iron skillet, but a standard non-stick pan also works.

Using a tablespoon of oil to sauté the veggies and garlic does enhance the flavor (of the garlic especially). But I've also made this entire recipe without any oil at all, and they're still beyond delicious!

Here's the catch with quesadillas... they're not exactly make-ahead friendly. I mean, you can store leftovers in the fridge (IF you have any leftover that is), but just like pizza, grilled cheese, or biscuits, these vegan quesadillas are best enjoyed hot from the pan.

Reheat leftovers by microwaving for a few seconds to remove the chill, then place the quesadillas in a preheated pan. This will crisp up the tortillas and fully reheat the cheese.

Scoot the quesadilla to one side of the pan, and add a small splash of water to the other side. Quickly cover the pan, and allow the steam to assist with melting the cheese. Then remove the lid so that the tortillas can get crispy.

This trick is especially helpful when melting store-bought vegan cheese.

If you've never made quesadillas before, think of this as a basic guide, and have fun with different fillings, herbs and spices!

These healthy vegan quesadillas come together quickly and without much fuss, making them perfect for a cozy night in when you're in the mood for some comfort food. They're also an impressive vegan appetizer when entertaining friends!

I hope you enjoy the recipe as much as we do. If you try it I would love to hear from you! Be sure to comment below and tell us all about your scrumptious vegan quesadillas. 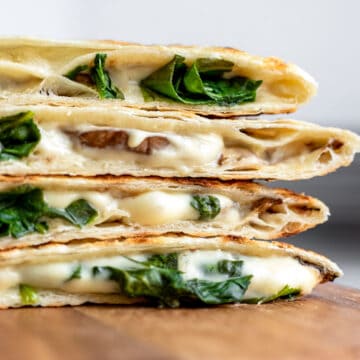 If using whole-grain or gluten-free tortillas: Since these are less flexible than traditional flour tortillas, instead of doing the fold over method, spread a layer of cheese and the filling ingredients over the entire surface of one tortilla. Then spread cheese on another tortilla and place it on top of the veggies, cheese-side down. Press it down so that the cheese holds the veggies in, and carefully flip to cook the second side. Then cut into six triangles. Serving and Storage: Quesadillas are best eaten immediately while the tortillas are crisp. Leftovers can be stored in the refrigerator for up to 3 days. Reheat for about 15 to 20 seconds in a microwave, then transfer to a hot skillet to re-crisp and heat the outside of the tortillas. The cheese can be made in advance and refrigerated for up to 3 days.