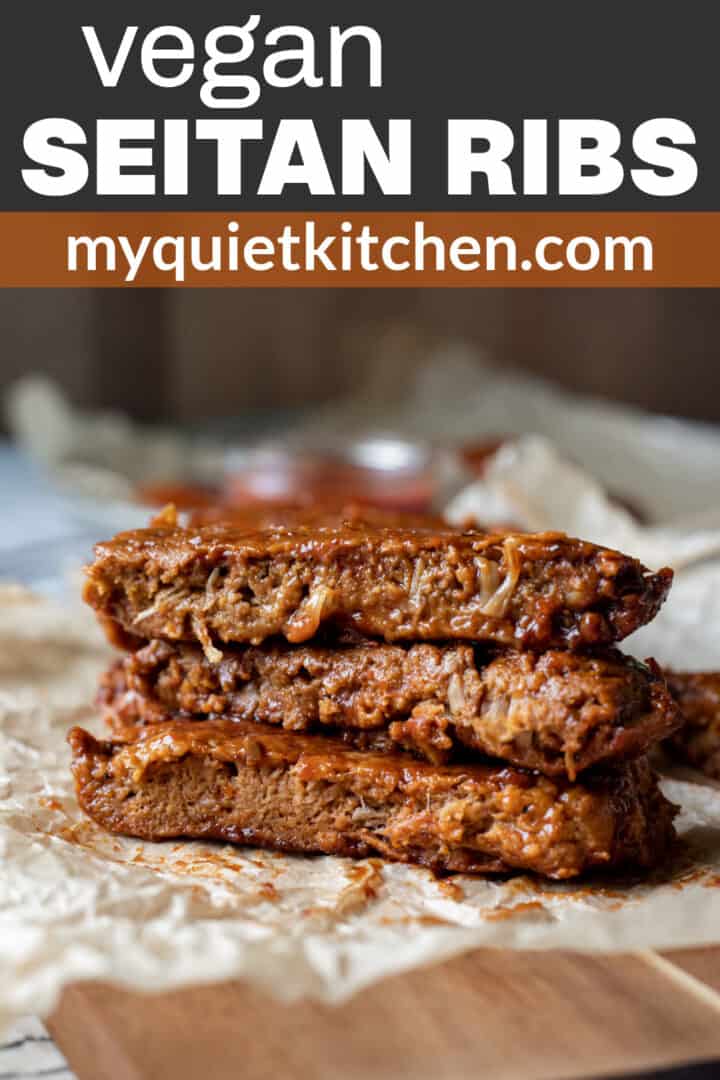 Are you ready for saucy, succulent, tender vegan ribs? Oh, and they're easy, too! If you think making seitan ribs sounds complicated, you're in for a treat. From backyard cookouts to weekly meal prep, this is an off-the-charts delicious and easy vegan BBQ recipe to return to again and again.

I'm SO excited to share this recipe with you! As much as I enjoy experimenting with seitan, I'm not sure why it took me so long to try a ribs recipe. I wasn't a huge fan of ribs before going vegan, so I suppose I was missing the necessary nostalgic motivator. But...

This weekend a local brewery is hosting a vegan BBQ cook off benefitting two animal rescue organizations. So I decided to throw my hat into the ring and have spent the past two weeks working on these vegan ribs.

I started with a recipe for Seitan Ribz by Susan Voisin over at Fat Free Vegan Kitchen. And then, because I'm a sucker for mushrooms and think they make everything better, I added some sautéed shrooms, onion, and garlic into the mix, as well as jackfruit and some other flavor enhancers.

With the recipe finalized a few days early, I thought I'd ahead and share it here. This way, if anyone asks about the recipe at Saturday's event I can send them right over.

In addition to a vegan BBQ main dish, we are also required to bring a side. My Best Vegan Mac and Cheese was an easy choice.

Coincidentally, a few years ago that recipe won a local vegan mac and cheese cook off. I've heard from so many of you who have fallen in love with it, and I hope the same thing happens with these vegan ribs.

There are a few steps involved in making this recipe, but it's really not difficult at all. So let's get to it!

UPDATE: the ribs won 1st place at the BBQ cook off! Turnout was amazing, and we had a blast while raising money for two local animal rescue organizations.

Vital Wheat Gluten - I use this one by Anthony's. Bob's Red Mill brand is widely available and also great.

Jackfruit - look for jackfruit packed in brine, not syrup. It's usually labeled as "young" or "green" jackfruit. I buy jackfruit at Trader Joe's, but there are several other brands available in stores and online.

Mushrooms - I tested this recipe twice with mushrooms and twice without. Mushrooms give the ribs a more savory, moist, and succulent quality, so even though this adds two steps to the recipe (sautéing and blending), I decided it's worth it.

Don't like mushrooms? See the Notes section of the recipe card for details on a mushroom-free version. It's even quicker and easier since there's no sautéing or blending involved.

Almond Butter - a small amount of added fat is important for the overall texture of the ribs. Almond butter is nice because of its neutral, roasted flavor. If you avoid nuts, replace this with 3 tablespoons of tahini or 2 tablespoons of oil.

Beef Flavored Seasoning - for 3 of the test batches I used Orrington Farms Vegan Beef Flavored Powder; I also tested one batch using a homemade beefy seasoning with mushroom powder, and it turned out great! So if you don't have the Orrington Farms product, head over to the vegan beef broth recipe to see how to make your own.

Barbecue Sauce - try my healthier homemade BBQ sauce or use your favorite store-bought sauce to save time.

Full ingredient list and instructions are in the recipe card below.

Note: you should end up with about 1 ⅓ cups of shredded jackfruit.

Making seitan is very much like baking, so having the correct wet-to-dry ratio is important. I recommend using a kitchen scale to weigh the vital wheat gluten flour.

Click the "Metric" button in the recipe card to see the weight (280 grams for the full batch). If you don't own a scale, whisk the flour first, then spoon it into your measuring cup.

The texture of the seitan ribs improves with rest. Straight from the oven they will be soft. After cooling for even just one hour you'll see an improvement, but an overnight rest is even better.

This recipe makes a large amount, about 5 to 8 servings depending on everyone's appetite. But even in our 2-person household we had no problem taking down a full pan of ribs over the course of a few days. Believe me, they're great for meal prep!

As mentioned above, I also tested a mushroom-free version. It was good, but we definitely preferred the ribs with the sautéed mushrooms and onion.

I've added details on how to make the mushroom-free version to the Notes section of the recipe card below.

If you'd rather not use the Orrington Farms beef flavored seasoning, it's very easy to make your own with salt, nutritional yeast, and mushroom powder. See the Recipe Notes for exact amounts.

I hope you LOVE these vegan ribs as much as we do! If you try the recipe be sure to comment below and give it a star rating. Hearing from you makes my day, and your feedback helps others!

If you enjoy the seitan-jackfruit combo, check out this new recipe for Vegan Buffalo Wings!

Watch the video to see how the ribs are made!

Homemade "Beef" Powder If you don't have access to Orrington Farms beef flavored powder, make your own with this beef-flavor seasoning recipe. Or for a super quick version, combine:  Mushroom-Free Version To make the ribs without the mushroom sauté, make the following changes: Storage Once the seitan is completely cool, transfer to an airtight storage container. Refrigerate for up to 5 days. I haven't tried freezing the ribs yet, but seitan typically freezes well. Reheating Avoid reheating seitan in the oven unless covered or wrapped in foil to maintain moisture.  The ribs can be quickly reheated on the stovetop, a grill pan, a grill, or in a microwave.