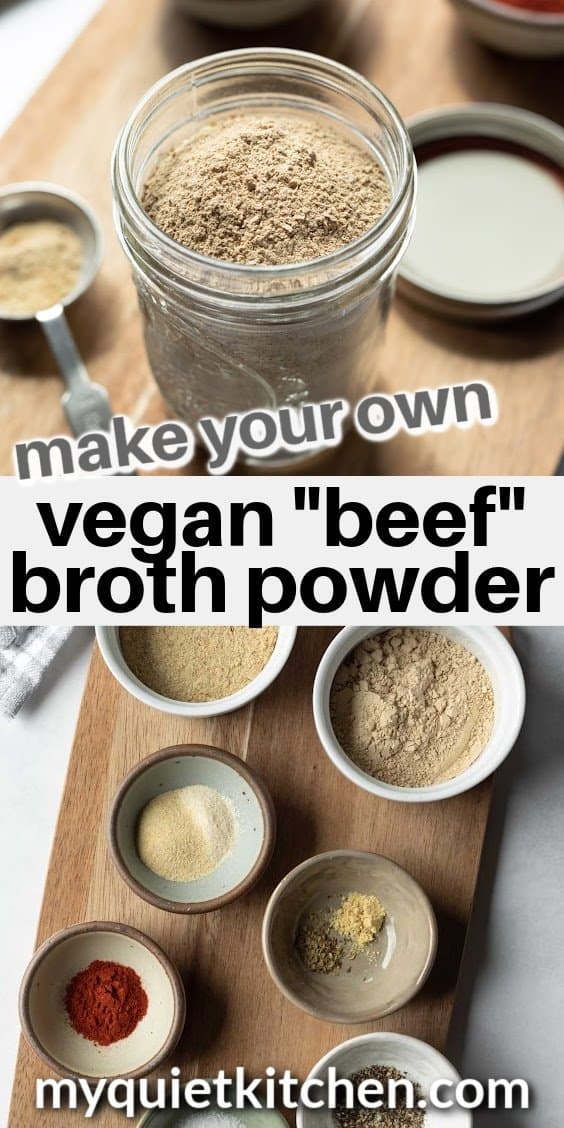 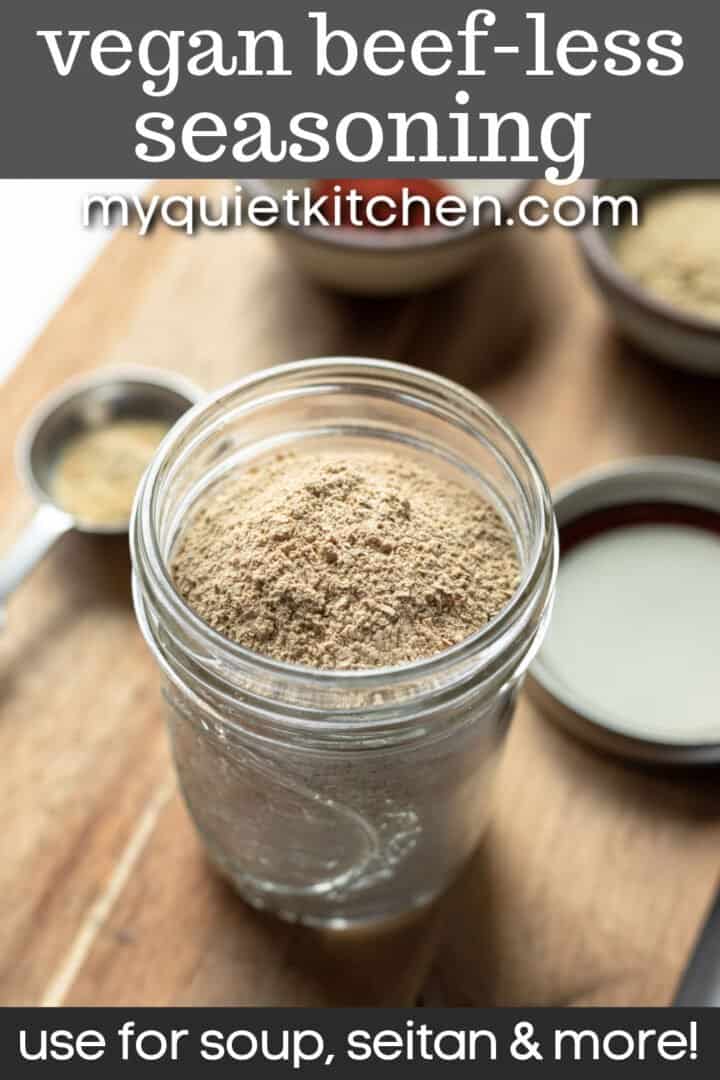 Make your own vegan beef broth and bouillon at home! This quick and easy umami seasoning blend is perfect for replacing store-bought vegan beef flavor products and bouillon. Made with dried mushroom powder, nutritional yeast, and a few herbs and spices, this homemade version of meatless broth is much more wholesome and versatile.

Whip up a batch in minutes, and you'll be ready to add depth of flavor to everything from vegan "beef" stew to soups, sauces, seitan, and casseroles! Contains no oil, gluten, soy, nuts, or refined sugar.

After some really positive feedback on my vegan chicken broth powder recipe I figured it's time for a beef version!

I've tried a variety of vegan bouillon products over the years, especially when testing recipes like Seitan Ribs and Vegan Turkey Roast.

Last summer I made many test batches of the ribs recipe because not only was it for a local vegan BBQ cookoff (and I wanted it to be juuuust right), but I also knew I'd be sharing the recipe here on the blog.

I ended up buying multiple jars of the vegan beef flavor seasoning by Orrington Farms (pictured below). Unfortunately, it's sort of pricey for what it is, and it's not exactly made with the highest quality ingredients.

It worked fine in the seitan ribs, which have LOADS of flavor from a variety of other ingredients, but on its own, the store-bought beef broth mix doesn't really taste all that great.

But this homemade broth powder actually tastes wonderful! Try it mixed in hot water for a soothing and nutritious broth.

This versatile seasoning is pantry-friendly and shelf-stable, so it's an easy ingredient to always have on hand.

If you're not sure how else you might use it beyond making broth, keep reading for ideas!

While there isn't a ton of room for substitution in this recipe, a few of the ingredients are flexible. I recommend trying the recipe as written first. Then, if there's something you'd like to tweak, you can adjust the individual ingredient amounts to suit your taste.

This part couldn't be easier! Simply combine the ingredients in a bowl or lidded jar, then whisk or shake it to combine. Ta-da! Homemade beef-y seasoning.

If the nutritional yeast you're using contains large flakes you may want to pulse it in a blender a few times to make it more powdered, similar to the mushroom powder, but that's totally up to you.

I like to keep a jar of this powdered umami seasoning in the refrigerator, right next to a jar of this chicken-less seasoning, so I can quickly grab them while cooking. Since this it made entirely of dried ingredients it keeps for months.

It's also fine at room temperature (as long as it's cool and dry) or in the freezer, if preferred.

If you include oil in your diet, try adding a few drops of a mild-tasting olive oil or refined coconut oil when using the powder to prepare broth. Oil contributes a richness that would normally be found in beef stock or broth.

Can I use vegan beef broth instead of vegetable broth in recipes?

Absolutely. When a recipe calls for regular vegetable broth, this mushroom-based vegan broth mix is a perfect substitute. Simply follow the recipe instructions to prepare the amount of liquid broth needed.

That's a great question and one that's difficult to answer definitively. The general answer is "many months." Refer to the freshness dates on the packages of mushroom powder and nutritional yeast to get an idea. To extend freshness store the powder mix in the refrigerator or freezer.

Add spoonfuls of this seasoning powder directly into recipes, or whisk with hot water to create a vegan beef broth base.

The next time you see a recipe that calls for vegan beef broth, you're all set with a healthy homemade option!

If you try the recipe I would love to hear from you. Comment below to let us know your favorite ways to use this beef-less seasoning! 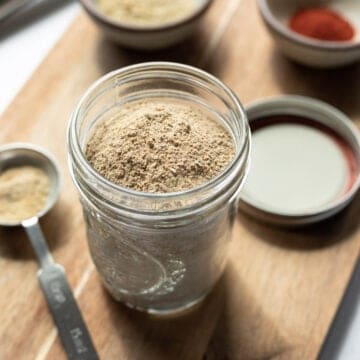 Author: Lori Rasmussen, My Quiet Kitchen
Make your own vegan beef broth and seasoning at home! This quick and easy beef-flavored powder is made with dried mushroom powder and a few select herbs and spices. Whip up a batch in minutes, and use this vegan pantry staple to add umami and depth of flavor to everything from soups to vegan meat replacements like seitan, lentils, tofu, and more! Yield: makes about ½ cup powder. To make broth, use 2 to 3 teaspoons powder per 1 cup hot water.
Servings: 10 servings
5 from 6 votes
Print Recipe Pin Recipe
Prep Time: 5 mins
Total Time: 5 mins

Option If you avoid plain salt or plan to use the mixture mostly as prepared broth, feel free to reduce or omit the sea salt in the powder. Then when preparing broth add miso and/or soy sauce (or tamari or shoyu), to taste.  Storage Since this broth powder is made entirely from dried ingredients it has a fairly long shelf life. Refer to the freshness dates on the packages of mushroom powder and nutritional yeast to get an idea. To extend freshness store the powder mix in the refrigerator or freezer.