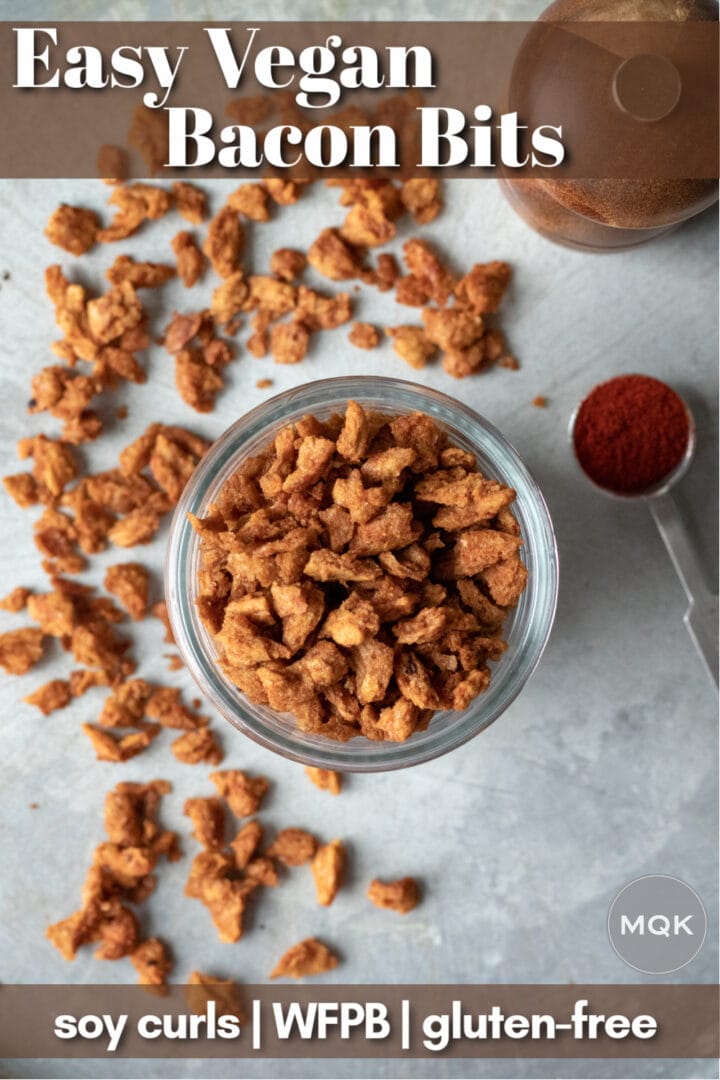 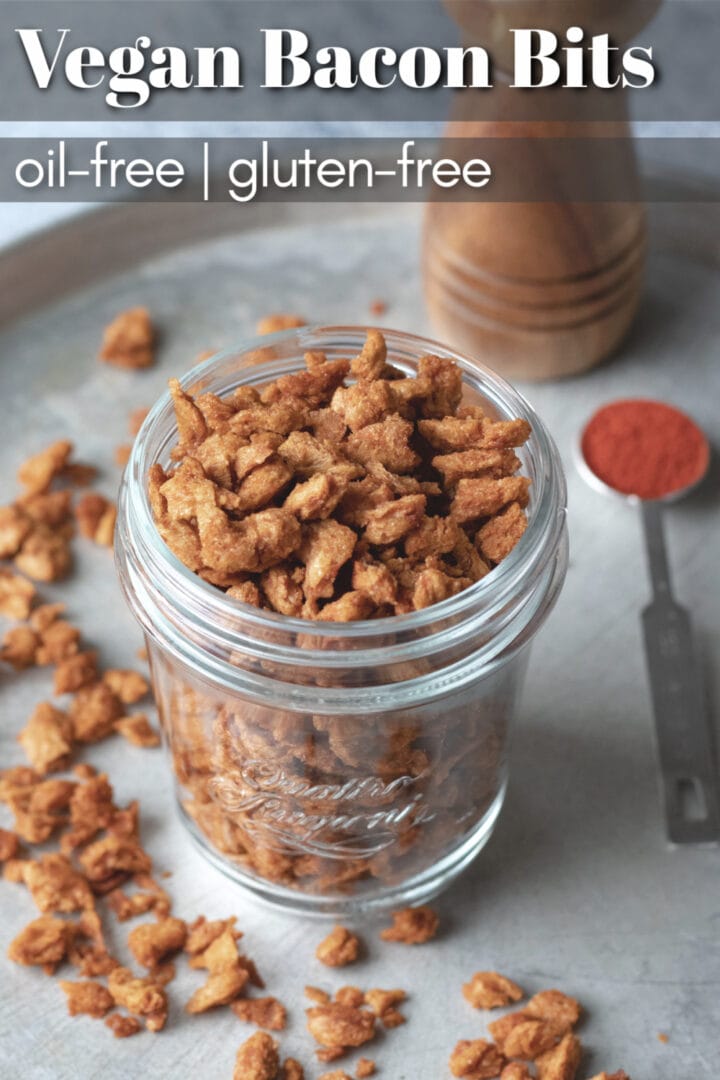 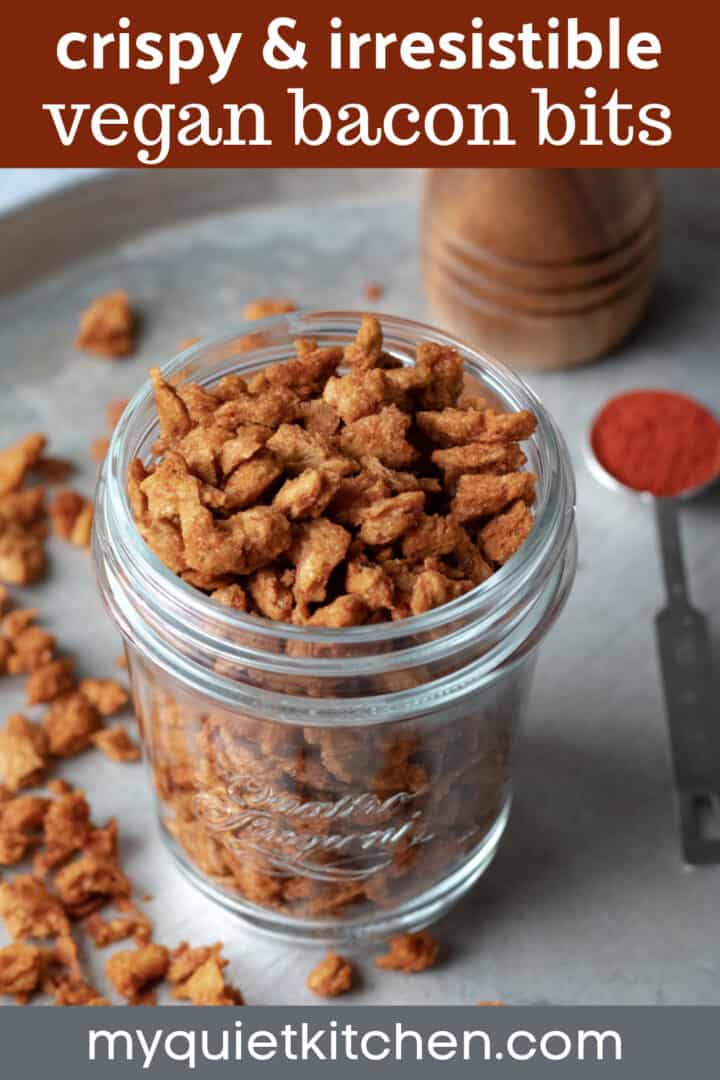 "I love these. I made them to put on a loaded baked potato and found myself snacking on them straight from the baking sheet!" - MDJ

When I first started cooking with soy curls, I never dreamed they would be so versatile. I've turned them into ground taco meat, added them to pot pies and Instant Pot curries, and even made slow cooker BBQ with them!

So I figured, why not make vegan bacon bits?

Not only are these soy curl bacon bits totally delicious , I also love that this recipe doesn't require any special equipment. And start-to-finish it only takes 30 minutes!

Most homemade vegan bacon bits recipes use TVP, or textured vegetable protein. TVP is an easy way to create vegan bacon bits, but I prefer this richer (and some would say healthier) soy curl version.

TVP is not considered a whole-food since it doesn't contain all parts of the soybean. It has been de-fatted, which sounds like a good thing, but really TVP is just a by-product of soybean oil production.

This may seem like a silly question, but actually, there are some store-bought bacon bits that are vegan. McCormick and Frontier are two common brands of bac-un bits that happen to be vegetarian/vegan.

Even if you're lucky enough to come across vegan bacon bits at the market, most contain maltodextrin, dextrose, or other preservatives you may not want in your food.

The good news is that it's really easy to make your own vegan bacon bits at home, and your family will love the crunchy texture and delicious smoky flavor!

What are soy curls?

If you haven't cooked with them before, soy curls are simply dried and pressed soybeans. They have a chewy texture and absorb flavors really well, making them an excellent vegan meat alternative.

You can find soy curls online or at some natural food stores. I usually purchase them directly from the Butler Foods website or from Amazon. 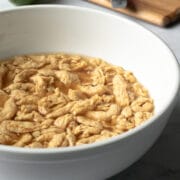 This post has all the details! 19 Vegan Soy Curl Recipes + FAQs

How To Make Vegan Bacon Bits

Here's a quick summary to give you an overview of the process. Full recipe and instructions in recipe card below.

If this starts to hurt your fingers, you can finish the job AFTER pouring on the marinade, when they're softer.

TIP:
Don't be tempted to use a food processor to break up the soy curls. It turns some of the soy curls into dust while leaving others chunky. And the unevenness in size leads to uneven cooking.

How do I know when they're done?

At 17 minutes they'll still be a bit chewy, which you might want depending on how you plan to use the bacon bits. If you want super crisp and crunchy bits bake them longer.

Another way to achieve crispier bits is to reduce the coconut milk to 1 or 2 tablespoons, or simply omit it.

Keep an eye on the bacon bits in the last few minutes due to oven variance and so they don't burn, which can happen quickly!

For me it usually takes 18 minutes to reach a chewy stage and about 24 for crispy bits, but keep in mind, the size of the pieces makes a big difference.

And that's it! You just made your own healthy vegan bacon bits.

Allow the bacon bits to cool completely before storing in an airtight container in the refrigerator. I feel comfortable keeping them for 1 week, though I'm sure they'd be fine longer since they contain almost no moisture.

Vegan bacon bits also freeze well. From the freezer, just move them back to the fridge, and use as desired.

If you include oil in your diet feel free to add 1 to 2 tablespoons of a neutral flavored oil to the marinade. Obviously bacon is very high in fat, and soybeans are not. So a touch of oil adds a bit more richness.

Ways To Use Vegan Bacon Bits

For a smoky and salty burst of crunch, they're great on salads, grain bowls, and baked potatoes.

And when baked just until chewy, these tasty morsels are excellent stirred into mashed potatoes and potato salad.

If you also find yourself eating these healthy bacon bits by the handful I completely understand. That happens a lot in our house!

I hope you enjoy these vegan bacon bits as much as we do. If you try the recipe be sure to comment below and give the recipe a star rating to let others know how they turned out!

Storage Store bacon bits in an airtight container in the refrigerator for up to 1 week.  To freeze, make sure they're in an airtight, freezer-safe container. They contain almost no moisture, so they don't require much time to thaw before using. Oil Option If you include oil in your diet feel free to add 1 or 2 tablespoons of olive oil or another neutral oil to the marinade. Obviously bacon is very high in fat, and soybeans are not! A touch of oil adds more richness, if desired. But they're absolutely delicious and crisp even without oil. Nutrition As always, nutrition info is an estimate. This values are based on 8 servings per batch. The number of servings you'll get per batch will depend on how the bacon bits are used.

Did you try the recipe?I LOVE hearing from you! Comment below to let us know.
« Vegan Cheese Stuffed Breadsticks
Vegan Creamed Corn Pizza »