This Sweet Potato and Kale Pot Pie is vegan comfort food at its most wholesome! A simple almond flour crust covers tender and colorful veggies. The filling is made even more satisfying with the addition of soy curls and mushrooms. Whole-food, plant-based (WFPB), oil-free, gluten-free. 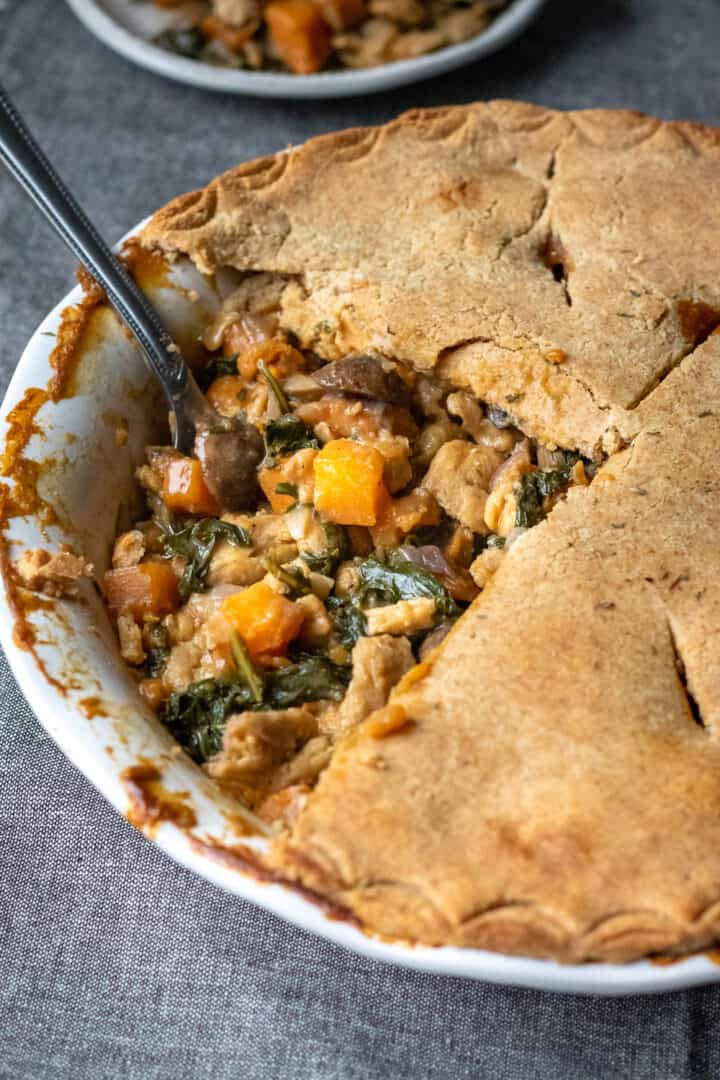 When you find yourself in the mood for a dish that feeds your comfy, cozy, fall and winter vibes, this pot pie will do it! And if you're feeling a bit intimidated by the idea of pot pie with, you know, oh-so-scary pie crust, let me put your mind at ease. This is no ordinary, fussy pie crust!

If you've seen my recent posts, Healthy Vegan Pie Crust and Vegan Gluten-Free Pumpkin Pie, you're probably already clued in to exactly how awesome and easy this pie crust is (because I keep raving about it). But if you haven't been introduced yet, here's a quick summary:

If by chance you fall into both of those categories, you can use GF oat flour or brown rice flour instead of white rice flour, though those aren't my top recommendations. The dough will be a bit more crumbly than the other versions, which makes it more difficult to roll out and shape. But using oat flour can work, and it is delicious! The catch is that the dough holds together best with either the sticky starch of the white rice flour or the gluten from a wheat flour (whole wheat and spelt both work well).

If you have a favorite gluten-free, whole-food pie crust recipe already, feel free to link to it in the comments below. Until I can do more testing, my best advice is to use one of the two options included in the pie crust recipe as written.

In the pie crust post you'll see it includes simple, step-by-step photos to guide you through the process. I promise it's easy, even if you've never made any type of pie crust before! 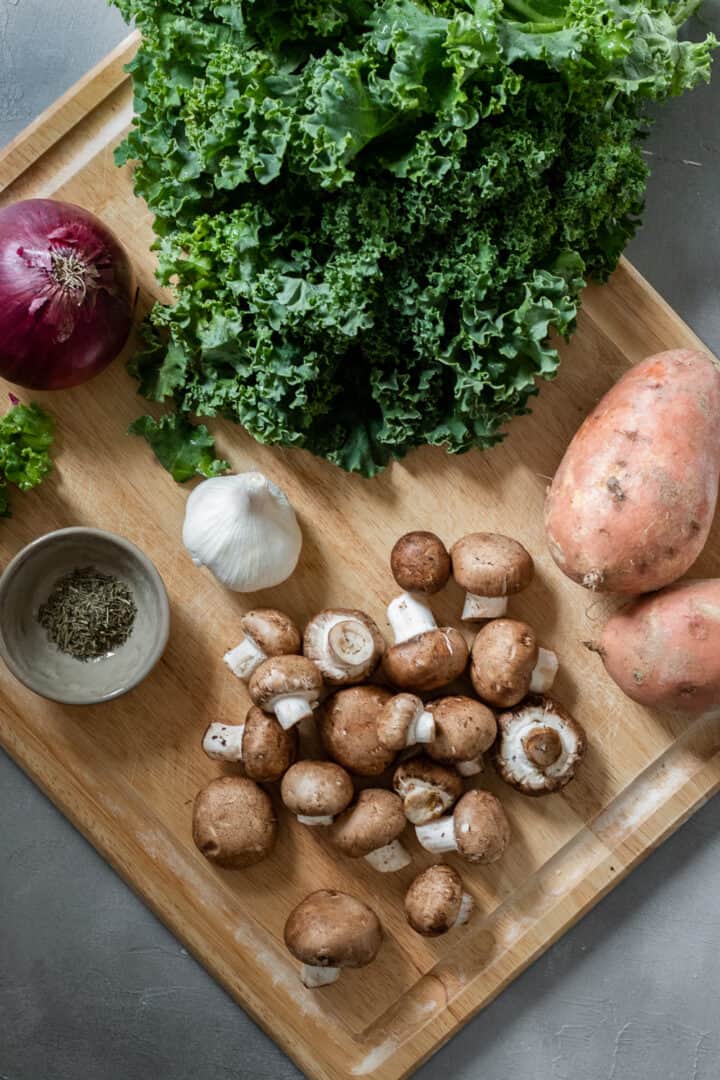 I just love sweet potatoes, don't you? I also love kale. And mushrooms. And onion. And garlic. And thyme and sage! So I figured why not combine these lovely flavors and colors into a vegan pot pie? Thyme is used in most traditional pot pies, but the similarities between those recipes and this one end there.

Instead of the usual suspects like peas, carrots, meat, butter, and a flour-thickened sauce, we're not only changing up the veggies but lightening up this dish considerably. We're not using any added fat (like oil or butter), and we're using healthy, 1-ingredient Butler soy curls as our meat substitute. If preferred, tofu, tempeh, beans, or seitan would also be delicious in this pot pie. 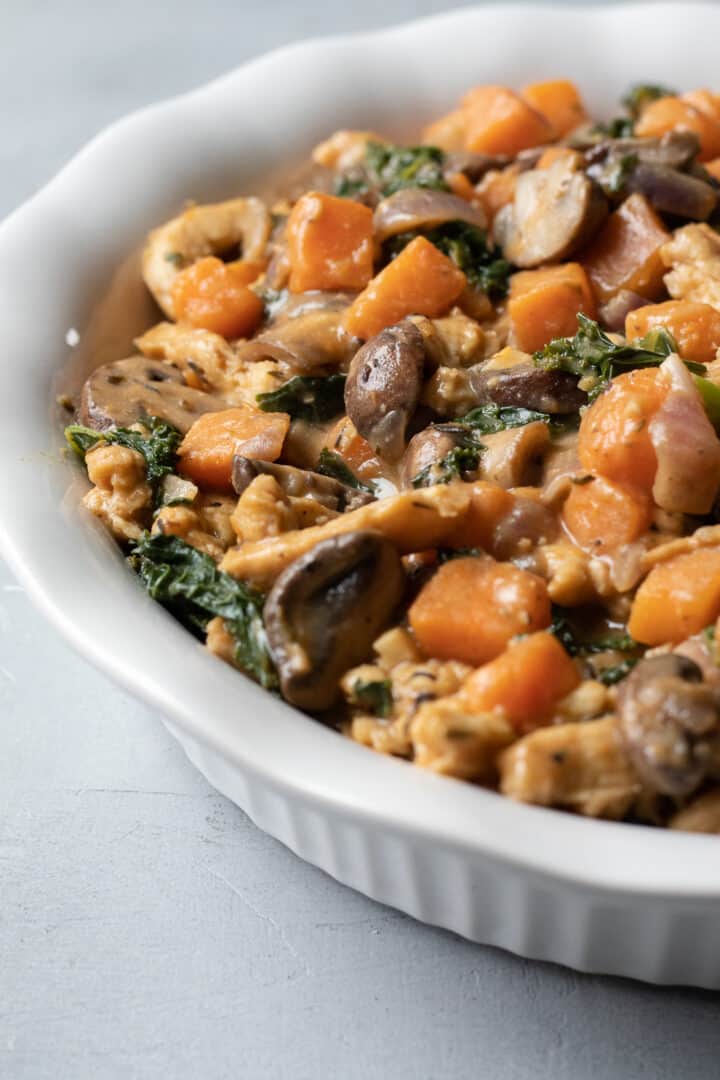 I have to admit, I only started cooking with soy curls in the past year. Even though I've been into vegan food and cooking for about eight years now, I hadn't heard of soy curls until a few years ago. And when I did, due to their unfortunate name (sorry guys, but you've gotta admit "soy curls" isn't the most appetizing product name), I assumed they were a highly processed, isolated soy protein type of thing. So I didn't bother digging deeper. Thankfully I was wrong! Head over to www.butlerfoods.com to learn more about how soy curls are made.

UPDATE: I've been cooking with soy curls for a few years now and am a serious fan! Check out this new post with 18 amazing vegan soy curl recipes + FAQs.

Texture-wise, soy curls are similar to seitan, but they're made from whole soy beans. So for people who can't eat gluten, they're an excellent substitute for recipes that call for seitan.

You can always turn this into a double crust pot pie if you like. What I like about top-crust-only pot pies is that there's more room for filling inside! And when it comes to sweet potatoes and kale, I'm all about MORE!

To streamline the prep, I like to chop the vegetables in the order they go into the pan, and cook at the same time. For example, chop the onion and sweet potatoes first, while the pan is preheating. While they cook, slice the mushrooms. After adding the mushrooms, chop the kale and mince the garlic, and so on.

Maybe this is how you cook, too. Some people prefer to do all the washing and chopping first, before they begin, and I think that's great! I'm just a bit too impatient and like to hurry dinner along.

By allowing "prep time" and "cook time" to overlap, we can save a LOT of time. Of course, another option is to prep all of the veggies first, then, while they cook in their various stages, you can multitask by making the pie dough. That's some pretty serious multitasking, though. I think if I was stirring onion and sweet potatoes AND trying to measure ingredients for something as important as dough, the likelihood of a mistake would increase exponentially.

This recipe makes enough filling and crust for a 1.5 quart dish. I used a 9.5-inch deep dish pie plate. If you want to make a slightly smaller pot pie and/or you only have a standard 9-inch pie plate, you can decrease the filling ingredients by ¼ to ⅓ (but keep the pie crust as is). 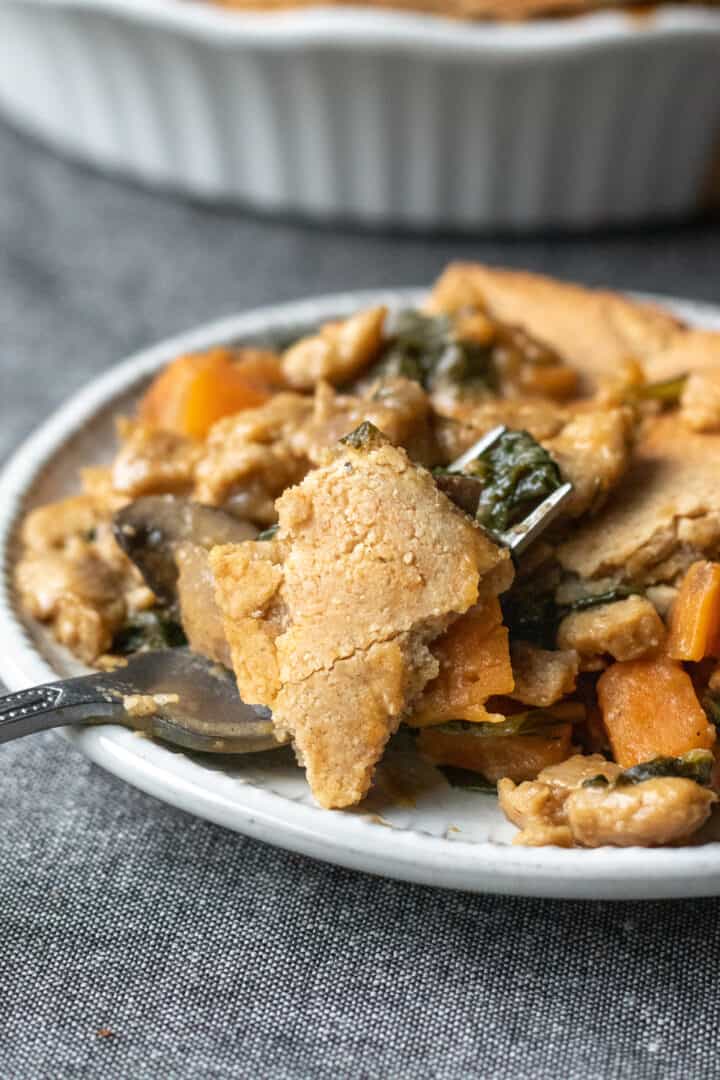 I just LOVE the way almond flour creates a crispy, rich, buttery crust. I'll take one of these over a standard pie crust made from all-purpose flour and saturated fat any day. 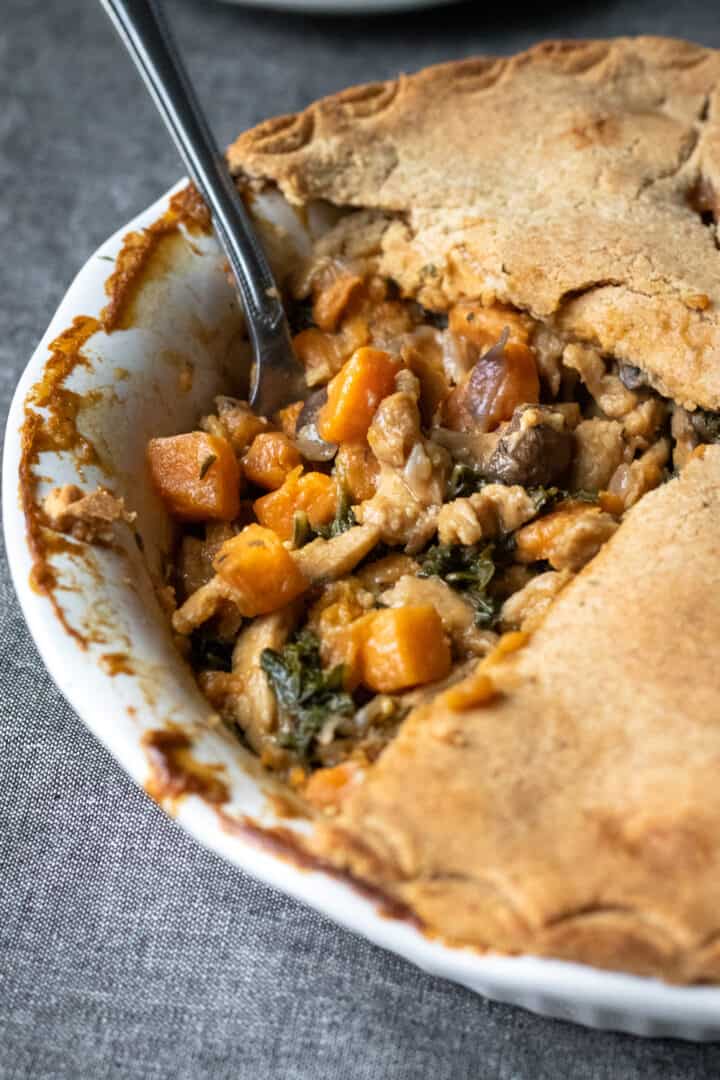 I hope you enjoy this wholesome, whole-food plant-based pot pie as much as we do. If you make it I would love to hear from you! Drop a line in the comments below to let everyone know how it turned out. And if you get creative with filling ingredients, herbs and spices, please share that, too! 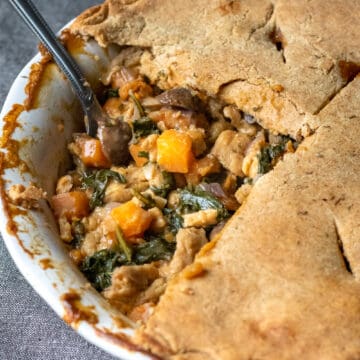 Pot pie is best eaten the day it's made.  Store leftovers in an airtight container in the refrigerator for up to 3 days.