What can I say? I love vegan jerky! And apparently I'm not alone, because my original recipe for Teriyaki Seitan Jerky is one of the most popular posts on the blog (thank you, jerky lovers). So let's get into some new flavors today, shall we? How about Buffalo and Thai Peanut!

How to Make Vegan Jerky

The basic method for these two flavors is similar to the Teriyaki recipe. It starts out like traditional seitan, but we actually build the flavors right into the dough. Once the dough comes together, we knead it, cut it into four equal-sized pieces, and freeze it for about 30 minutes. This firms up the dough and makes it easier to slice.

I like to use a chef’s knife to carve my jerky slices, but a serrated knife would probably work, too. You want to slice the seitan as thinly and uniformly as possible. It doesn’t have to be perfect, but the more similar in thickness the pieces are, the more consistent the cook time will be. It's definitely okay to embrace the jagged edges and varied shapes, though, you know, to make it look like jerky.

Once the slicing is complete, the seitan takes a dip in sauce and is either draped across racks (if you have them) or put directly on parchment-lined pans. Then, bake it low and slow for about an hour-and-a-half. And just like that, you have delicious, healthy, homemade vegan jerky!

I got a tad impatient while slicing some of these because I was doing two batches at once. So some of the pieces were thicker than I usually like (see the one in the center of the above photo?).

Even still, this really wasn't a problem. It just meant that I had to sort through the tray near the end of cooking, removing some of the thinner pieces that were done, and putting the thicker ones back in the oven for a few minutes. No big deal!

The photo above shows the raw Buffalo jerky just after being dipped in sauce and right before going into the oven. The photo below shows them after 30 minutes of baking at 250 degrees. Even though that's only about one-third of the way through the cook time, you can already see how much drier and jerky-like they look.

The thickness of your pieces, along with a few other factors I'll mention below, determine the cook time, so keep that in mind. Check the consistency at the 30 minute mark (they should still feel pretty soft) and again at the 1-hour mark, and you'll get an idea for the progression of doneness.

Check again 15 to 30 minutes later. When the thickest pieces no longer show signs of that raw seitan texture, you’ll know they’re done. Allow the jerky to cool completely, and store it in an airtight container.

Honestly, I'm not sure exactly how long the jerky keeps because it never lasts more than two days in our house! So use your best judgment. Considering it's not made from highly perishable ingredients AND it's dried, I feel comfortable keeping it up to a week.

An important tip for the best seitan jerky

As I mentioned in the Teriyaki Seitan Jerky post, storing the jerky in an airtight container for a few hours (or overnight) can correct any pieces that come out of the oven a little too crispy.

When they're all cozy and closed up together, the moisture redistributes and helps make the jerky more uniformly chewy. Let's call it vegan jerky magic.

The following is copied from my Teriyaki Seitan Jerky post. Hopefully these additional details will help you achieve jerky success on your very first batch!

Factors that affect the cook time

There is a bit of an art to knowing when the jerky is done. But if you read the tips below (also summarized in the Notes section of the recipe), you'll be ready to make jerky like a pro.

Pour vital wheat gluten into a large bowl and gently whisk to fluff it up (like other flours, it becomes compacted in its original package, causing you to scoop up more than is needed). Gently scoop it up with a measuring cup, then level off the excess using the flat edge of a knife.

Side note: if you enjoy baking and don’t yet have a kitchen scale, I’ve been using and enjoying this affordable one from Escali.

But before you start thinking, “Ugh, this sounds too hard!” rest assured that there isn’t ONE specific level of doneness, where anything outside of that means failure. Nope! There is actually a somewhat forgiving window. Here are my best tips:

If you make either of these seitan jerky recipes I would love to hear about it! Tag a photo @myquietkitchen on Instagram, and leave a comment below to let us know how it goes. Happy snacking! 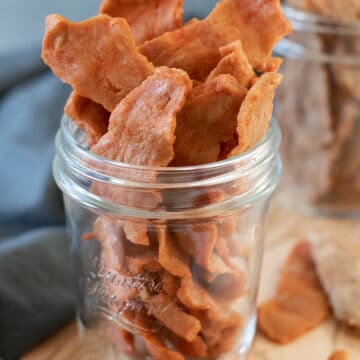 Instructions are the same for both flavors: