Get each new recipe delivered right to your inbox...

This is a bit long, but I’m a sucker for a good vegan story! I love learning about the different ways people make the connection and decide to become vegan. So, hopefully someone out there will enjoy hearing my story, too.

Growing up I spent a lot of time hanging out at the health food store where my mom worked. This led to afternoon snacks like kefir and sesame sticks instead of Little Debbies and Doritos. Way ahead of her time, Mom followed a Macrobiotic diet for several years to address health issues she was experiencing. I was in elementary school at the time and sampling foods like miso soup, brown rice, seaweed, and lentils. Was I impressed? Not even a little! Without access to junk food at home, you can probably guess what I did when visiting friends’ houses. I took every opportunity to raid their kitchens for chips, ice cream, candy, and soda. And boy, did my taste buds love it! Throughout my teens I continued to eat well at home while getting my junk food fix from vending machines at school. Thankfully, Mom’s emphasis on nutrition over the years finally began impacting my food choices while I was in college.

I studied health and fitness in school and then worked in the fitness industry until around age 30. This is also when I met my husband, Mark, who was working as an Exercise Physiologist at the time. Though both of us were interested in nutrition, we were also victims of the Food Guide Pyramid and the typical fad diets of the early 2000s. The Atkins, Zone, and South Beach Diets were everywhere! And honestly, in my twenties and early thirties, all I really cared about was how I looked, not what was actually going on inside my body. As is often the case when we’re young, I guess I also felt a certain amount of invincibility. Cancer, heart disease, and diabetes were diseases that happened to other people and were certainly genetic or random, right? So what could I do about it anyway? We lived in my home state of Alabama at the time, and to my knowledge I had known a grand total of about three vegetarians in my entire life and exactly zero vegans. I didn’t understand veganism at all, and like most reasonable people I bought into the myth that it was extreme (though I’d always considered myself an animal lover). I definitely hadn’t encountered any information about why I would want to cut animal products from my diet or about the other industries that I now know also exploit them.

And then there was Yoga

I got into yoga around 1999-2000 and began teaching not long after. But it wasn’t until 2010, when I attended a sixteen day residential training at White Lotus Yoga Foundation in Santa Barbara, that I began to think of vegetarianism as a real, meaningful, and interesting possibility. First of all, the food we ate there was amazing! From scratch. Delicious. Fresh. Exciting.  Head Chef Beatrix Rohlsen’s food is a bit legendary in the yoga world. It was clear that most of us in attendance weren’t vegetarian or vegan, but all of us fell madly in love with the food.

More importantly, our studies touched on the tradition of vegetarianism in yoga due to Ahimsa, the principle of non-violence toward all living beings. Ahimsa centers around intent and can be thought of as an attitude of universal benevolence. Trust me, even years later I don’t claim to have a handle on this principle (it’s a lifelong journey, for sure), but simply learning of it triggered something inside me. It was a light bulb moment. This concept and way of moving through the world seemed like an obvious truth we all share, one that just needed uncovering.

“If I couldn’t kill an animal myself, why am I okay with someone else doing it for me?”

“And now that I know I can live a healthy life without consuming animal products, why would I continue to do it?”

The months following my time at White Lotus consisted primarily of me trying to figure out how to lean in the direction of vegetarianism while still having the same habits and mindset I’d had before. We lived in a small town in Wisconsin at the time, and there weren’t any veg-friendly restaurants or grocery stores, no Meet Up groups or anything of the sort. And of course Mark still thought he needed burgers, chicken, Greek yogurt, and cheese curds in order to crush workouts, build muscle and be satisfied. I knew a superficial amount about factory farming and knew consuming these products couldn’t possibly be healthy. Not wanting to support those industries, I tried finding free range, cage-free, and organic meat and eggs (a stage I now know is very common among pre-vegans). But as I explored these more “humane” products, nothing was making sense. It felt disingenuous, too hard, too expensive, and pretty elitist, honestly. In my heart, I knew it wasn’t the logical answer to my dilemma. I didn’t want to hurt animals anymore.

Labor Day weekend of 2011 we were in East Troy, Wisconsin, for PJ20, Pearl Jam’s 20th anniversary weekend. Yes, we’re total Gen X’ers and yes, it was epic! The fact that we scored tickets was a miracle, and as long-time PJ fans we were super excited. PJ20 consisted of two days of music, with supporting acts during the day and Pearl Jam at night. Chris Cornell even made a surprise appearance. East Troy itself is a very small town and doesn’t offer much in terms of restaurants, so one day we decided to drive to Madison to visit a brewpub for lunch. We were just getting into craft beer at the time and thought a beer and a burger sounded fun. During the hour-long drive to Madison we listened to one of the cds included in our PJ20 goody bags, a live recording from a past Pearl Jam concert. In between songs suddenly Eddie Vedder began ranting about fur and veal, telling concert-goers to stop by and talk with some animal rights activists who were tabling outside the concert that night. If you’re a Pearl Jam fan, you know how funny and honest Eddie can be when he gets riled up. Well, his no-holds-barred rant lit a fire under my ass. I knew in that moment that I agreed with everything he said about animals and the way we should treat them. Suddenly, all I saw was truth. No excuses.

As Mark and I perused the menu at Great Dane Brewpub, I noticed a veggie burger option, which was probably a frozen Boca patty (but cost the same amount as the grass-fed beef burgers they were so proudly pushing). For us, people who considered ourselves foodies, the obvious thing to do was to order their specialty burger. But I’d just had that moment of truth in the car! I remember looking at Mark and saying, “I really want the veggie burger, but I feel like that’s silly.” And with more gratitude in my heart than I can express to you here, I recall his perfect answer. “If you want the veggie burger, you should get the veggie burger.”

Just like that, I had the permission, support, and encouragement I needed to make that singular decision that ended up changing our lives forever.

After that weekend, I was excited to learn more about meat-free eating and began scouring the internet, reading blogs, and checking out so many books from the library. I very quickly realized it wasn’t only meat I wanted to exclude from my life, but dairy and eggs, too. I continued to learn about the practices involved in creating other products like leather and wool, about vivisection, circuses, marine parks, and other ways we harm and exploit animals. I started to truly understand veganism for the first time in my life, and I knew it was the answer I’d been seeking.

Initially Mark said he planned to continue to eat animal products, but my excitement while reading The China Study piqued his interest. Soon he was reading it, and as a medical professional, The China Study caused him to go vegan overnight. My Wisconsin-born, Strong Man Competition-loving, Ben & Jerry’s-eating, cheese-addicted husband dumped animal products like radioactive waste. And we’ve never looked back.

What I love about how our particular story unfolded is that it highlights how fragile we can be, at the mercy of our tribe, our friends, our family, our society. Some people are confident enough to go vegan without an ounce of support from their loved ones. I guess I wasn’t. I needed that moment of Mark telling me that deviating from the norm and doing what I wanted to do wasn’t silly. And in complete honesty, I’ve never once felt silly or insecure about it since, not around extended family, friends, strangers, co-workers, no one. As humans, we know how strongly we desire to fit in. I truly believe more people would arrive at the same truth Mark and I did and feel encouraged to eliminate animal products from their diets if there was just that one supportive person, that one empowered moment, a window in time where we see exactly how simple and possible it can be.

Thankfully, SO much has changed in the past several years regarding the public’s knowledge about veganism and the availability of vegan products in stores and restaurants. More and more companies view the certified vegan label as a selling point and are adding it to their packaging, big-time investors are backing plant meat products, and chain restaurants and stores are adding more vegan items every day. The world is changing, and the pace of change is only going to increase. It has to. For everyone who understands the environmental and ethical impacts of animal agriculture, it can’t happen soon enough. 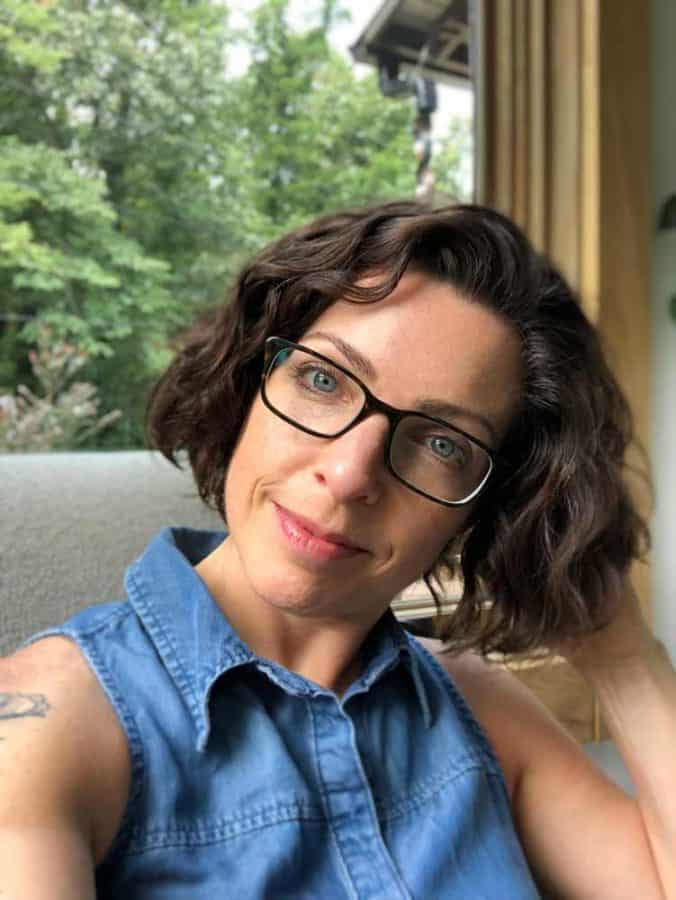 Random things about me:

Outside of the kitchen, I enjoy running, yoga, rap and hip hop music, hanging out with my husband at home or at one of Asheville’s many breweries, hiking the trails around Asheville, travel, reading, and writing. I love comedy, and I avoid horror movies like the plague. I really dislike loud noises (ugh, fireworks). I LOVE fall and cool, crisp temperatures (and apparently, I’m also a huge fan of parentheses).

I’m a totally-sane-cat-lady and proud cat mom to two kitties, Millie and Sissy.

Food-wise, here are some things you should know about me: I love things made from corn, like tortilla chips, cornbread, corn muffins (are they simply cornbread but in different form?), and polenta. I’m also a huge fan of cold+creamy+sweet foods like yogurt, pudding, ice cream, smoothies, etc. I also LOVE crunchy foods like raw carrots, nuts, chips and crackers. And thanks to four years working in the craft  beer industry, I know a decent amount about beer. Cheers, friends!

Hi, I'm Lori.
I share approachable vegan recipes with a healthier twist. Many are gluten- and/or oil-free or easily made that way. I also have a passion for veganizing classic desserts, and sometimes even those get a healthy-ish makeover.
More about me and My Quiet Kitchen...

Affiliate Program Participation:
I use affiliate links on the Resources page of this website and occasionally in individual posts. If you click through these links and make a purchase, I may receive a commission at no additional cost to you.