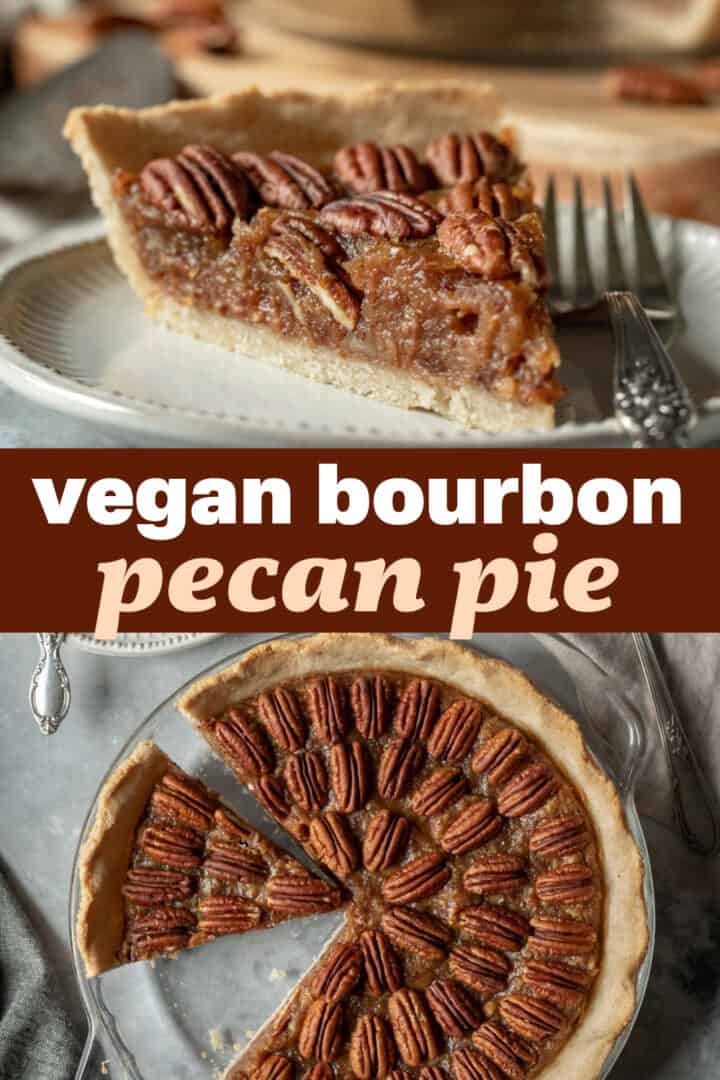 A generous splash of bourbon gives this Vegan Pecan Pie even more warm and festive flavor! No eggs, dairy, or corn syrup here. The sweet and rich filling is made with just 8 ingredients, including dates, plant-based butter, and maple syrup. It's nutty, easy, and perfect for the holidays.

Pecan pie is a southern classic, and growing up in Alabama I ate plenty of it. Of course, back then I wasn't vegan. Heck, no one I knew was vegan! So those pies were made with dairy and eggs, and there was probably lard in the pie crust.

Since eggs, butter, and corn syrup make up the bulk of the sweet and sticky filling in classic pecan pie, you might expect it to be a difficult dish to make vegan. But like so many other desserts, it's actually surprisingly easy!

While there's no shortage of vegan pecan pie recipes online, this year I wanted to come up with my own twist, using a beloved vegan ingredient that doubles as both a sweetener and an egg replacer..... dates!

Dates are perfect in so many desserts because of their natural caramel-like sweetness and stickiness.

I knew after just one test batch of this recipe that the dates were a winner. However, that didn't stop me from making this pie at least four more times over the following two weeks (I say at least because, well, I may have lost track).

I wanted to get the recipe just right for the blog, but also, this was right before Thanksgiving. We had two Friendsgiving potlucks to attend, which meant extra opportunity for feedback from taste testers!

Here's a quick look a the 7 ingredients you'll need for the pecan pie filling.

If you're intimidated by pie, please don't be! I promise you can do this. Especially if you use my almond flour pie crust. It's seriously the EASIEST pie crust recipe you'll ever work with.

It's gluten-free and made without butter or oil, so you don't need to worry about overworking the dough or keeping everything cold. It's about as fool-proof as pie dough gets. Okay, onto the pie filling...

When you first pull the pie from the oven the filling will be bubbly, slightly puffy, and gorgeous. No eggs needed!

Let the pie cool then serve with your favorite vegan ice cream or whipped topping.

The flavor is slightly different than classic pecan pies made with corn syrup. But in my opinion, that's a good thing! If you're one of my regular readers, you already know my approach to recipe development is one that embraces more wholesome and natural ingredients... most of the time.

I'm not claiming this is a "healthy" dessert. If that's what you're looking for I highly recommend this healthier vegan pecan pie (it's oil-free and gluten-free).

But this vegan bourbon pecan pie is meant for special occasions. There's no shortage of fat and sugar here.

Can I make it without bourbon?

Absolutely. For a booze-free pecan pie simply substitute non-dairy milk or orange juice for the bourbon.

You can also vary the amount of bourbon to suit your taste - any amount from 2 to 5 tablespoons works well. We found that 4 tablespoons (¼ cup), is enough for the bourbon flavor to really shine without being too strong.

Just like our chocolate pecan pie, this vegan bourbon pecan pie is great for carrying to parties and family gatherings because it holds up beautifully at room temperature.

Though traditionally served at room temp, pecan pie can also be served slightly warm, which is especially nice a la mode.

After removing the pie from the oven, let it cool for 2 to 3 hours. Loosely cover with plastic or foil. Store leftover pie in the refrigerator for up to four days.

Vegan pecan pie is also freezer-friendly. Be sure to wrap it well to protect from air and freezer burn, and freeze for up to one month. Thaw overnight in the refrigerator before serving.

If you try this Vegan Bourbon Pecan Pie recipe I would love to hear from you. Comment below with a star rating and let us know! 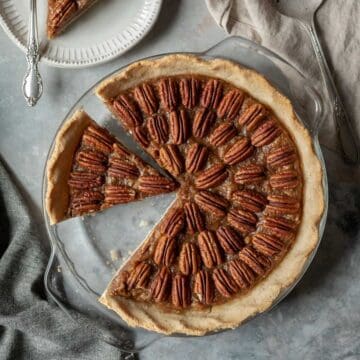 A few notes about pie crust - For one test batch I used this recipe for Easy Vegan Pie Crust by Sam over at It Doesn't Taste Like Chicken. You can't go wrong with that basic recipe. Just be sure to thoroughly chill all of your tools and your shortening/butter before beginning. I also found that allowing the dough ball to rest in the refrigerator for about 30 minutes before rolling it out helps the flour hydrate and makes it much easier to work with. Sam calls for non-dairy milk, but I used ice water instead with great results.  If you haven't made pie crust before I strongly suggest one or two test runs before making it for an occasion. Or use a store-bought vegan pie crust (just be sure to check labels for animal ingredients). Store - After removing the pie from the oven, let it cool for 2 to 3 hours. Loosely cover with plastic or foil. Store leftover pie in the refrigerator for up to four days. To freeze, wrap it well to protect from air and freezer burn, and freeze for up to one month. Thaw overnight in the refrigerator before serving.

This recipe was originally published in December 2018 and has been updated with new photos and a few changes to the recipe. If you were a fan of the previous version and would like to know what changed, drop me a line in the comments below!