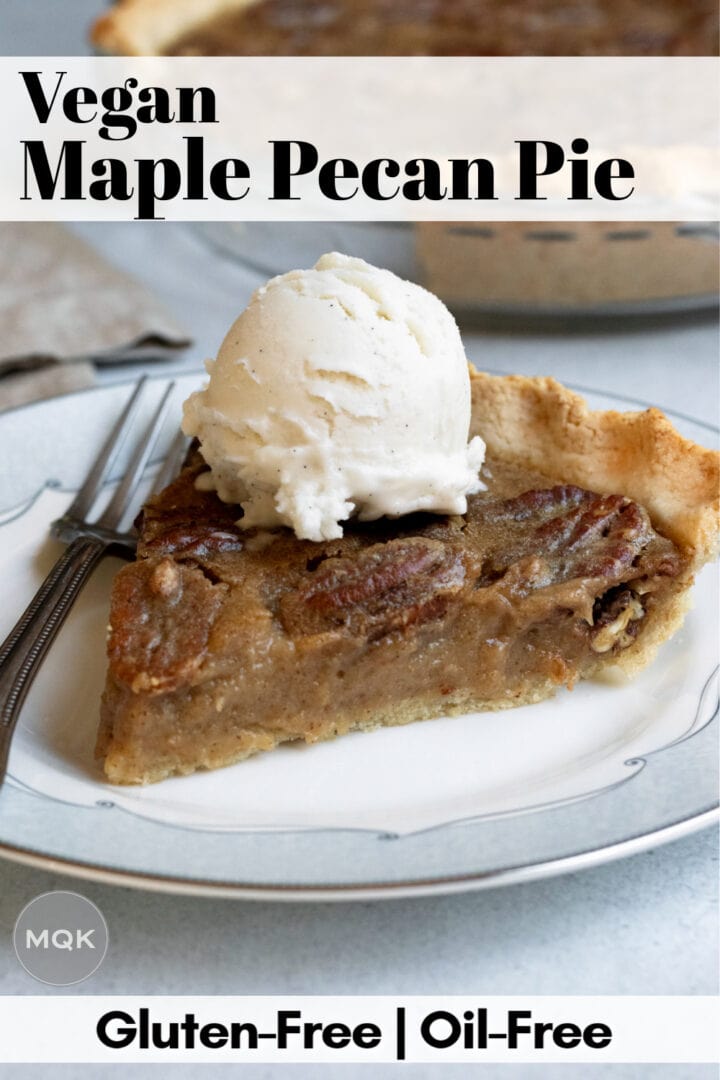 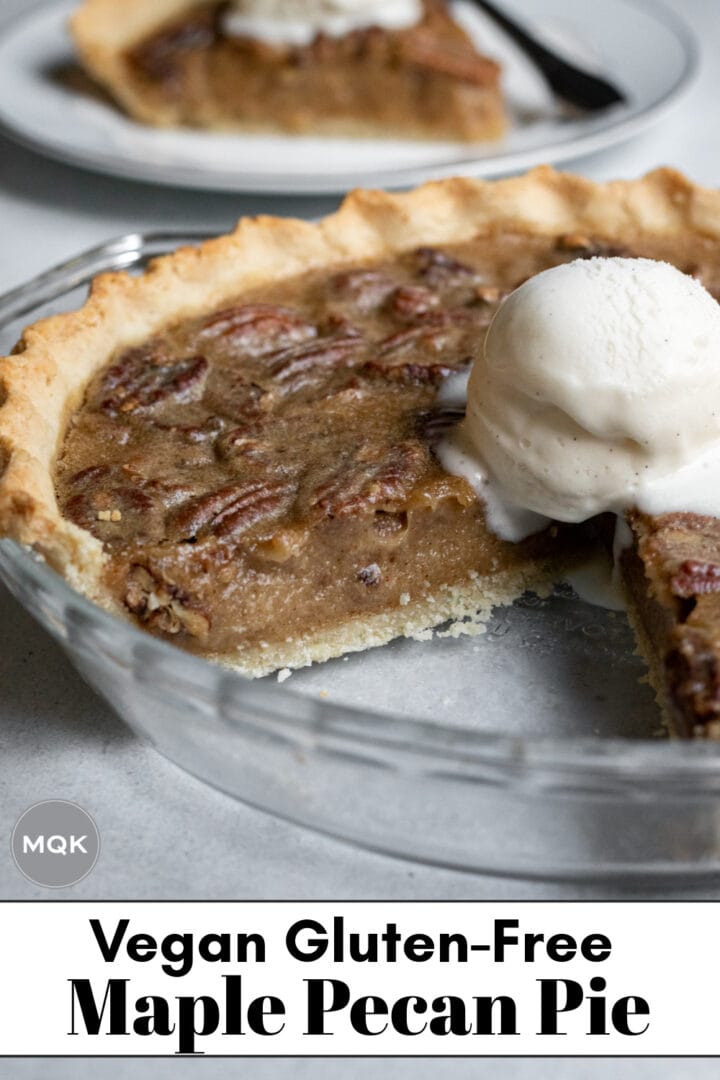 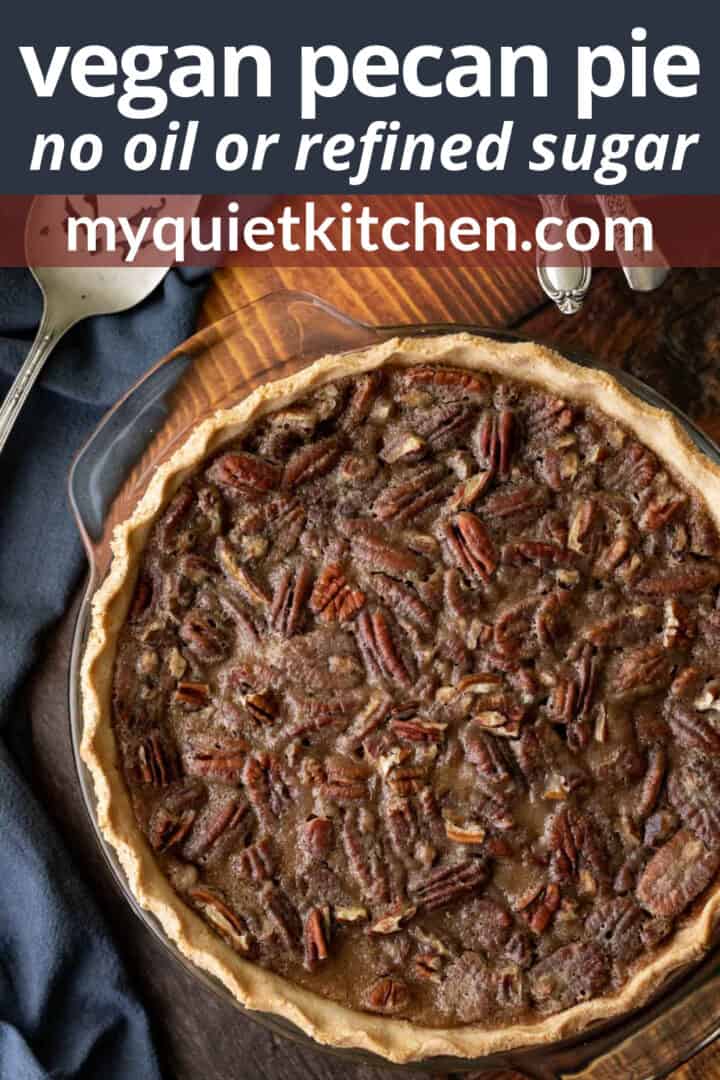 This vegan pecan pie has all of the sweet, salty, nutty flavor you want and is surprisingly wholesome! It's refined sugar-free, sweetened with maple syrup, and is not only dairy-free and eggless, but also FREE from gluten, soy, coconut, and oil.

This recipe was originally published September 2020 and has been updated with new photos and slight recipe change. I hope you love it as much as we do!

Though classic pecan pie is not vegan, it's amazing how many different and delicious ways there are to make a fully vegan pecan pie.

Growing up in Alabama, I ate my fair share of gooey, way-too-sweet, Karo syrup pecan pies. During the Thanksgiving and Christmas season, no party or family meal was complete without one!

But since my mom leaned toward healthier ingredients, she always made a maple-sweetened pecan pie. And I really grew to love the warm flavor of maple syrup and how well it pairs with pecans.

What makes this pie healthier?

Oats might seem like an unusual addition to pecan pie, but that's part of the fun! I'm a sucker for baking with oats. Heck, not even just baking, as evidenced by my vegan oat milk ice cream obsession.

From banana bread to cookies to vegan pumpkin pie, the neutral flavor and versatility of oats continue to save the day. It's also nice that they're inexpensive and readily available.

And the naturally gooey consistency of cooked oats works perfectly alongside maple syrup in this healthy pecan pie filling.

This is the third vegan pecan pie recipe on the blog, but it's the first one made entirely from whole-food ingredients. As much as I love the Salted Chocolate Pecan Pie I shared last year, It's possible I like this recipe even more!

This is a less-sweet vegan pecan pie that won't leave you with a sugar crash or feeling like you ate a brick. Gotta love that.

See the recipe card below for amounts and full instructions.

How to Make Vegan Pecan Pie

From start to finish, not including cooling time, preparing the pie takes about 1 hour.

While this pie is healthier and much lighter than traditional pecan pies filled with butter and eggs, it's definitely not low in fat. It is pecan pie after all!

However, if you try to reduce fat whenever possible, you can certainly reduce the amount of pecans to 1 or 1 ¼ cups (that's approximately half the amount found in traditional pecan pie).

I actually enjoy it with fewer pecans because it really allows the custardy maple filling to shine.

There's an option to include a bit of orange zest or cinnamon in the pie filling, and that's totally up to you! They're both fairly subtle.

The orange contributes a nice sweetness while cinnamon adds a touch of warming spice. Or skip them both for straight up maple pecan vibes.

You can also add a splash of bourbon or dark rum like in this Vegan Bourbon Pecan Pie.

Vegan pecan pie is especially great with a scoop of Vegan Vanilla Ice Cream on top. The contrast of cold and creamy ice cream with chunky pecans and crisp pie crust is hard to beat!

Or try it with homemade whipped coconut cream or store-bought dairy-free whipped topping like the one from So Delicious (not oil-free, of course, but it IS delicious, as the brand name promises).

Pecan pie is typically served cool or at room temperature. This is because the filling may become runny if served warm or hot. However, the filling in this vegan pecan pie recipe is more stable than most and can be served warm if desired.

Can I make it a day in advance?

Absolutely, especially if you use the vegan gluten-free pie crust linked in the recipe. It stays more crisp and holds up better than pie crusts made with flour.

How should I store pecan pie?

Either cover the whole pie plate with cling wrap or transfer the pie to an airtight storage container and refrigerate. Enjoy within 4 to 5 days, or freeze for up to one month.

Since ovens vary, I recommend keeping an eye on the pie during the last 10 to 15 minutes just in case the filling is getting too bubbly or the crust too brown.

If you use a traditional flour-based crust you might need to cover the edges of the pie with foil or a pie shield to prevent over-browning.

But if you use my Almond Flour Pie Crust recipe you won't need to worry about the crust getting too brown. It bakes up perfectly in this amount of time.

Tap to play the video and see how the pie is made.

I hope you enjoy this healthier, allergy-friendly vegan pecan pie. If you try it I would love to hear from you. Comment below to let us know! 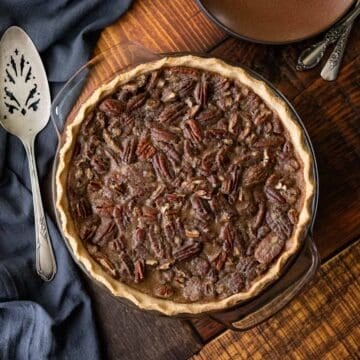 Storage and Serving Tips The gluten-free almond flour crust linked in the recipe holds up particularly if you'd like to make the pie a day in advance, better than traditional flour crusts. Keeps refrigerated for 4 to 5 days. Pecan pie may be frozen for up to 1 month. Thaw in the refrigerator overnight.